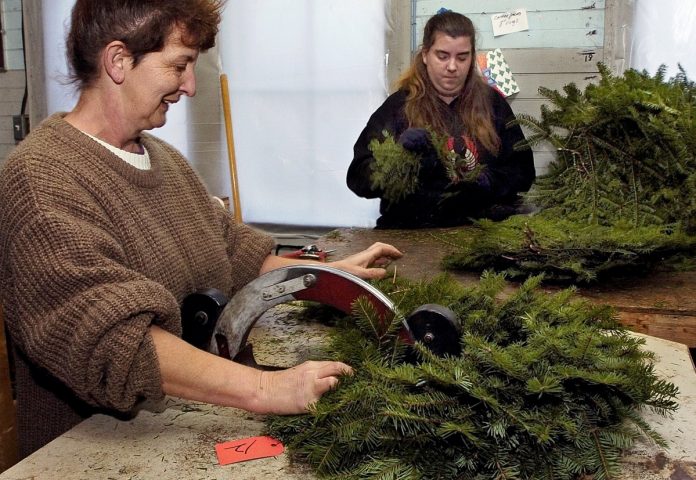 A Christmas wreath company in Norridgewock with a long history in the area has gone out of business, citing high shipping costs, and the building it occupied downtown is for sale.

“After owning my business for 22 years, I have been struggling with a decision since mid way through last wreath season,” says an undated post by owner David Bolduc on the website of Christmas Tree Acres Wreath Company. “It was not a question that I wanted to answer, but I had to face reality. It pains me to have to tell you, my loyal customers, that I cannot continue to operate. Putting it bluntly, shipping expenses have become too exorbitant.”

Bolduc is not alone among Maine wreath companies who have struggled to keep up with rising shipping costs. Such expenses are being driven by a change from UPS Inc. and FedEx in 2015 to standardize dimensional weight pricing, which incorporates both the size and weight, rather than just the weight, of a package.

“It’s hit anyone hard who has a fairly light product to ship in a fairly large box,” said Michael Leman, who owns Harbor Farm Wreaths in Ellsworth and said the cost of shipping has at least doubled in the six years he’s been in business. “It’s tough every year to try and come up with ways to make the boxes smaller and negotiate for better rates.”

“Every wreath producer I talk to is feeling different variations of desperation,” Kell said.

Jim Corliss, a longtime board of directors member of the Maine Christmas Tree Association, is in his final season running the Piper Mountain Christmas tree farm in Newburgh, which also makes wreathes. Corliss said the struggles for wreath-makers in Maine and beyond just keep mounting.

Piper Mountain charges $26 per wreath, with $13 for shipping east of the Mississippi and another $1 westward.

“Absolutely, shipping has become a bear,” Corliss said, saying the mailing companies have jacked costs severely the last six years and added additional home delivery fees. “It’s got me a little unawares this year. We did not raise our price, and, of course, when you say shipping, you don’t just blame UPS and FedEx; it’s also the cost of the box, the cost of the labor to decorate that wreath and put it in the box.”

There’s also a growing challenge getting so-called “fir tippers” who bring in the balsam harvest from the woods, Corliss said.

“The tips that we used to make the wreaths for years was 25 cents a pound for people to go out into the woods. Last year we were paying 40 cents a pound. This year I was offering 40 cents and no one came until I discovered some people offering 50 cents in this area,” he said.

In Norridgewock, Christmas Tree Acres was once one of the largest Christmas tree farms in the state, and its former owner and founder, Dwight Newman, was a past president of the Maine Christmas Tree Association.

Bolduc did not respond to a message left on his home phone or an email sent to the business. A phone call to the number on a “For Sale” sign on the building at 69 Depot St. also was not returned.

Newman, who died in 2012, was a florist and greenhouse owner in Winchester, Massachusetts, when he started the tree farm on Sandy River Road in 1965. He eventually moved to Maine and with his wife, Nancy, started a mail-order Christmas tree and wreath business out of the Depot Street building, according to Newman’s obituary and Morning Sentinel archives.

Newman retired in 1995, at which point he sold the wreath company to its current owner, David Bolduc.

In the message on the website, Bolduc talks about shipping expenses increasing more than 27 percent in a single year. It said the average cost for shipping a wreath is $18 to $20 each, but the company charged only $11.25 for shipping.

Leman, the Ellsworth wreath maker, said that sounds about right. His company ships about 6,000 wreaths each year to places all around the country. Six years ago, he said the average shipping cost per wreath was about $8 to $12, with $12 for wreaths going to the West Coast.

The U.S. Postal Service is also an option, but the rates are generally more expensive than UPS or FedEx to ship wreaths across the country, Leman said.

Representatives for both companies said in emails that dimensional weight pricing is a common industry practice, and they have efforts in place to help customers improve their packaging practices.

“It allows us to make the best use of space in our vehicles and encourages customers to make packaging adjustments,” said FedEx spokeswoman Rae Lyn. “Ultimately, more efficient packaging is good for our customers and increases the sustainability of our operations.”

But Leman said, “When they did that, our shipping costs went through the roof pretty much overnight. We’re a medium- to small-wreath company, so we’re able to negotiate slightly lower rates only because of the volume we ship. A lot of these smaller wreath companies don’t have the volume.”

He said he’s considered talking with other wreath purveyors to see if they could form some sort of collective bargaining group, so that smaller businesses could negotiate together on shipping deals.

“Every year it’s a problem — shipping costs,” said Tom McCarthy, owner of Central Maine Wreath in Skowhegan. “UPS has a monopoly on everything. The post office is no longer competitive, so you’re caught.”

McCarthy said he didn’t know when the Norridgewock company went out of business exactly, but he estimates he’s absorbed some of the product from “fir tippers” who harvest and sell boughs.

At Maine Wreath & Flower in Freeport, owner Debbie Cupo said pricing by size has affected her business too, but there’s not much she can do to change the size of boxes or get a better rate.

“It just affects the bottom line,” Cupo said. “I don’t make as much money.” She said she is not willing to pass on the extra cost to her customers. “They’re unconditional, so I just don’t make as much. It’s difficult.”

Winter wreath making is a New England tradition, and Cupo said she sends her products to customers around the country. Most of her sales are sent out of state.

Kell, of Kelco Industries, said the early winter storms this year have “kept people out of the woods who would be collecting the tips, and every wreath producer is behind by a week to 10 days.” His company produces about 5 million wreath rings annually, of which about 25 percent, or 1 million, are sold to wreath-makers in Maine, suggesting the state probably has a few thousand wreath-making operations.

Kell said another small industry trend is the “buy-local” movement that has wreath-makers popping up in other parts of the country, decreasing the demand from traditional sellers in New England. Higher shipping costs contributes to this trend as well.

“Even after the recession in 2008, shipping costs are going up 4 or 5 percent a year,” Kell said. “And they add on fees for going to a remote location, which means pretty much every location in Maine.”

In Norridgewock in 2005, the Morning Sentinel photographed seasonal workers turning locally picked boughs into brightly decorated wreaths, fir roping and centerpieces tied with bright red ribbons at Christmas Tree Acres in Norridgewock. Bolduc estimated at the time the decorations were being sent to all 50 states and Puerto Rico and he employed about a dozen people seasonally.

“I have a long history with many of you,” Bolduc wrote to customers in his final message for the business. “You know my love for this business and what it means to me emotionally, so with great sadness I have to say farewell.”

Corliss, the longtime Maine tree association board director, said he doesn’t know what the future holds for Maine’s wreath-making industry, and he’s not surprised when he hears about small companies like the Norridgewock operation closing after many years.

“I thought there was a good future in it, but I don’t know how much people are willing to pay. We’re not making enough on it to make it worthwhile,” he said. “It will continue until people won’t pay the price, and then it will come to a screeching halt.”