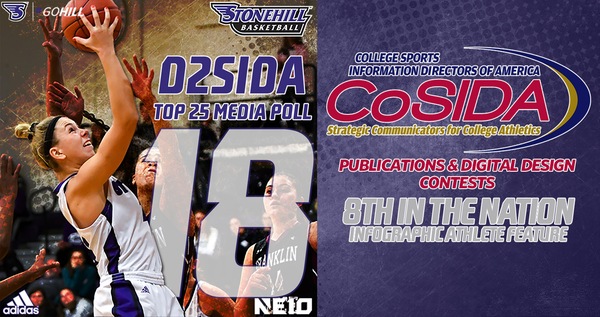 EASTON, Mass. (August 10, 2018) – Stonehill College’s Athletic Communications Office has been recognized by the College Sports Information Director’s of America (CoSIDA) for excellence in publications & digital design for the third time over the last five years.

It caps an impressive year of honors for the Stonehill Athletic Communications Office, kicked off by Archetto earning the U.S. Track & Field and Cross Country Coaches Association (USTFCCCA) Excellence in Communications Award for Division II Cross Country, Monson being voted to the ECAC-SIDA board and the office also receiving the American Volleyball Coaches’ Association’s Grant Burger Media Award for the NCAA Division II East Region.

The Stonehill graphic that received the recognition was one of its “poll graphics” highlighting the women’s basketball team’s No. 18 national ranking during the 2017-18 season in which it captured the Northeast-10 Conference regular season championship on its way to the third NCAA II East Region title in program history and a trip to the Elite Eight. Stonehill is the lone institution from the East Region to earn an award from the CoSIDA Publications & Digital Design committee in 2017-18.

Stonehill’s Athletic Communications office is responsible for publicity and promotion of all 21 of its varsity athletic programs. The office maintains all content on the official athletics website, www.stonehillskyhawks.com, produces game programs, game notes and other preview information and recaps for events, all live video broadcasting, including live event coverage through its digital streaming platform, postgame highlights, student-athlete and coaches interviews and feature stories, and oversees all official athletics social media accounts, while producing content on the athletic department’s main accounts.

With 21 intercollegiate sports, Stonehill boasts one of the top athletic and academic programs in the country. Stonehill has finished in the top three of the Northeast-10 Conference Presidents’ Cup standings for overall athletic performance 14 straight years, following a third place finish in 2017-18. The Skyhawks have received the NCAA Division II Presidents’ Award for Academic Achievement each of the first seven years of the program’s existence of honoring institutions with an Academic Success Rate (ASR) of 90-percent or better. Stonehill has earned a 97% Academic Success Ranking (ASR) by the NCAA, which considers the academic success rate of the institution based on the graduation rate of student-athletes, good for fourth among all NCAA Division II institutions, with ten Skyhawk teams receiving a perfect rating of 100%. In addition, the Skyhawks are ranked third in the National Collegiate Scouting Association (NCSA) Power Rankings for Division II used to assess the academic and athletic standards of all NCAA and NAIA athletic programs.