Home Office Although years from moving into its new South End tower, Lowe’s is... 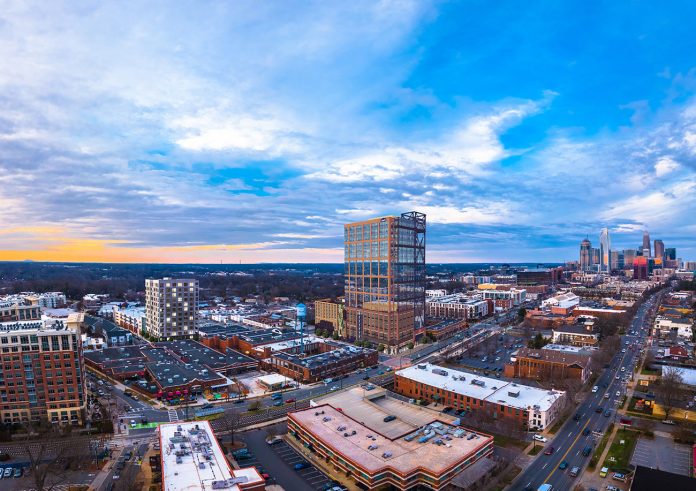 Lowe’s is still years away from moving into its new tech hub in South End, but the Mooresville-based corporation has already begun aggressively recruiting for the facility.

Lowe’s broke ground earlier this month on the 23-story Design Center Tower, formerly the site of a parking lot at the corner of Worthington and Camden near the light rail.

Already, Lowe’s has about 150 employees — made up of new hires as well as transfers from Mooresville — working at its temporary tech hub at the Charlotte Plaza. That’s the tower at 201 S. College St., home to Grant Thornton and other tenants. The office has space for about 1,500, Lowe’s CEO Marvin Ellison told the Agenda.

Lowe’s wanted to prioritize hiring right away for competitive reasons, Ellison said. The South End tower won’t open until late 2021, the company said when announcing plans for the project this summer. Lowe’s expects to employ up to 2,000 tech professionals at the facility.

As the hiring ramps up, Lowe’s chief information officer, former Target exec Seemantini Godbole, is putting together a map that outlines which functions will be located in the Lowe’s global tech center in South End versus which positions will remain in Mooresville, Ellison added.

What Lowe’s wants: Lowe’s is looking for highly skilled workers for a variety of jobs, including analysts, architects, developers, user experience designers, software and infrastructure engineers and product managers. All the job listings for the tech center can be found here. Lowe’s has said the average salary for the new jobs will be $118,000.

New hires will be tasked with making Lowe’s a modern technology-focused company. That includes, for instance, developing and improving the mobile software Lowe’s gives to its store employees. With it, workers can retrieve data about any given product, such as how well it’s selling or when it’ll be restocked.

Developments like that help free up time so that a store employee can spend more time with customers, Ellison said. New hires will also help Lowe’s transition its entire e-commerce platform to Google Cloud.

“As long as you’re in retailing, manufacturing, automotive … you pick the sector, you have to be cutting edge in technology, otherwise you’re falling behind,” he added.

Lowe’s sees its new facility as a way to build up the tech community in Charlotte and surrounding areas.

Many of the students graduating from competitive schools in North Carolina are leaving the state because there’s not a “beacon of employment” in the local tech industry that would attract them, Ellison said.

“Our goal is to build this global tech center and invite other companies to come in and do the same,” Ellison said. “As other companies come in, it’s just going to be more of a magnet for more technology talent.”

Zoom out: Lowe’s considered Dallas and York County for its new tech hub before ultimately picking Charlotte. Lowe’s is slated to get up to $54 million in state incentives for the project, along with over $16 million in local grants from the city and county.

The incentives are expected to be paid out over several years, so long as Lowe’s meets the job-creation goals it laid out.

Other Lowe’s news: Lowe’s recently announced that it is expanding its corporate partnership with the Carolina Panthers. The deal includes naming rights to the gate at Bank of America Stadium closest to Mint Street.

Lowe’s also a few weeks ago cut several jobs from all of its stores nationwide. The affected roles were non-customer-facing, such as maintenance and assembly, and were transitioned to a third-party provider. Ellison noted that the company has hired elsewhere, however, including nearly 500 assistant store managers, and roughly 5,500 department supervisors.

“Although those positions did transition to a third party, the net effect is that we’ve hired more people this year than we did last year,” Ellison said.