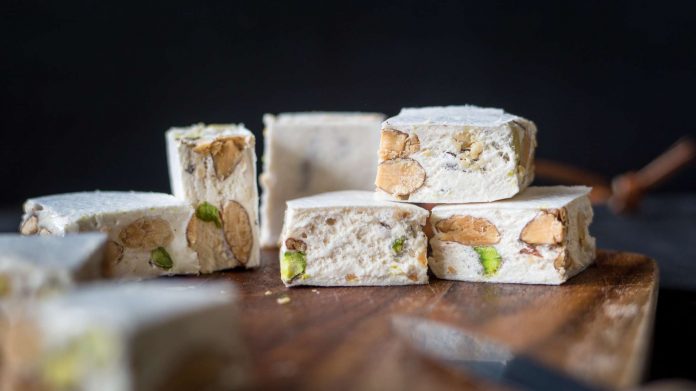 Of the many curious holiday traditions (figgy pudding? wassailing?), one of the oddest has to be spraying down small trees with a mixture of adhesive and cellulose fibers to satisfy our longing for a white Christmas.

That’s what’s happening when you adorn a tree with artificial snow, otherwise known as flocking. And yet, when decorated and lit up, there’s something beautiful and warmly nostalgic about a well-flocked Christmas tree. Here’s how professionals manufacture this Christmas miracle.

The History of Flocking

We’ve been trying to get that snowy look on Christmas trees for longer than you might think, dating back to the 1800s using substances like flour or cotton. A 1929 issue of Popular Mechanics recommended varnish, corn starch, and flakes of the silicate mineral mica.

But tree flocking as we know it really caught on in the late 1950s and 1960s, along with aluminum trees and other glitzy (if not natural-looking) decor of the post-war boom. General Mills marketed Sno-Flok home kits, to be applied using a gun that attached to a vacuum cleaner.

Such home kits are not so popular these days, says Tom Leonard, owner of Peak Seasons, one of the country’s largest manufacturers of Christmas tree lots supplies and tree flock. Flocking itself, however, has retained a level of appeal. “Sunbelt states use a lot of it because there’s no snow there,” Leonard tells Mental Floss. “It’s tremendously popular. The West Coast, the South, and the Southeast, the vast majority of it is sold in those zones.”

The Science of Flocking

So what exactly is flocking? At its core, flocking means attaching tiny fibers to a surface to create texture (the process is also used in fashion, home decor, and crafts). The Peak Seasons recipe includes paper pulp as fiber, corn starch as adhesive, and boron as a flame retardant—there’s a safety benefit to flocking.

And the company makes a lot of it. Leonard says they’re the largest manufacturer of flock in the United States and Europe. “I don’t want to share [how much], but we sell lots of flock. I mean truckloads and truckloads.”

Based in sunny Riverside, California, Peak Seasons starts with paper and a grinder. “It’s like a big roll of toilet paper and it weighs a ton and you feed it into a machine and it comes out a powder,” Leonard says. The exception is certain bright colors—flock comes in white, black, pink, ice blue, royal blue, red, green, gold, and purple—which require cotton fibers instead of paper to hold the dye. The final product is almost like baby powder, shipped all over the country in large, cement-bag-sized bags.

From there you need to affix the stuff in a nice even coat, which is where flock machines like the Mighty Sno-Blower come in. They’re basically big tanks that hold varying amounts of flock depending on the model, plus a mechanism at the bottom to fluff up the powder. The machine then pumps the powder through a hose, and a gun at the end mixes it with a mist of water.

And that’s how flock is born.

The Art of Flocking

You don’t have to go with a professional flocker, or even use manufactured flock. There are all sorts of DIY recipes that include things like soap flakes or even desiccated coconut flakes. But if you do go pro, you want to be in the hands of someone like Paul Iantosca, who has been flocking trees in the Boston area for 20 years.

Flocking one tree in bright purple (white is still most popular), Iantosca first sprays it down with water. Then, in an area closed off with plastic sheeting, he fires up the blower and blasts the tree evenly with what looks like a purple fog. The stuff gets everywhere. He wears a mask to keep it out of his nose, but some high-volume flockers wear full protective coveralls.

The tricky part to flocking is that you can’t tell if you got it right until it dries. When it goes on, it’s cold and wet like paste. But as it dries, the Christmas magic kicks in and it puffs up, turning into fluffy white (or, in this case, purple) fuzz firmly affixed to the needles.

There are, of course, pitfalls. Not enough water, and the flocking falls off and makes a huge mess. A flocked tree can’t get wet a second time. “It won’t dry again. It’s disgusting actually,” Iantosca says. Also, when you flock a tree, the color highlights its flaws. A janky tree turns into a weird, uneven shrub.

But if you get it right and string it up with lights, you’ve got a real stunner on your hands. Iantosca’s had flocked trees for his own home for the past 10 years and his kids won’t let him go back.

“When you plug that thing in, it absolutely glows inside,” he says. “It’s unbelievable.”

Have you got a Big Question you’d like us to answer? If so, let us know by emailing us at [email protected]

An earlier version of this article ran in 2015.