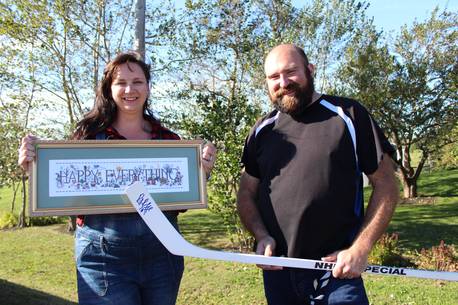 VERNON RIVER, P.E.I. – Nothing could come in the way of seeking out some treasures during the 70 Mile Yard Sale for one Charlottetown couple.

“We planned our wedding around it to make sure we’d back from our honeymoon in time to do it,” said Charlottetown resident Jessica MacPherson.

MacPherson and her husband Duane Pineau have been thrifting through the sites of the 70 Mile Yard Sale since the start of their relationship five years ago.

The two tied the knot last year, making sure to plan around the Kings County based event, which is made up of over 350 yard sale sites.

They took a break from renovating their house on Saturday to see what they could find at this year’s event.

“Right now, we have to have everything renovated in our house by Tuesday because it’s going up for sale and we said ‘nope we’re taking today off so we don’t miss this’,” said Pineau.

They were not disappointed.

“We didn’t really know what we would need but when I saw this I knew it had to be in the new house,” said MacPherson, holding a $30 crocheted sign of the words “Happy Everything” with designs from different holidays and seasons on it.

She found it at Green Gay Bulls Bed and Breakfast in Vernon River.

“It’s going to be the first thing that we put in the new house that you see every time you walk through the door,” said MacPherson.

Pineau’s great find of the day happened around Montague when he found a hockey stick.

It seemed like an ordinary hockey stick at first, until Pineau looked closer.

“I picked it up and there was a piece of tape on it that said ‘autographed Ray Bourque stick’,” said Pineau. He looked around, shouted for Jessica and “wouldn’t let go of it after that.”

Pineau has been a fan of the former Boston Bruins defenceman since he was 10-years-old.

The couple quickly Googled Bourque’s signature to make sure it was authentic. When they discovered it was, they finalized the $10 purchase.

“This will be hanging in the new place,” he said.

MacPherson and Pineau often run into their friends at the different yard sales where they compare finds.

Since they go every year, the couple has also gotten to know many of the vendors.

“They see you coming and check in on how your year was,” said MacPherson. “It’s just fun to meet up with everyone again.”

The reason the couple enjoys the yard sale is because of the scavenger hunt aspect.

“You’re going to find something different every time you go out and you may be looking for something completely different,” said MacPherson.