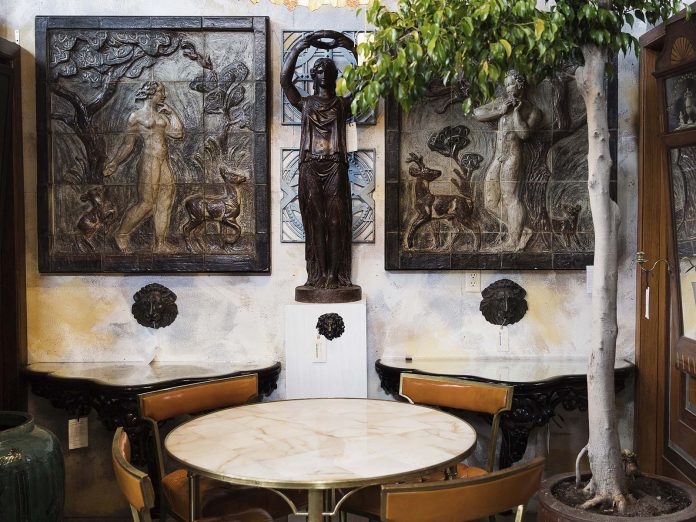 Denver’s decorating scene is better than ever, especially when it comes to locally owned boutiques: There’s one for every design style, whether you’re a dyed-in-the-wool traditionalist, midcentury-modern enthusiast, or someone whose aesthetic defies definition.

Neighborhoods: Cherry Creek North and Union Station
When Alice fell down the rabbit hole, she must have felt a bit like customers do upon entering this Cherry Creek boutique for the first time: completely enchanted. “The stores are supposed to feel like a fantasy world, a curated treasure hunt,” says owner Anuschka Pashel, who opened a sister store at Union Station in 2014. A former model who began traveling the world at 18, Pashel now brings the world to her storefront: You might spot a 6-foot-tall Balinese carved-stone sculpture, paintings by European artists Sabine Maes and Matti Berglund, ceramic origami-inspired incense holders, and a Brazilian quartz-crystal cluster (a striking focal point for your foyer) that weighs more than 200 pounds.
What’s New: A collection of Moroccan wool rugs, from Beni Ourains to flatweaves, picked by Pashel.
300 University Blvd. and 1701 Wynkoop St.

Neighborhood: Denver Country Club
If House Beautiful magazine were a shop, it might well be the Lark, a Dutch-doored storefront that’s lured traditional types with ginger-jar lamps, fox figurines, and boxwood topiaries since it opened in Country Club in 1970. “It’s so Larky is one of my favorite sayings!” says owner Jill Livran. Locals stop in for tins of key-lime cooler cookies from Savannah, Georgia, and Simon Pearce’s glassware, hand-blown in Vermont.
What’s New: Refillable, liquid paraffin oil taper and pillar candles from New York-based Lucid Candles—buy once, use forever.
1219 E. Fourth Ave.

Neighborhood: Athmar Park
Eron Johnson was a high schooler when he began salvaging doors, mantels, and stained glass from 19th-century Denver homes marked for demolition, an obsession that led him to found his namesake store in 1972. His new location on South Lipan Street—open by appointment—is an antiques cache worthy of however much time it takes you to explore the depth of its riches. Here, you’ll find everything from pieces of an oak-paneled room from 16th century Suffolk, England (once part of the collection of the Denver Art Museum and now yours for a cool $190,000), to an early-20th-century cast-aluminum streetlight from Chicago’s Burnham Harbor. But don’t be daunted by the grandeur: Many pieces are priced under $500.
What’s New: Current inventory includes design names you know and love—architectural pieces by Frank Lloyd Wright and Louis Sullivan, glass from Louis Comfort Tiffany, and original furniture designed by Swiss starchitect Pierre Jeanneret.
377 S. Lipan St.

Neighborhood: Englewood
For proof that change is good, look to mother/daughter duo Christy Brant and Caitlin Marsh, who moved their beloved Lulu’s from LoHi to Englewood in April. Now, floor-to-ceiling windows allow natural light to illuminate their hand-picked wares, including copper windows salvaged from New York City’s Hotel McAlpin and a modular sectional from Robin Bruce that transforms into multiple configurations. “We strongly believe that good design should be functional and doesn’t have to be outrageously expensive,” Brant says. Further evidence that the boutique is relatable, not stuffy: the shop dog, Whistlepig.
What’s New: Canadian furniture line Sunpan—a fount of clean-lined pieces—and Zents, a Colorado-based toiletries collection with scents like fig and water.
3475 S. University Blvd., Englewood

Neighborhood: Cherry Creek North
The ironic thing about a store called Homebody—which debuted in October 2017—is that it’s a favorite among the most well-traveled design connoisseurs. Owner Dory Pratt scours the continents for design finds, from a 1970 abstract painting unearthed at a Paris flea market to an $8 set of mother-of-pearl-and-wood caviar spoons. “Opening Homebody allowed me to do two of my favorite things for a living: travel and shop,” Pratt says. She’s also the consummate hostess: The shop has a complimentary coffee bar and wraps gifts—gratis—in their signature botanical-print paper.
What’s New: Homebody is now selling Swedish Byredo fragrances and Astier de Villatte ceramics made from black clay and finished with a snow-white glaze—both excellent gifts for design-lovers this season.
2920 E. Sixth Ave.

Neighborhood: South Broadway
Nearly 70 percent of the furniture within this 25,000-square-foot space was imported from Scandinavia, including pieces whimsically hand-painted in the 1800s—just one reason why we start swooning the second we walk in the door. Owner Henrik Follin, who was born in Sweden and grew up in Denmark, launched the company in 1994; it’s now the place to find the extremely rare (a 19th-century inlaid mahogany Empire secretary) and the extremely sweet (Swedish copper baking molds, which make charming kitchen decor). Oenophiles should look for the Hungarian wine press, hewn of oak in 1924.
What’s New: Custom-made maple-wood tables created from salvaged boxcar floors, still displaying the rich patina earned through years of wear.
1760 S. Broadway

Neighborhood: South Broadway
If you subscribe to Chip and Joanna Gaines’ Magnolia Journal and binge-watch Fixer Upper, you’ll think Old Glory is, well, glorious. The 100-year-old South Broadway storefront brims with well-loved old pieces and artful new finds, from a well-worn 1900s French baker’s cabinet with original hardware to $1 Sugarboo & Co. quote cards with wisdom from Benjamin Franklin, Helen Keller, and other brilliant minds. Denver-based owner and founder Holly Kuhn grew up in Texas, where her love of Americana took root; that passion is reflected here and in Old Glory’s other location in the antiques-opolis of Round Top, Texas.
What’s New: Kuhn’s first decorating book for Gibbs Smith, as yet untitled, hits bookshelves in July 2019.
1930 S. Broadway

Neighborhood: RiNo
Opened in RiNo in September 2017 by Mary Wright, Design Wright Studios’ showroom is an architecture enthusiast’s dream: a former refrigeration unit for the Gold Star Sausage Company, with 22-foot-high ceilings and oversized windows. It’s also a go-to for Denverites looking for furnishings from today’s boldface design names (Kelly Wearstler) and classic manufacturers (Stanley Furniture). “We love what we do and make it fun for everyone who walks in the door,” says Wright, noting that they offer beer on tap and have a fridge stocked with wine and champagne. Bonus: After you’ve picked out your gorgeous new HC28 armchair, explore the lovely inventory at Artisan Rug Gallery, the other stellar store that shares the space.
What’s New: Ralph Lauren fans devastated by the closing of the brand’s Cherry Creek Shopping Center location can breathe a sigh of relief: Ralph Lauren Home is now available in Denver again, right here.
2800 Walnut St.

Neighborhood: RiNo
Italian-modern fanatics flock to this 20,000-square-foot RiNo showroom for kitchens, closet systems, and other truly exquisite finds, such as a sectional sofa by Minotti that retails for around $30,000, and Moooi’s Perch table lamp, which resembles an oversized origami crane resting on a gilded perch. “There is a misconception that Italian furniture does not fit with the mountain lifestyle,” says founder and president Brad Fentress, “but we have styled our showroom to prove this is not at all the case.” The impressive space shows off steel beams and worn-concrete floors, not to mention a dreamy terrace overlooking the Front Range.
What’s New: Lighting from Barcelona-based Santa & Cole, which curates fixtures designed by icons including Arne Jacobsen.
2535 Walnut St.

Neighborhood: South Park Hill
In 2001, long before midcentury-modern design became cool again, Mod Livin’ was here, reviving all our latent Bewitched-era decorating desires. Owned by a wife-and-husband duo, the East Colfax shop is a cache of Technicolor furniture finds, all housed in a former liquor- and drugstore. (Currently on offer: a collection of Knoll furniture purchased from the owner of Denver’s first Knoll dealership). Don’t miss the subterranean Bargain Basement, where vintage and new finds are marked down by 25 to 75 percent.
What’s New: An expanded collection of leather furniture by Blu Dot, a Minneapolis-based company that just won the National Design Award from Cooper Hewitt, Smithsonian Design Museum in New York City.
5327 E. Colfax Ave.

Neighborhood: South Broadway
If your favorite museum is MoMA, consider this new Antique Row storefront your utopia. Opened in May by midcentury enthusiast and pro picker J. Kendel Johnson, it’s the place to find expertly restored, 1950s George Nelson for Herman Miller dressers, or a set of Ludwig Mies van der Rohe-designed Barcelona chairs—often at prices that rival anything you’d find at CB2. Decor is in Johnson’s blood: “My parents had retail furniture stores in southwest Oklahoma and north Texas when I was growing up, and I learned every aspect of the business,” he says. “About the same time, I was also learning about antique furniture reselling from my aunt and uncle. Going picking with them—which they always called ‘scrounging’—felt like high adventure.”
What’s New: Local artisan-made objets, including Danish-style turned-wood candlesticks from Longmont-based Cream Modern.
1460 S. Broadway

Just a stone’s throw from I-25, the Denver Design District (housed in a former Montgomery Ward department store) is a Shangri-La for interiors-obsessives—and no, contrary to popular belief, you don’t have to be a card-carrying interior designer to shop its 34 showrooms. Here, everything you should know—so you can shop the district like a pro.

5280 Home chatted with Jo Mabary, director of marketing and leasing for the Denver Design District, to gather intel on Colorado’s interiors mecca.

5280 Home: Most important question first: Can anybody shop here?
Jo Mabary: Yes! You can browse anytime with no appointment. Most showrooms require a designer to make a purchase; we always have one on duty, complimentary. When you come in the West Building, the receptionist will give you a card with the designer’s phone number on it. He or she will join you wherever you want to make a purchase and facilitate it. You’ll pay net price, plus 20 percent, which is still way under retail. Let’s say you’re purchasing something for $100: The designer’s net price is $60, which means you get it for $72. For people who are looking to hire an interior designer, we also have a free referral program; take a look at denverdesign.com for details.

So what will a shopper find inside?
There are more than 1,400 manufacturers, many of which are represented exclusively here, with custom and curated items that can’t be purchased anywhere else in our five-state region. If you asked, “Where should I go to buy tile?” I’d give you six showrooms. For furniture, I have multiple showrooms. They each have their own personality.

OK, last question: What’s new at the Denver Design District?
We’re in the midst of a total transformation—we’ve had a number of showrooms expand and relocate, and we’ll soon have a total of 36: [Interior-designer favorite] Circa Lighting is coming in spring of 2019, as is Mod Design, a showroom with specialty lines from around the world.

In The Know: They Call It Not-So-Mellow Yellow

If, during a drive on northbound I-25, you’ve ever gawked at a certain canary-yellow sculpture that seems taller than Longs Peak, you’re not alone. What exactly is that thing, and why is it in front of the Denver Design District? “It’s called the ‘Articulated Wall,’ and it’s an 85-foot-tall sculpture by Bauhaus designer Herbert Bayer,” Jo Mabary explains. “The first one was created in Mexico City for the 1968 Summer Olympics, but ours is the tallest. It’s constructed of 32 pieces of prefabricated concrete around a ceiling mast of a ship.” The piece was donated by the Denver Design District’s former owners to the Denver Art Museum, and it’s now part of the DAM’s outdoor sculpture exhibition. Should you ever want to paint your front door the sculpture’s eye-catching hue, feel free: It’s Benjamin Moore’s Bright Yellow. Zing!

Learn the Lingo: To The Trade vs. To The Public

When something is sold “to the trade,” that means it’s sold only to designers, architects, and other design-industry pros. “To the public” means anyone can buy it. All showrooms in the Denver Design District sell to the trade, but only some allow the rest of us to make purchases directly. It’s always OK to ask for each showroom’s guidelines.