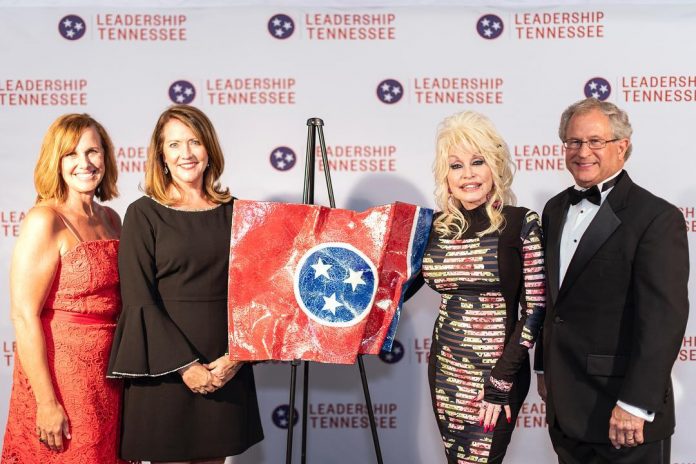 NASHVILLE, TENNESSEE – Leadership Tennessee held its Fifth Anniversary Gala, where members of the first five classes along with members of the new sixth class were invited to celebrate the accomplishments of the organization’s efforts to enhance their local communities and move the state of Tennessee forward.

In addition to the celebration, three organizations were selected from a wide field to receive grants from Leadership Tennessee to better their missions. Dolly Parton was also presented with the Inaugural Dolly Parton Excellence in Leadership Award due to her lifelong commitment to the betterment of the lives of people in the state of Tennessee which include her 12.5-million-dollar fundraiser for the victims of the Gatlinburg wildfires in 2016 and her Imagination Library outreach program that provides free books to children, regardless of income.

Michael Strickland designed the lighting for the space, painting the room with a nightclub ambiance for the dinner, stage presentations and dance floor. Aaron Swetland and Vanessa Sexton provided on hand support with assistance from Project Manager Don Lockridge.

Due to the magnitude of the event, Bandit’s team strove to be strategic with cable placement and the use of lighting fixtures to enhance the space rather than distract. Eight towers were outfitted with VL 2500s and placed around the room, providing gobos and patterns. The towers were also covered in white silk and spaced out along the floor to ceiling glass windows at the Country Music Hall of Fame event space, lit internally with Elation Sixpar 100’s.

“The Freedom Pars were a godsend,” expounded Sexton. “We had 60 pars and a lot of ground to cover so we charged them up at the shop and set them to red and blue (every other) and colored the entire room, lobby, and green room in them. Not having to cable any of them and just set them and forget them was great. They are perfect for corporate events AND we had them running around 2:00 PM to 11:30 PM and didn’t even touch the battery life at all!”

“Dolly has worked tirelessly to make the world aware of the great quality of life, business and people in her native state,” finished Strickland. “No one has worked any harder or more effectively than Dolly Parton. Governor Bill Haslam and Crissy were in attendance and were excited to so honor Dolly. After a warm and gracious acceptance, the ever-charming Dolly broke into an a cappella song to end the night.”

Bandit Lites is a global leader in the entertainment lighting marketplace.  From touring productions to fixed installations, Bandit Lites has a full staff of highly trained professionals to deal with all types of lighting needs. Bandit’s global presence will insure seamless transitions no matter where your next show takes you.  More information available at www.BanditLites.com