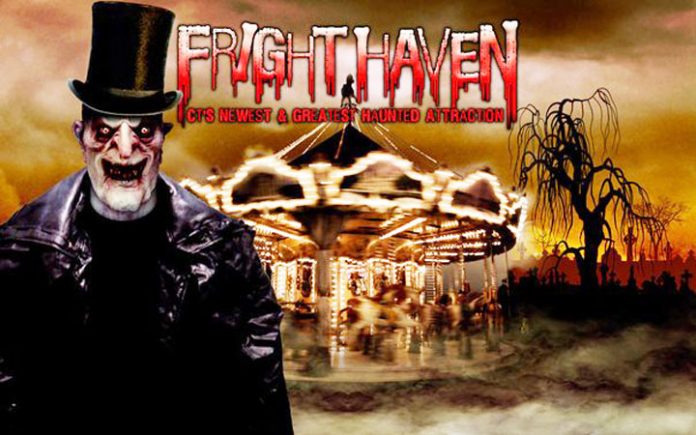 The 20,000-square-foot entertainment venue is the only professional indoor haunted attraction between central Connecticut and New York, according to a press release.

Fright Haven opens at 7 p.m. Thursday, Friday and Saturday nights in October and every night Halloween week. All attractions are indoors so unlike outdoor haunts Fright Haven is open rain or shine (the more thunder and lightning the better!) and is completely handicapped accessible.

Fright Haven has served as a fundraiser for numerous schools and organizations, with the title benefiting charity for 2018 being Stratford PAL (Police Activities League).

In an effort to raise the bar for Halloween scares, Fright Haven has completely redecorated and revamped its interior with three new themed attractions:

“Slip out of your mind and into the dark world of The INSANEatarium, an asylum with questionable methods of treating its patients. For fifty years, the doctors conducted heinous experiments on the mentally deranged, stripping them of their humanity and taking many lives. In their old age, they grew forgetful…all it took was one unlocked cell to end their reign of terror. Free at last, the inmates have taken over the hospital and have started conducting their own experiments on the remaining doctors and nurses. With mangled bodies strewn across rusty operating tables, bloody torture devices hidden around every corner, and the the buzz of electroshock instruments ringing in your ears…you just might lose your mind too.”

“You’ve managed to escape The INSANEatarium, with the psychological scars to show for it. Now what? You find yourself in a dark forest, cold air biting at your neck and the distant shrieks of asylum inmates far behind you. In the distance, a light appears. You rush towards it, seeking help, but are greeted by toothless grins and the smell of burning flesh. A family of cannibalistic rednecks have taken over the land, and they don’t take kindly to intruders. Find your way through their chaotic junkyard and putrid swamp, or risk being caught and cooked for dinner.”

“Spaz has always been…different. From the day she donned her green jumpsuit and painted on a black smile, the world has never quite been the same. Now, step right up, as you’re invited to take a look into her dark carnival of a brain. This neon wonderland features the creepy crawlers and sideshow freaks that occupy Spaz’s mind. As her mind runs wild with haunted thoughts, you might even meet some of her harlequin friends along the way.”

New and past visitors alike will be blown away by the new sets, props, decor, lighting, special effects, illusions and the scare-actors (scare actors), but possibly the most striking upgrade will be the amazing world-class visuals updated in the 3-D attraction.

All three very distinct haunted attractions are included in the price of admission. Additionally, there is a motion-simulator ride, “The Coffin,” photo ops, line entertainment and other surprises for attendees.