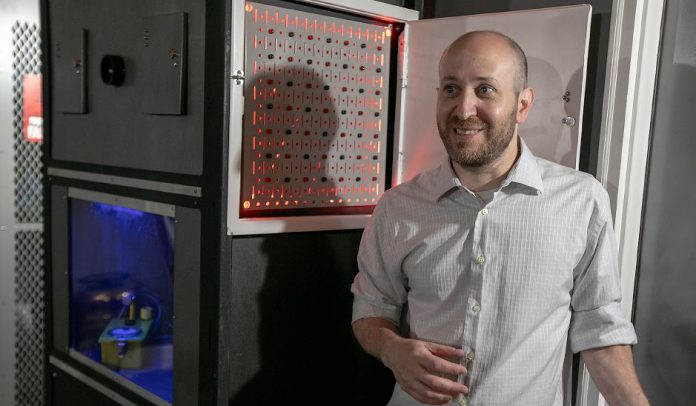 SOUTHINGTON — Puzzles and clues to their answer are hidden throughout the musty, aging and strangely empty apartment that’s one of two scenarios for players at Escapism at Factory Square.

Teams of six to 10 have one hour to solve all the puzzles in a room. In the case of “Do Not Disturb,” players solve the mystery of a woman who’s disappeared without a trace. For those in “Meltdown” the clues will lead them to averting a nuclear power plant disaster.

Ben Wyatt and Chelsea Zuniga opened the business this past weekend at 168 Center St. They’ve built the rooms and puzzles to immerse guests in the story with lighting, décor, sounds and smell.

In the “Meltdown” room, there’s a board that displays the nuclear reactor’s state with five minute warnings and alarms. That board also acts as a timer but fits the story better than a clock.

“It’s a more fun way to get people into the story,” Wyatt said. “It’s been fun to watch people get tense.”

Wyatt, a business developer, said he’s always wanted to start his own venture and has been working on this idea since building an escape room for his children in their basement. His background in mechanical engineering has helped him design the mechanisms for some of the puzzles while Zuniga has developed the aesthetic of the rooms and front waiting area.

Escapism serves prepared food from Paul Gregory’s so that those waiting for their session or those who’ve just completed one can get something to eat. Wyatt said he’s been in escape rooms and wanted a place for people to talk about their experience afterward so has set up tables, chairs and a bar in his suite at Factory Square.

Josh Norris, an owner and founder of Witchdoctor Brewing Company, said he was glad to have Escapism in the same building, drawing people looking for entertainment.

“When they’re done with that, who wouldn’t want to have a beer,” Norris said. “I’m excited about the people they’re going to bring.”

The owners of the brewing company, Escapism and nearby Paul Gregory’s are talking about “how we can do some things together,” Norris said.

He hasn’t tackled the Escapism puzzles yet, but plans to bring the Witchdoctor crew to the escape rooms soon.

Wyatt is working on building two more rooms. One will feature a heist scenario while the other will be set in a Mayan temple.

“It should feel like you’re Indiana Jones,” he said.