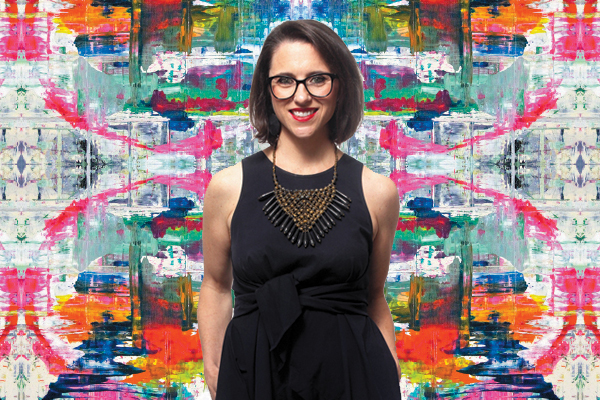 Wallpaper is having a moment. Though its popularity has waxed and waned throughout design history — mostly for the level of commitment it seems to require — it’s now lining walls and making statements everywhere. Best of all, we have a bevy of our very own wallpaper designers who call Richmond home. We talked to five talented women about how their wallpaper lines have taken shape.

Sarah Rowland always knew she wanted to create wallpaper. At an early age, she watched her mother’s free-spirited approach to decorating their own home, with a fearless use of color and bold mixing of patterns. Those artistic traits rubbed off on Rowland; she studied Communication Arts and Design at Virginia Commonwealth University and launched a career as a graphic designer, serving clients around the world.

Rowland officially started her wallpaper business in 2015 after toying with the idea for several years. Once her girls were grown and out of the house, she made the leap, but soon learned that producing wallpaper had its own set of unique challenges. It’s a major element in the design world that can take infinite directions — plus choosing a design is an emotional decision for most people, she explains. Still, through the initial start-up challenges, Rowland has created a niche of fun and graphic prints that evoke a playful, Midcentury Modern vibe.

Looking to the future, Rowland hopes to expand her papers for commercial use. She is in talks with a major wallpaper company to carry a line of her new designs, and is also collaborating with local lighting designer Wendy Umanoff to create shades for Umanoff’s lamps.

Rowland says she’s inspired by everything around her. “I love nature; it’s corny but true,” she says. She also observes spaces she encounters, whether residential or commercial, finding creativity at every turn. People inspire her as well. “I watch what people wear or if they have a tattoo,” she says. Rowland is also a visiting professor in VCU’s interior design department. “I love being around the students at VCU. I get so much energy being around them.”

The art of Dandridge “Dede” Davis is modern and organic, inviting a closer look at what the designs are really about. A graduate of Hollins University with majors in Studio Art and English, Davis says her experiences living, traveling and studying around the world are major inspiration for her work. She’s lived on the West Coast and traveled extensively in England and continental Europe, taking in the colors and cultures. She’s also visited a rhino sanctuary in Kenya, bringing elements of wildlife into her designs.

In addition to painting abstracts, Davis has been part of Richmond’s art landscape since the late 1990s, when she was a partner in Sunny’s Goodtime Paints. Starting her wallpaper line in 2016 was a natural next step, with her artistic leanings and practical experience with decorative wall finishes. She launched her first collection of prints in timeless neutrals; her second collection has moved into more brilliant colors, with details like animal skin and beetle shell designs blown up in a larger scale.

“It’s important to use art to communicate,. bringing joy and inspiration to others.” —Dandridge Davis

Davis says that her art and wallpaper designs come from “experiences in nature and life … dealing with different emotions.” A profound influence has been her son’s 2014 diagnosis of a rare pediatric cancer; he’s now a healthy 14-year-old boy, and through this experience Davis and her family have been grateful for healing and community support. “I believe God gave me my gift of art to encourage others,” she says, as shown in her 2015 “Healing Series” exhibition at VCU Massey Cancer Center. These works examine how the human body heals; a painting from that exhibition will be reproduced as a design in her new wallpaper line. “It’s important to use art to communicate, bringing joy and inspiration to others,” she says.

For Lindsay Cowles, wallpaper was not her original plan. Studying history at UVA with the intention to pursue a law degree, she quickly decided this was not her path. Post-graduation, living in New York for her career in fashion, then later moving to LA and experiencing the casual, carefree life of the West Coast, she still felt something was missing. One fateful day in 2010, when she came back home to Richmond, she found her sister painting in the basement of her family home and decided she wanted to try her hand at painting as well. She asked to borrow her sister’s supplies; her sister suggested she go get her own at the now-shuttered Main Art. This was the beginning of her journey creating abstract paintings that would become designs for wallpaper and fabric in 2012.

Cowles says she finds inspiration in simply working with her clients. “Finding that perfect shape or color can help launch a whole new world. People are craving something different, and I can do it!” she says. Travels and everyday life also inspire her expressive designs. Located in Richmond’s Fan District, her home and office are used as her testing ground; her painting studio in the Manchester area is where she spreads out and lets the art flow. “Everything is artful,” she says with a smile. “Just when you think a piece of art is finished, it’s just the tipping point for me.”

Cowles has just released new patterns and grounds (the raw stock on which wallpaper is printed), the newest being Alta Non-Woven, which has a lightly textured surface similar to watercolor paper. She is also launching a collection of rugs, taking her designs to a whole new level.

Interior designer Susan Jamieson of Bridget Beari Designs has been making her mark on the design scene since the early 1990s, in Richmond and all around the country. In 2012 she launched her own paint line, and custom wallpapers were a natural next step in 2014.

As an experienced interior designer, Jamieson says she knows what will work for wallpaper, from scale to proportion to getting the colors just right. “Being a designer, I know what I need,” she says. Jamieson is launching a new line of wallpaper this fall.

And on top of running a successful design business and managing her paint and wallpaper lines, in January Jamieson opened Bridget Beari Home Store at 1528 W. Cary St., where you can peruse her paint swatches and wallpaper samples in person, as well as shop from a curated mix of home furnishings, art and accessories.

“It’s fun trying to use my iPad, playing and changing colors. It’s all about being creative.” —Susan Jamieson

To capture ideas for her wallpaper designs, Jamieson carries a sketchbook just about everywhere she goes. “I might see something in a piece of lace or a pair of pants,” she says. She also makes sure she has her smartphone handy to take pictures of details that catch her eye when she’s out and about, so she can revisit and draw at a larger scale. “It’s also fun trying to use my iPad, playing and changing colors,” she says. Jamieson is also inspired by her many travels. “It’s all about being creative.”

Even after 20 years in the art and home decor business, Gibson is ever reinventing and making the old new again. In her early career, her housewares, starting with painted ceramics and evolving into lighting, pillows and other home decor, were being sold in some of the finest department stores. Her curiosity with pattern and imagery led her to a trade show in New York, where she met a creative director for Fabricut. This fateful meeting ultimately launched Gibson’s career in wallpaper and fabrics, starting with Stroheim (owned by Fabricut).

Everyday life is a muse for Gibson. “Nature, art and history inspire me,” she says. “I find ideas in old design books and magazines, in antique stores and museums. Everyday life is an inspiration.”

With all that inspiration, it’s no surprise that Gibson continues to produce designs for her wallpaper and fabric lines. She’s also launching a furniture collection this fall, bringing back traditional elements like claw feet and gilded, carved detailing in pieces with exposed wood frames and bold-printed fabrics. “This collection will be about glamorous but approachable designs,” she says.

Gibson is an advocate for wallpaper, encouraging people to embrace it, not be afraid of it. “Wallpaper is underused. It requires risk taking,” she says. “It’s hard to inherit someone else’s wallpaper.  You have to find what’s expressive of who you are and what’s speaking your name.”