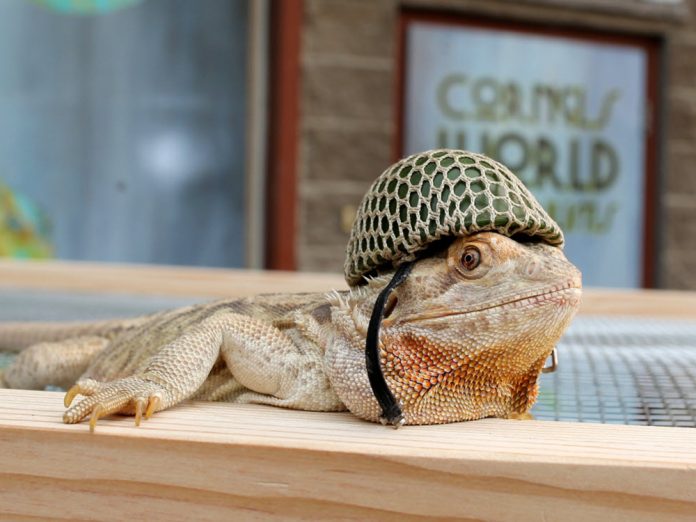 Bearded Dragon Kevin wears one of his signature hats at Cornel’s World Terrariums on Thursday August 23, 2018. Kevin and the staff of the Calgary business including owner Greg West and his daughter Emma are featured in an upcoming series on Animal Planet. Gavin Young/Postmedia

It started with his first reptile, an anole, when he was a kid. Then it snowballed into owning geckos, chameleons, frogs and bearded dragons. Now Greg West has a reptile terrarium business that’s about to make its international TV debut on Animal Planet.

The show is Scaled, and the team at Cornel’s World, a custom terrariums and woodworking business in Calgary, will be shown constructing big-scale reptile terrariums. They build terrariums like a giant Mayan temple, a post-apocalyptic nightmare and an Avatar blue dream-world.

“Once we have the animal’s needs in mind, then we design the terrarium around what it needs in terms of heating, lighting and humidity,” West says.

“I wasn’t actively looking for a TV show, so it was just coincidence,” says West, the owner of the business. “We’ve been filming since May and today is the final day of shooting season one.”

Eighteen years ago, Cornel’s World was a small business in West’s garage. He began by constructing fun terrariums for his own reptiles but thought he could make some extra cash by building homes for other people’s cold-blooded pets. It’s now a full-time business for West and his 10 employees.

In Alberta, the team has built reptile enclosures for the Calgary Zoo, Edmonton Valley Zoo and many local pet shops. He’s sent terrariums across North America, as far away as Florida.

Some terrariums can take months to complete, but on average they take two or three weeks.

“I would almost compare it to miniature zoo exhibits. We make a nice enclosure for the animal but we’re outfitting the interior, whether it’s themed or naturalistic, with water features, misting systems, heating, lighting, decor, (and) either live plants or fake plants depending on the animal,” said West.

The TV show Scaled will focus on West’s business, showing his team building large-scale, one-of-a-kind terrariums “to suit the animal’s needs, as well as meet the requirements for the customers.”

Significant attention will be given to educating the audience about proper reptile care because each kind of reptile needs specialized care.

“There’s a lot of different reptiles that are showcased in each episode and a part for learning about each animal as well,” said West.

His 12 year-old daughter Emma will play a large role in the educational portion of each episode. As she inquires about different reptiles, the shop’s employees will be explaining things to both her and the audience.

The show is set to premier Friday on the American Animal Planet channel and on Oct. 8 in Canada.