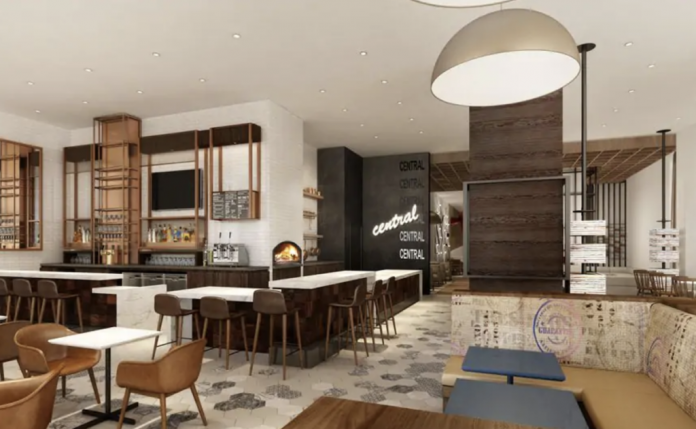 While the menu is still forthcoming, the restaurant to targeting a December debut.

The hotel is targeting a December 11 debut and the restaurant will open sometime thereafter.

The menu is forthcoming.

“We’re creating a fresh and local approach with food, something you don’t necessarily find often in hotels,” Messier said in the announcement.

A stone hearth oven, one of the main focal points behind the bar, will be used to create several seasonal dishes.

Much like the décor of the lifestyle hotel, the ornamentation at Xhibit Studio Kitchen and Bar will pay homage to local artists, creators, and artisans.

Along with a series of stacked canvases by Atlanta-based Emily Mann, the floor is lined with ornate tiles while oversized domed lighting hangs from the ceiling.

An “L”-shaped bar covered in white granite grazes the entrance to the kitchen, while a mix of booths and chairs make up the rest of the dining room.

“I want guests to walk into Xhibit and have their surroundings immediately spark conversation,” Vincent Bucci, the hotel’s general manager, said in the announcement.

“From the electric atmosphere and décor to the thoughtfully local menu, we want every moment in the experience to awaken the senses.”

The 3,350-square-foot restaurant space will also serve on-the-go items such as pastries and quiches, as well as coffees from Smyrna-based Rev Coffee during the day.

Patrons will have the option of in-house artisanal dining, while guests of the hotel can have breakfast delivered to their rooms.