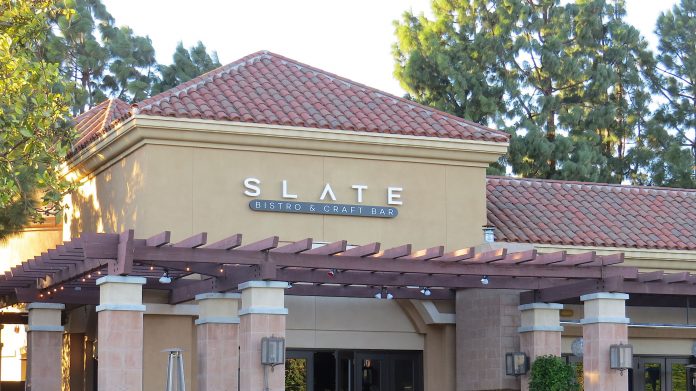 When his aptly named Slate Bistro & Craft Bar opened Dec. 2 at the old Safire American Bistro space in the Mission Oaks Plaza, patrons had to look hard for signs of the former restaurant. (I found one remnant in the parking lot, where a space marked “Ump 9” is a lingering shoutout to a Safire investor who worked as a major league umpire.)

“We left the pizza oven in place. Everything else we wanted to give a whole new look,” said Pillard.

Safire’s wood paneling and dark upholstery have been replaced by sofas, banquettes and booths upholstered in white pleather or teal velvet. Lucite chandeliers hang over the main dining room, where a newly erected wall covered in white geometric shapes serves as a divider between it and a more intimate space accessed by a ramp.

Purple uplighting abounds, a visual nod to Pillard’s love of Prince, whom he saw in concert nearly 40 times before the artist’s death in 2016.

Bar seating has been extended into what previously was a private wine-cellar dining space, giving lead mixologist Jeff Hamilton, formerly of Twenty 88 in Old Town Camarillo, plenty of room to serve signature drinks garnished with edible flowers, herb sprigs and ribbon-like slices of cucumber. Cocktails include No Southern Gentleman, a mix of bourbon, apricot agave and ancho chili liqueur served on the rock: a single oversized cube from West Coast Ice Provisions.

FROM THE ARCHIVES: Safire American Bistro closes suddenly in Camarillo (2017)

MORE: These 6 gifts for foodies will add Ventura County flavor to your holidays

U-shaped booths and Lucite chandeliers are part of the decor at Slate Bistro & Craft Bar, which opened Dec. 2 at the former home of Safire American Bistro in Camarillo. Currently open for dinner, the new restaurant will add lunch service next week. (Photo: PHOTO BY LISA MCKINNON/ THE STAR)

The once-open kitchen is now ringed by smoked-glass panels that allow diners to see in without subjecting them to its heat and noise.

Overseen by executive chef Abdu Romero with assists from sous chef Oscar Victoria and pastry chef Oscar Melendez, it focuses on dishes inspired by Romero’s family and his travels to more than a dozen countries. He trained in the kitchen of his grandfather’s bakery in Mexico and at Kitchen Academy in Los Angeles before working as a private chef in Malibu. Most recently, Romero was sous chef at the North Ranch Country Club in Thousand Oaks.

“I want people to have a good time, a great cocktail and food that will take them, even for just a moment, to the place that inspired it,” says executive chef Abdu Romero of his approach to the menu at the newly opened Slate Bistro & Craft Bar in Camarillo. (Photo: PHOTO BY LISA MCKINNON/ THE STAR)

At Slate, his starters include Yucatan chicken skewers ($12 for six) marinated in achiote paste and served with charred naranja agria (sour orange) atop a bed of bright-pink pickled onions and circles of lime-habanero crema.

Wild mushroom taquitos ($10) feature a mix of button, cremini and wood ear ’shrooms, served with a black bean puree made with vegetable stock to help keep the dish vegetarian-friendly. Take note: Short rib taquitos, $12, are accompanied by a separate black bean puree made with a touch of lard to echo the luxuriousness of the short ribs, Romero said.

Another entree is a take on a classic paillard, the dish Romero made each day as lunch for Robert Lopez, the French-born former owner of The Tower Club in Oxnard when Romero worked there with Pillard. The not-a-misprint Chicken Pillard ($22) features a pan-seared chicken breast marinated in a mix of chives, parsley, garlic and dijon, served with roasted garlic mash and roasted vegetables in a red wine-oregano vinaigrette.

“When I came here and started working with Vince again, I knew we had to do it,” Romero said with a smile.

Vince Pillard, owner of Slate Bistro & Craft Bar in Camarillo, takes a photo of cocktails for a social media post about the restaurant’s happy hour. (Photo: PHOTO BY LISA MCKINNON/ THE STAR)

Pillard served as membership and marketing director for The Tower Club before teaming with wife Annette Natella and other partners to open Twenty88 in 2011. After seeing the combination wine bar and restaurant through a 2013 expansion that included adding a full alcohol license, Pillard and Natella sold their interest in the business in 2017. Pillard remains a partner at BLVD BRGR, the order-at-the-counter Old Town Camarillo spot he opened with John Stewart in 2016.

“I like to take classics and give them a twist,” says Jeff Hamilton, lead mixologist at Slate Bistro & Craft Bar in Camarillo. Here, he prepares No Southern Gentleman, a mix of bourbon, apricot agave and ancho chili liqueur. (Photo: PHOTO BY LISA MCKINNON/ THE STAR)

Scheduled to launch Friday, happy hour from 4-6 p.m. will offer specially priced dishes and drinks. The latter include a Butterfly Collins, made with color-changing butterfly pea-flower tea, and a classic Penicillin, mixed with whisky, lemon juice, honey and ginger.

In Newbury Park, what closed at the end of October as Julie’s Alps is back in business as a German restaurant — albeit with new owners and a new name.

Edelweiss German Bierhaus debuted Dec. 4 under the guidance of the husband-and-wife team of Philip Powell Hernandez and Brandy Powell-Hernandez.

He’s the chef, overseeing a menu that includes soft-baked pretzels with mustard ($5-$9), house-made späetzle ($5), traditional bratwurst served with sauerkraut, kartoffelsalat and mustard ($15) and vegan options that range from lentil-vegetable soup ($6) to currywurst with fries, mixed greens and curry sauce ($16).

She’s the former general manager of Jeanette’s Edelweiss, which occupied the same address from March 2015 through early this year. The building still displays the “Jeanette’s Edelweiss” sign out front. Window stickers and a banner announce the business’ new name.

The decor remains largely unchanged, although there are plans to bring back the model train that was removed when Jeanette’s Edelweiss turned into Julie’s Alps. (The feature dates back to the location’s days as Lamppost Pizza.) Hours are from 11 a.m. to 9 p.m. Sundays through Thursdays, and 11 a.m. to 10 p.m. Fridays and Saturdays (2160 Newbury Road, Suite A, 805-768-5133, https://edelweiss-restaurant.com).

Rave Organics Cafe in Newbury Park “temporarily” closed, according to sign on the door. #restaurantspeakpic.twitter.com/9qYjYbeLS5

A handwritten sign seen on the door this week greets patrons with a message that reads “We are sorry for any inconvenience, but we are temporarily closing to assess flooding damage.” The restaurant’s Yelp page also states that the closure is temporary, with a reopening planned on Jan. 3.

The restaurant’s website was still live and inviting visitors to place online orders as of Friday afternoon.

But the Rave Organics’ Facebook and Instagram accounts disappeared sometime in early December (its Twitter account last posted on Nov. 18). On Monday, a call to the business’ phone number was answered by a blaring recording of holiday music. By Tuesday, the recording had been replaced by a message stating “the number you dialed is not in service at this time.” A private cellphone number that worked for one of the restaurant’s owners in April is also no longer in service.

The Ventura location of Rincon Brewery opened Dec. 7 at what used to be a Salvation Army Thrift Store near Ventura College. The working brewery, taproom and restaurant is a much-larger sister location to the original Rincon Brewery, which opened in Carpinteria in 2014.

But fans of the Vagabond Coffee Shop at 760 E. Thompson Blvd. had better get a move on. In an interview published in The Star last week, owner Jolene McBee said she is retiring and plans to close the 52-year-old restaurant after service on Jan. 1.

MORE: Vagabond Restaurant in Ventura to close its doors Jan. 1

The restaurant attached to the Vagabond Inn at 756 E. Thompson Blvd. will be remodeled and its equipment updated to meet current codes, according to a Vagabond spokesperson. It is slated to reopen at an unknown date.

To read the previously published story, click on https://bit.ly/2UrrrEh.

Lisa McKinnon is a staff writer for The Star. To contact her, send email to [email protected] To have the VCS Eats newsletter delivered directly to your inbox, visit http://bit.ly/VCS_Eats and type in your email address.