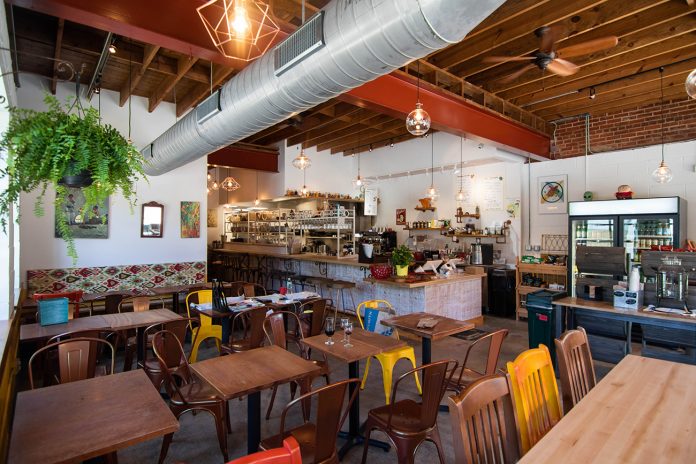 When Siggy Sollitto discovered a brick building that once served as a mini-mart but had been unoccupied for a couple of decades in Charlotte’s Belmont neighborhood, she knew she had found the perfect location for her cafe.

Beginning Sept. 4, Belmont’s newest eatery will serve Mediterranean-style organic salads and sandwiches, coffee and espresso drinks, soda, beer and wine. The restaurant will be open Tuesday-Sunday for lunch and dinner. Between Uptown and Plaza Midwood, the restaurant is located almost exactly between Birdsong Brewing Co. and Catawba Brewing Company at 1001 Belmont Avenue.

Kale, zucchini, or artichokes seared with garlic and olive oil, beets or garbanzo beans in extra virgin olive oil, beef kebobs, chicken strips or a tuna scoop are among side options.

All items can be made gluten free or vegan. The restaurant does not use butter, cream or meat stock in their cooking.

The restaurant’s interior is at once bright and inspiring, yet calming and cozy. Hanging ferns and flowers in pots decorate the white walls, which contrast with the concrete floor and exposed brick and beams.

“There are a lot of dark places in Charlotte, with dark wood,” Sollitto said. She said those places are nice and give off their own cozy vibes, but she wanted to bring in touches of white to her cafe. “It’s fresh, clean this way.”

Diners will order at the counter and servers will deliver their food. This half-service style keeps costs down, which Sollitto said will be passed onto the customer in the form of lower prices. Sollitto said the open kitchen will lend to the social, community vibe she is constructing. “You can share food. The cook serves you, everyone is involved.”

Indoor seating includes bar stools near the open kitchen and tables and chairs that can be maneuvered to accommodate small or large parties.

Outside, a yellow cafe table with chairs by the front door will allow patrons to greet neighbors walking down the street. A side patio features brightly colored tables and chairs with umbrellas and seating for about 20 people.

The Siggy’s sign out front is sure to be a conversation starter. Above the Siggy’s Good Food logo is an alien flashing a peace sign while eyeing a burger, with the words “aliens eat free” at the bottom. Sollitto once opened a health food store in New York, and her ex-husband, who is a cartoonist, offered to draw the original signage as long as she would allow it to be an alien with “aliens eat free” accompanying it.

Sollitto’s uncle had recently taught her about crop circles, and she said she thinks aliens are beautiful, so she was all in. And then, an unintended benefit: “People’s reactions to the sign were so amazing. People were looking up, smiling, making a joke,” she said. It lightened up everything. Children respond to it best — they love it.”

The sign has been re-designed since, but it still boasts an alien and it still promises free food for anyone who is one.

Sollitto is originally from Israel. After serving in the army there, she moved to New York City in 1993. She spent time traveling all over the world, and she was inspired by the way small businesses flourish in Europe, particularly in Barcelona.

Siggy’s was originally located in New York City, beginning with a spot in Brooklyn. When she opened a Manhattan location in NoHo, she said she realized the importance of neighborhood. People in Manhattan were more transient, and she missed the relationships she’d formed with customers in Brooklyn. Some of her early customers remain her closest friends.

In the meantime, Charlotte was starting to reveal itself to Sollitto, who has a sister who lives in Ballantyne. After visiting her frequently, she decided to put down roots in the Queen City. While searching for a new home, she discovered the walkable Belmont neighborhood, finding her perfect spot to live and work. “This is the little village I was looking for.”

She said she likes that the neighborhood is a former mill village with narrow streets, sidewalks and unique homes. “This is unlike many houses in suburbia, where there are no more front porches, not many sidewalks, and streets are wide, which act like a divider,” she said. “It’s the worst social divider of our time.”

When she moved to Charlotte, some people suggested she open Uptown, but she knew that wasn’t the right spot for her cafe — Sollitto wanted to be in a community.

Sollitto may not be able to create community spaces for every single neighborhood in Charlotte. But for now, she will offer up one: in Belmont, they will meet at Siggy’s.