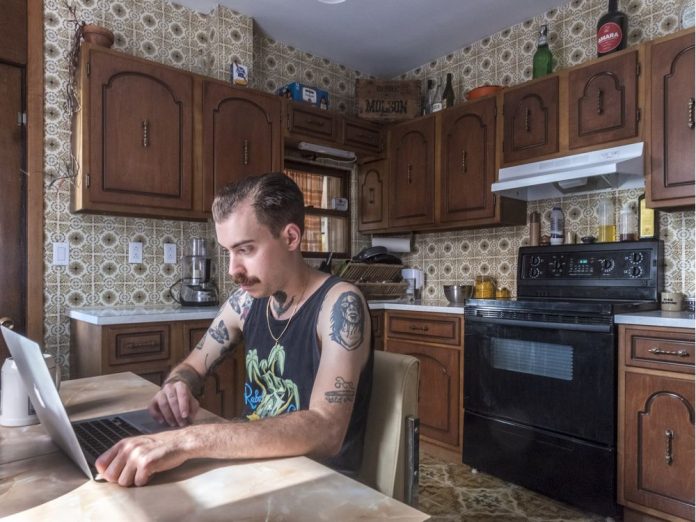 After almost a decade of globetrotting, Frederic Bigras is ready to stay put. The 28-year-old, who grew up in St-Lambert and Montreal, says that while travelling sounds romantic, he finally wearied of owning only a few things — especially cooking utensils. Bigras loves to entertain friends and he missed having a decent kitchen where he could prepare his favourite dishes.

Seeking a home base, however, was not the only reason for his return to Montreal. Bigras is an artist and he is pursuing a master of fine arts degree at Université du Québec à Montreal. Years earlier, he had dropped out of an art program at Concordia University. As he traveled to such places as Peru, Britain, China and the United States, he honed his artistic skills, building on the base he’d learned at CEGEP, where he specialized in the visual arts.

To keep “wallet and art together,” Bigras picked up jobs here and there, working in bars and restaurants, something he still does now that he’s back in Montreal — a typical scenario, in other words, for many young artists trying to make ends meet.

Just over a year ago, when Bigras returned to the city, he “lucked out” by finding an apartment in a triplex in St-Henri that had a retro-style kitchen with lots of cupboards and counter space. His home, which he shares with José Pino, a graphic artist from Honduras, has three bedrooms (one serves as Bigras’s workspace); a living room that is open to, but separate from, the kitchen; a large storage room next that houses a washer and dryer; a small balcony and a wood deck, which is a work in progress.

Q: You said you were really lucky to find this place because it was the first apartment you looked at after you came back?

A: Exactly! I was keen to live in St-Henri, because I’d lived in this neighbourhood before and some of my family, including my father, also live here. I found the apartment online and when I walked in, I took it on the spot! It had a unique vibe. Very Berlin-ish.

Q: You mentioned that the kitchen particularly attracted you?

A: It did. Not only because of the size but also the décor. I love the patterned ceramic flooring and the ceramic backsplash. It’s very 1960s. I also love the marble floor in the hallway. My father grew up in Italy, so maybe that’s why!

Q: Where did you get your kitchen table? That looks pretty retro.

A: Actually, it was my roommates’ brother’s wedding present. It was apparently stored in a garage for a long time, but José’s brother and his wife have moved on and the table doesn’t fit the style of their new condo. Something like that. I can’t remember the exact details.

Q: So you were given a few things for the apartment when you moved in?

A: Yes, but some of the things I found in the trash or bought myself, like the black fridge and stove. Although I like the retro décor, I didn’t want the kitchen to look like a time capsule. The glass-fronted display case in the living room was here and the elephant ornament on the floor came from my mom.

(We walk through a large storage room, out onto the terrasse. Large wood pallets are leaning against the outside wall.)

Q: What are those for?

A: As you can see, we’re still building the terrasse. We’re trying to use reclaimed wood as much as possible. The pallets came from neighbourhood bars — one from a bar down the street and another from a bar out front. We’re actually intending to have our own private bar and eating area here.

Q: Is that why you have that barbecue grill?

A: It’s a combined grill and smoker. I like to smoke my own meat.

(Back inside the apartment, Bigras points out some of the things he has accumulated — a vintage sofa with tapered legs and a stuffed moose head in the living room, and in his bedroom, a colourful shawl from Peru draped across a mirror that belonged to his grandmother, dozens of books and a map of Saskatchewan showing its size in comparison with countries like Kenya, Paraguay and Germany.

The piece de resistance is a bust of Elvis Presley, perched atop a glass display case in his home office. The display case is filled with figurines of soldiers.)

Q: Where on Earth did you find that bust?

(A discount store known for its quirky merchandise, Honest Ed’s was a city landmark for decades. It closed in 2016.)

Q: And the miniature army?

A: That’s a military game I play with my friends.

A: Well, I’ve tried to furnish it with at least one thing from each place I’ve travelled or lived.

Shelter is a weekly series featuring a conversation with tenants or condo owners.

Size: 1,000 square feet (plus a small balcony and a terrasse)