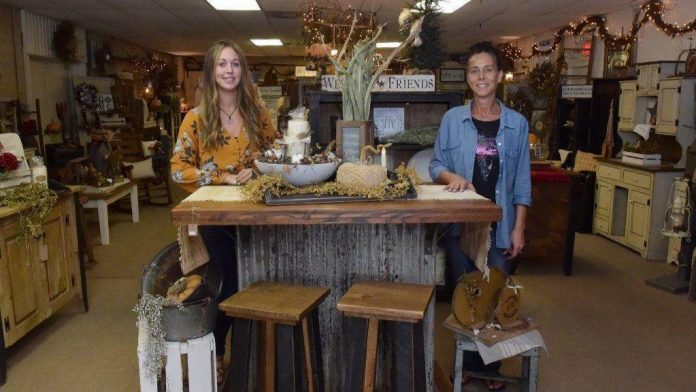 Whether you are looking for fall flair or preparing to deck the halls for the holidays, a new Whitehall Township store selling country decor, handcrafted furniture and more has you covered.

Applejack’s Country Store, which operated for 20 years on Elm Road in the Danielsville section of Lehigh Township, opened Aug. 17 in larger digs at 3572 W. Columbia St. (off Route 145, in front of Weis).

The family sources a majority of the wood regionally, including from old barns in Northampton County and Amish outposts in Lancaster County.

“We continue to grow because people aren’t looking for mass-produced items,” Andrejack said. “They are looking for unique, one-of-a-kind pieces.”

Furniture, which can be customized, ranges from bars, benches, coffee tables and headboards to armoires, blanket chests, end tables and trash holders.

“We make everything from start to finish,” employee Kacy Pavolko said. “Lisa’s husband and son build them and she and I do the finish work.”

The store, which takes its name from a nickname given to Lisa’s father-in-law, also sells other locally produced items such as carved wooden signs, hand-sewn pumpkins, soy candles, broom-corn, pillows and wreaths.

Christmas decor, including stuffed Santas, artificial trees, ornaments and more, should be arriving in the next few weeks.

Whitehall Township seems to be full of retail activity these days.

At the Lehigh Valley Mall, the Apple store is scheduled to open 10 a.m. Saturday in a larger outdoor shops space, which previously housed clothing chains J. Crew and Ann Taylor.

A tenant has not been announced for the Apple store’s previous spot a few doors down.

Also at the mall, Johnny’s Bagels & Deli is looking to open its fifth area location in mid-December in a lower-level space near Boscov’s, owner John Zohir said.

Customers will be able to order from an expansive menu that includes breakfast and deli sandwiches, burgers, wraps, paninis, subs and salads.

One last piece of mall news is the opening of a Stefano Versace Gelato kiosk a few months ago on the lower level near Starbucks.

The company, which has about a dozen other locations throughout the country, offers a wide variety of “made fresh daily” gelato, according to its website.

As I reported Monday, Zest bar+grille, a new restaurant from the creators of Grille 3501 in South Whitehall Township, will open in November on the rooftop floor of the new Gateway at Greenway Park building in Bethlehem’s South Side Arts District.

Owner John Trapani and executive chef/owner John Pukanecz have drawn upon their culinary and social experience to establish a restaurant defined by “great enthusiasm and energy,” according to a news release.

A “progressive menu that highlights the best of New American cuisine” will feature favorites from the 16-year-old Grille 3501 and new twists, while a beverage program will feature a robust beer selection, varietal-focused wine list and fresh takes on seasonal fruit-inspired cocktails. Info: zestbethlehem.com.

Also in south Bethlehem, The Colony Meadery plans to open a tasting room at 211 E. Third St., next to Patti’s Petals, in early 2019.

Co-founders Gregory Heller-LaBelle and Michael Manning, who debuted a tasting room at Allentown’s Bridgeworks Enterprise Center in 2014, closed on the Bethlehem building about a week ago, according to an announcement on the business’s Facebook page.

Several reasons factored into the expansion, including the owners’ desire to have a place where they could control offerings “from top to bottom,” according to the announcement.

The meadery, which produces its honey-based alcoholic beverages at 905 Harrison St. in Allentown, has operated a tasting room at the Moravian Book Shop on Main Street in Bethlehem since 2015.

On June 19, the meadery temporarily moved out of the book shop as it began renovations related to the store’s ownership change from the Moravian Church Northern Province to Moravian College.

Pending approval by the Pennsylvania Liquor Control Board, the meadery plans to resume business at the book shop by Monday, and continue operations there through the end of the year, the announcement reads. Info: colonymeadery.com.

Menu highlights will include quasadillas, create-your-own sandwiches and salads and “classic specialties” such as a BLT, chicken Caesar wrap and grilled cheese. There also will be a coffee, tea and homemade desserts.

I have a few developments to report in Allentown:

First, gallery 840 on Sept. 20 hosted a grand opening on the ground floor of the Butz Corporate Center at Ninth and Hamilton streets, next to Billy’s Downtown Diner.

Husband and wife operators Michael and Wendy Stoudt chose the location to expand the Center City’s Arts District a few blocks west, according to a news release.

Sandwich chain Subway has been “closed temporarily for change in ownership” for a few months at 811 Hamilton St. in downtown Allentown, according to a sign in the window.

Sandwich chain Subway has been “closed temporarily for change in ownership” for a few months at 811 Hamilton St. in downtown Allentown, according to a sign in the window. (RYAN KNELLER/THE MORNING CALL)

The gallery’s first installation, “Be Still,” featuring Wendy’s colorful and peaceful paintings, will be on display through Oct. 12.

Wendy is following her passion as an artist who takes joy in “painting God’s amazing creation and sharing her love of art with others,” the release says.

Also in downtown Allentown, sandwich chain Subway has been “closed temporarily for change in ownership” for a few months at 811 Hamilton St., near PPL Plaza, according to a sign in the window.

It’s unclear when diners can “eat fresh” again as another sign indicates the restaurant is “immediately available.”

One last piece of Allentown news: With Love Mary salon is expected to open within a few weeks at 1529 Hanover Ave., according to owner Mary Ott.

Ott and her husband bought the building that previously housed F5 Variety Store last October and have renovated the first and second floors.

The salon, featuring an industrial and modern feel, will offer haircuts, styling, waxing and make-up services, as well as hair care and styling classes.

I’ll finish with a few closures:

First, Tasty Garden Chinese restaurant abruptly closed a few weeks ago at 524 W. Broad St. in Bethlehem. The space is listed as available.

Second, Walnut Produce closed a few months ago at 307 South Best Ave., according to a post on the business’ Facebook page.

Lastly, Zerns Farmers Market’s last day of business is Saturday, according to a post on the business’ Facebook page. Hours will be 10 a.m. to 10 p.m.

The market, selling local produce, milk and other goods, opened in 1922 at 1110 E. Philadelphia Ave. in Douglass Township, Montgomery County.