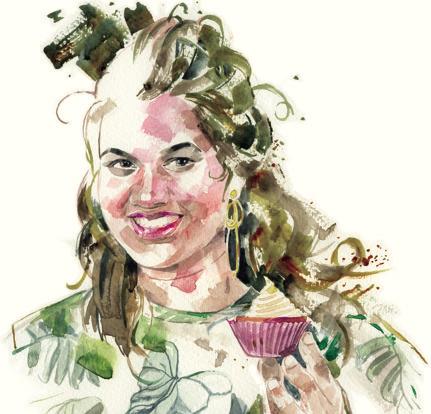 For the last few weeks, Pooja Dhingra has been attempting to stick to a new resolution—working just 12 hours a day. “Yesterday I came in at 7am and left by…” she pauses, breaking into a sheepish grin. “…9pm.” It’s evident that the founder of Le15 Patisserie, credited for leading the evolution of gourmet desserts in the country, is at home at work. We’re in the roomy 5,000 sq. ft space that Dhingra and team moved into this April, a significant upgrade from the modest commercial kitchen in Parel, Mumbai, from where she launched her business in 2010, with a team of three. Le15’s new headquarters in central Mumbai houses around 100 employees, most under the age of 24, and it is also where Dhingra steals moments for herself in the middle of lengthy seven-day workweeks. “I agree with Amazon’s Jeff Bezos who dislikes the term work-life balance,” says Dhingra, dressed in a light denim shirt, her hair pulled back with a knotted hairband. “He calls it work-life harmony—when you’re content with one thing, it feeds off the other.”

Dhingra’s cabin, which manages to be both laid-back and businesslike, is a multi-purpose space that hosts business meetings, private drawing lessons, dessert binges with friends and recording sessions for her podcast NoSugarCoat. On one side of her desk, a wall-mounted monitor delivers a multi-channel feed of in-house activity. On the other end lies a cosy single bed framed with wooden storage cabinets and a pastel-pink mural of Mt Fuji. This isn’t just as an aesthetically pleasing décor addition; it’s a business target.

For the 32-year-old pastry-chef-turned entrepreneur, the mural serves as a reminder of her goal for 2020: climb Japan’s highest mountain. “I was reading Shoe Dog: A Memoir By The Creator Of Nike by Phil Knight, in which he talks about how, in Japanese culture, climbing Fuji is a spiritual experience and you do it to celebrate an achievement,” she says. “So I sent an email to four members in my team, saying if we grow our business to this number by 2020, we’re climbing Mt Fuji… I’m taking them with me to do this crazy thing,” she laughs.

This somewhat fanciful goal falls in line with the Le15 story. At the age of 21, Dhingra dropped out of law school after two weeks of classes and drafted a dreamy-eyed life plan: attend culinary school in Paris, open a stand-alone patisserie back in India, expand into a nationwide chain (an ambitious task for a time when gourmet desserts were almost non-existent). Eight years later, after breaking even within 10 months of launching Le15, adding three outlets in Mumbai with two more opening in the next few months, and earning high brand recall in the gourmet dessert business, Dhingra is nearing the end of her checklist. Her bright-hued macaron boxes have turned into dependable gifting options, featuring all-season favourites like passion fruit, Nutella seasalt and French vanilla alongside offbeat options like rose, paan and pistachio. Requests for customized wedding desserts, such as macarons with henna designs and cupcakes matching bridal colours, have also increased.

Every week I focus on three main aspects of the business. And each day is spent breaking these tasks down further.–

And now, the nationwide expansion plan has begun to take shape. Le15 is now setting foot in other parts of the country via a newly launched macaron delivery service that supplies single-flavoured and customized boxes to 10 cities, including Delhi, Surat, Jaipur and Bengaluru, in 24 hours. Dhingra says the Paris-based patisserie Ladurée, which ships its confectionary worldwide, inspired the idea. “I thought if they can manage Paris to New York, why can’t we do Bombay to Delhi? I really believe in the direct-to-customer model because it makes sense financially. We have no overheads—you’re not paying rent or employee salaries in these cities. Macarons also have a long shelf life and are easy to transport.”

The response to this new e-commerce venture, Dhingra says, has been overwhelming, and has also inspired her to plan Christmas pop-ups to increase Le15’s presence in other cities. “Surat has been exceptional for us. I was a bit apprehensive because macarons have egg in them, so I thought Gujarat won’t perform as well,” she says. “And now we have so many messages saying why are you not delivering to my city? We’re trying to add more pin codes as we go in.”

That the French dessert finds demand in cities like Surat and Jaipur today is a comforting development for Dhingra. Especially, since the decision to centre her business on macarons, an unfamiliar dessert in India, was a risky one. Dhingra first tasted the light, colourful meringue-filled dessert at a Pierre Hermé patisserie on 15th arrondissement in Paris. This neighbourhood, where she lived while studying at Le Cordon Bleu, also inspired the name Le15. Dhingra knew instantly that she would recreate the French dessert back home, but doing that in Mumbai’s humidity meant powering through hundreds of failed batches. “It’s super difficult to make macarons here, which is why not many people do it even now. You have a temperature control room and there’s an entire drying process involved. It took me some time to get the recipe right,” she says.

In the initial years of setting up Le15, Dhingra prioritized work over birthdays dinners and anniversary parties, occasionally losing relationships and friendships along the way. The unsavoury bits of a good-looking pastry business is something she highlights on NoSugarCoat, which also features buddies from the culinary world, including chefs Garima Arora, Kelvin Cheung and Prateek Sadhu. “I’m a very different boss and owner than when I was 23,” admits Dhingra. “When I started I was young, ambitious, angry, yelling a lot. But over the years you learn patience, and that things will fall into place when they have to,” she says.

A new milestone Dhingra achieved last month was becoming the first Indian food influencer to cross one million followers on Instagram. What’s more surprising, she says, is that over the years, the platform has also proved to be a dependable HR recruiter. “A lot of my hires have happened over Instagram, including my assistant who messaged me saying she would like to work with me for a month, and if I like her job, I can hire her. I hired her in two weeks.”

This assistant, Mrinal Naik, a former computer engineer who says she now spends her time happily engineering “everything but computers”, plans Dhingra’s days with razor-sharp focus to maximize productivity. “Every week I focus on three main aspects of the business,” explains Dhingra. “And each day is spent breaking these tasks down further. The system that we have now is that every minute is accounted for—before every meeting I’m supposed to get an agenda on why someone wants to see me so I’m prepared and I don’t waste time with questions.” This focus on understanding and improving efficiency extends to the entire Le15 team. Weekly “Learn15” workshops are organized for all employees to help them identify their individual working styles, and play on strengths. “Everyone has their own goals and they build their own road maps—we check in every now and then to see how they’re doing. At the end of the day, it’s about empowering them to reach their goals, and that’s linked to the company’s goals,” says Dhingra.

And while Dhingra is glad to have paved the way for younger pastry chefs in the business, she finds many new entrants are surprised to discover its biggest challenge, which isn’t the long hours, the high-stress environment or the upsetting baking disasters—it’s the monotony. “A lot of them say hey, I can bake a really good cake,” she explains, “But that’s taken for granted. Can you make a 100 of them? Make them as well, every single day, for the rest of your life? It’s not like MasterChef with a new challenge every day.”

A personal challenge that Dhingra has been facing for the last few months is managing tastings for a new pastry cookbook while on a no-sugar cleanse. “As disgusting as it sounds, it was like wine tasting—eat and spit,” she says. I Can’t Believe It’s Eggless, which Dhingra will self-publish next January, features more than 100 eggless recipes, from cookies and brownies to indulgent cakes, an idea the young chef found unpalatable at the start of her career. Now, she sees it as an exciting creative challenge, and an opportunity to cater to a new market. The Le15 menu has also taken a healthier turn after conscious eaters, and Dhingra herself, began eliminating processed sugar from their diet. “When you’re around desserts all the time it’s easy to go out of control. The first few weeks I had serious withdrawal. But now we’re also making healthy, keto-friendly desserts, which come in part from my own need for something sweet and not having options.”

As we step outside the cabin for a tour of the winding central kitchen, Dhingra makes quick stops to check in on a fresh batch of biscotti and get updates from her staff. Many of the pastel-pink walls in the space are adorned with motivational quotes, and it makes one curious: about the grand plan after Mt Fuji. Dhingra responds with a warm, confident laugh. “I always laugh when anyone asks me that because my answer is always—world domination!”

The Andamans. I’m going on a diving trip with my friends next year.

Most ambitious project you have undertaken

I actually haven’t taken it on yet, but next year I want to open a baking school and placement centre for underprivileged women.

I love all food accounts. Because I’m intermittent fasting right now, I can’t eat till 11am, I just look at pictures of food every morning and send them to Pablo (Naranjo Agular, culinary chef at Le15).

Your next cookbook will be dedicated to