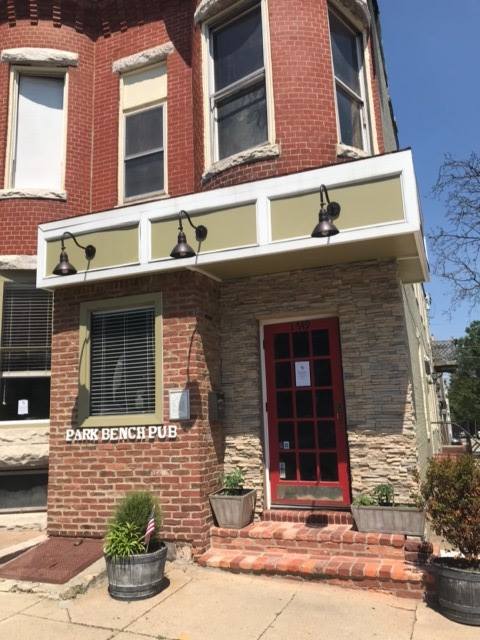 Puzio told SouthBMore.com that he has been in the restaurant business his entire life, including working in the kitchen at Woodberry Kitchen before helping open Mother’s Peninsula Grille in Arnold. He said he wasn’t aggressively looking for a location for his own restaurant and wanted to wait for the right opportunity. “It (Park Bench) sort of presented itself as the perfect spot – small, manageable, and with a neighborhood feel,” said Puzio.

Park Bench Pub seats about 45 guests between its bar and table seating that spans the first floor of two Riverside rowhomes. Puzio did some small renovations to the space including new paint and “sprucing up” the kitchen. He also added more decor to the walls with a lot of images of park benches from different neighborhoods.

Puzio is also changing the menu to have a new focus on “hearty” sandwiches that will include slow-cooked corned beef and griddled Trenton pork roll with fried eggs to honor Puzio’s New Jersey roots. Puzio will also be rotating in other roasted meats to the sandwich lineup. The menu also now features a turkey burger with sliced pear, goat cheese, and basil aioli.

Puzio is keeping popular items such as the Avo-N-Bleu and the PBP Max burgers, Rich’s Famous Wings, Riverside Disco Taters, nachos, and flatbreads.

New salads include Caprese salad, classic caesar salad, the Pub House salad with grilled chicken, and the Sweet Nutty Goat salad which is a mix of fresh field greens tossed with a raspberry vinaigrette topped with sliced pears, walnuts, tomatoes, and goat cheese.

Park Bench Pub has eight draft beer lines that will have rotating beers from local breweries. It will also serve can beers including the UNION Craft Brewing portfolio. Cocktails will include three to six specialty drinks including a Watermelon Crush and a Cucumber Cooler. Park Bench Pub will sell house wines as well as higher-end options. Puzio plans to expand the wine selection in the future.

Park Bench Pub will run weekly specials including a wings and Natty Boh night on Tuesdays, Bingo and $6 flatbreads on Wednesday, and half price burgers on on Thursdays.

Park Bench Pub is now open Tuesday to Saturday from 5pm to midnight and Sunday from 4pm to 9pm. It will open on Sundays at 12pm once the NFL regular season gets underway.

Happy Hour is every night from 5pm to 7pm with $5 drafts and wines with appetizers specials.

Park Bench Pub has a small staff of four bartenders and a cook who works with Puzio in the kitchen. Puzio’s wife Janice Shih also assists.

Puzio said that Park Bench Pub will focus on being a neighborhood spot and hopes to form partnerships with sports teams and leagues at Riverside Park, which is a block from the restaurant. He said he inherited a core clientele from the neighborhood.

Park Bench Pub will also be family-friendly. Puzio noted that he loves how many grade school-aged kids are in the neighborhood and how the community has boosted Thomas Johnson Elementary Middle School.

Puzio is also excited about joining in the business community in the Fort Ave. corridor. “I’m thrilled about being in this part of the neighborhood,” he said. “All the other restaurant owners are so friendly with each other and so helpful.” About the Author: Kevin Lynch

Creator of SouthBmore.com and resident of SoBo. Graduate of Towson University and owner of Incept Multimedia, a full service video production company. Diehard Ravens and O’s fan, beach volleyball enthusiast, dog lover and “bar food” foodie. Email me at [email protected] and follow me on Twitter at @SoBoKevin.