Home Home decor Kitchen #MKR: The heat is on for engaged couple 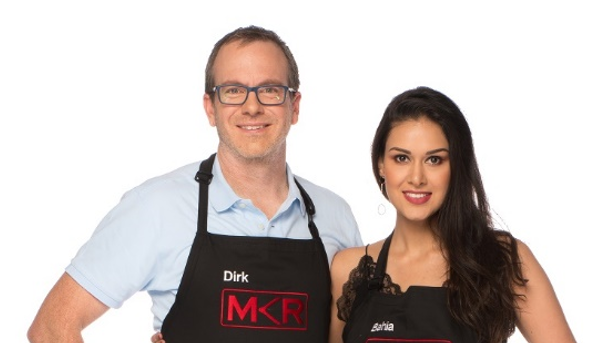 My Kitchen Rules is still heating up the kitchen with its second Instant Restaurant phase.

In tonight’s episode, table two is in
for Dirk and ’s Instant Restaurant, after which the team with the lowest score will be eliminated.

Judging from social media, this pair is not a fan favourite.

In last weeks show Parkview moms Maj and Joleen both 43-years of age raised the bar in MKR SA with their Instant Restaurant, aptly named “the Cooksisters.”

They posted a total of 72 points out of 100- overtaking married couple Maritsa and Maradine by two points and relegating them to second place on the MKR leaderboard.

Marj is originally from
but has lived in
for 20 years. She is the owner of home décor stores ‘Room – Decorate your Life’ in Blubird Centre and Greenside and also consults on interior design.

Joleen is Afrikaans and from
with her professional career playing out in the fast paced digital innovation space.

Larsen says her daughter, Sophie suggested they enter MKR and they both thought it would be a fun adventure.

“We have had an amazing MKR journey so far and have met some wonderful people who have become friends. We’ve learned so much and have become much closer as friends” she says.

These two are rela foodies – both started cooking from a young age with their moms.

They both love unpretentious home cooking where the flavour and quality of the ingredients are allowed to shine.

Recapping on their menu, the pair served a beautiful starter that was well received by the judges.

But Dirk and weren’t too impressed, commenting that they weren’t happy with the flavours, and Donald was disappointed to find a closed mussel in his portion.

For the main course, the pair served slow-roasted duck with fondant potatoes and rodkal.

Overall, the feedback was positive.