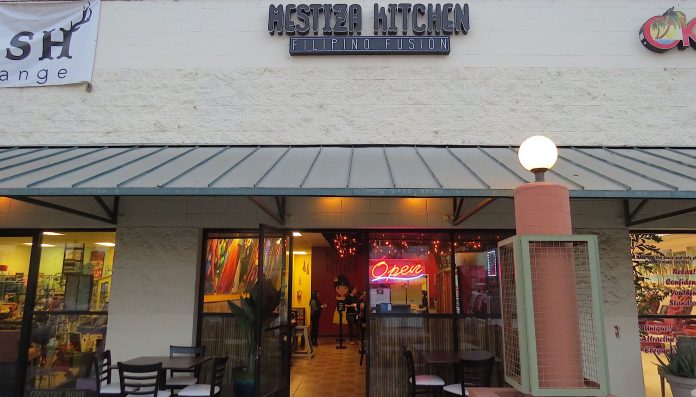 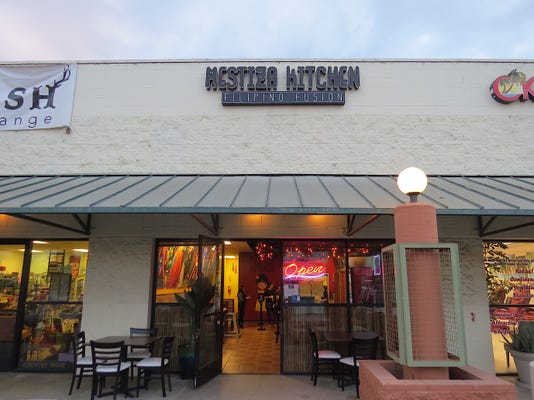 Step up to the order counter at Mestiza Kitchen in Ventura, and one of the first things you’ll see is a question painted on the wall: “Gutom ka na?”

Leia Afable grew up hearing the Tagalog phrase for “Are you hungry?” from her mother, and, during visits to the Philippines, from her grandmother.

“Even when we just ate an hour ago, my grandmother would ask us,” Afable said with a laugh. “My mom, same thing with me and my brother. And if friends came over, they got asked, too.”

When the family-owned Filipino-fusion restaurant marks its grand opening from noon to 8 p.m. Saturday and Sunday in the Gateway Village shopping center, Afable, brother AJ Clevenger and parents Beth and Corky Clevenger hope to give customers plenty of ways to answer the question posed by the mural. 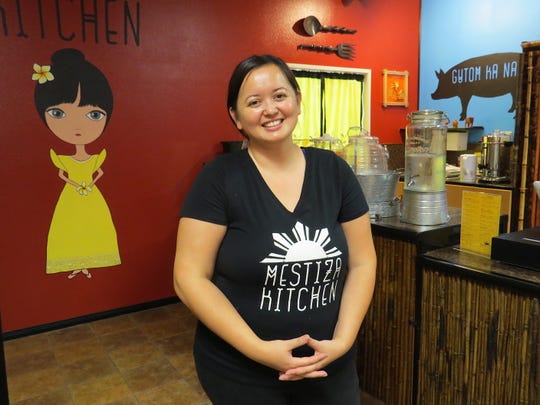 “I wanted to bring that Filipino foodie vibe here to Ventura County,” says Leia Afable, who launched Mestiza Kitchen as a catering company in Nashville. The Hueneme High School graduate teamed with family members to open the Ventura restaurant, which will debut on Oct. 6. (Photo: PHOTO BY LISA MCKINNON/ THE STAR)

The menu features Beth’s traditional recipe for lumpia, filled with ground turkey, pork and vegetables (four for $5), as well as siopao (a steamed bun filled with meat, $3), baked chicken wings tossed in a soy, cane vinegar, garlic and ginger sauce (six pieces for $9), and chicken adobo in non-traditional presentations that include sliders ($5) and nachos with calamansi crema on top ($7).

The tiny calamansi is available as a juice ($3.50); it also flavors the macerated raspberries that top Afable’s matcha cheesecake, prepared with an Oreo crust and a drizzle of white chocolate ($3.50). Other desserts include a cake made from grated cassava root and coconut milk ($2.75), ube cupcakes with ube buttercream ($2.25 each) and puto flan, a steamed rice-flour cake topped with flan ($2).

The mix of culinary influences echoes the inspiration for the restaurant’s name. According to its website, “the word ‘mestiza’ or ‘mestizo’ in the Philippine culture means someone of mixed native and foreign descent. It is actually a Spanish word, coming from the Spanish colonization of the Philippines.” 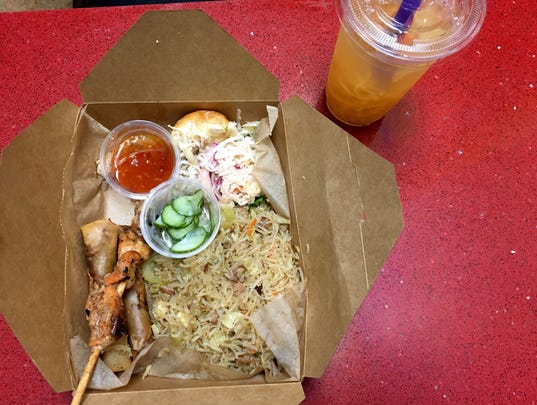 For Afable, the name is personal. Her parents met while her father, who is American, was on a church mission in the Philippines in the 1970s. “That’s where he learned to make the noodles we’re serving. It’s a typical Filipino noodle dish, but he does his own thing with it,” said Afable. The menu lists the dish as Imperial Noodles ($5), described as “our version of pancit bihon: stir-fried rice noodles with sausage and veggies.”

Mestiza Kitchen was started as a catering company in Nashville, where Afable — a Ventura County native who graduated from Hueneme High School in 2003 — had been living with husband Jason Afable since 2013. (She now divides her time between Ventura and Nashville, where Jason, a songwriter, producer and multi-instrumentalist, has a publishing deal.)

When Afable’s father retired and her parents started talking about wanting to open a restaurant, she tried to get them to join her in Nashville. They countered with, “Why not open a place in Ventura County?” 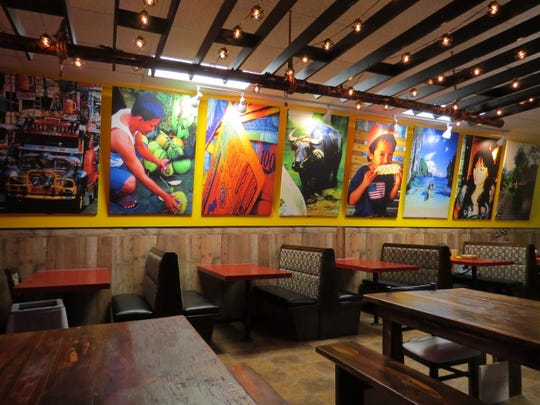 Decor at Mestiza Kitchen in Ventura includes a display of photos taken in the Philippines by co-owners Leia Afable and her father, Corky Clevenger. (Photo: PHOTO BY LISA MCKINNON/ THE STAR)

“I love foodie-type Filipino stuff, like you see at B Sweet, Cafe 86, FrankieLucy Bakeshop and all these cool little place in Los Angeles,” Afable said. “There’s such a huge Filipino population here, and people who know Filipino food, that I wanted to bring that Filipino foodie vibe here to Ventura County.”

In Fillmore, the first Ventura County location in the SONIC Drive-In chain is slated to open in summer 2019, according to Johnny Jones, its vice president of development and construction. The restaurant known for its drive-thru service model and specialty drinks (hello, Pickle Juice Slush) will be at what is now a vacant lot at 643 W. Ventura St., also known as Highway 126. Inspire Brands, the parent company of Arby’s and Buffalo Wild Wings, last month announced plans to buy the Oklahoma-based SONIC chain for $2.3 billion (https://www.sonicdrivein.com).

In Moorpark, the newest version of Carrara Pastries will mark its grand opening from 8 a.m. to 10 p.m. Saturday. The celebration will include samples, a photo booth and a cookbook-signing appearance by co-owner turned Food Network and “Bake Off Italia” star Damiano Carrara.

Carrara and brother Massimiliano Carrara opened their first Moorpark location in 2012, then expanded it into a neighboring space about a year later. The new address, located in a portion of the former Fresh & Easy Neighborhood Market in the Tuscany Square shopping center, offers more parking, patio seating and plenty of room for cooking classes and other events. Its menu will continue to include soups, salads, sandwiches and made-in-house pastries and gelatos (144 W. Los Angeles Ave., Unit 107).

FROM THE ARCHIVES: Carrara brothers are living la dolce vita thanks to Italian pastries (2017)

In Santa Paula, what closed in November as Tia Babe’s Restaurante has been claimed as the future home of Hampton Ranch Restaurant, according to a newly installed sign on the building at 125 S. 10th St. Attempts to ferret out additional information were not successful before the deadline for this column.

In Simi Valley, the county’s fourth Burgerim opened Sept. 22 in the Centre Court shopping center (1390-2 Madera Road, Suite P1-2, 805-842-2898). Franchisee-owned sites in the miniature-burger chain can also be found in Camarillo, Newbury Park and downtown Ventura. Additional locations are under construction in Oxnard, Thousand Oaks and the food court at the Pacific View shopping center in Ventura (https://www.burgerim.com).

Elsewhere in Ventura, the weekends-only restaurant dubbed BBQ & Brews at Orozco’s de Ventura, 839 E. Front St., has ended its all-too-brief run after the death of a family member.

Launched in early July, the barbecue-centric spot known for its Saturdays-and-Sundays-only service of burgers, tri-tip sandwiches and 16-ounce ribeyes (with beer, wine or soft drinks) took a break at the start of the Labor Day weekend, when “closed … due to a family emergency” signs appeared on the windows and front door.

So long, BBQ & Brews at Orozco’s in Ventura. You closed before I could sample your weekends-only goodness. #NotTemporarypic.twitter.com/z0LfJ1ap3x

Its status was updated in a Sept. 19 Facebook post signed by the Torres family. It reads, in part: “Due to the recent passing of my dad (and my brother last year) we have made the decision to close up shop for a while. … Who knows we may turn up again sooner than later, but for now our family is our number 1 priority.”

Orozco’s opened in May 2017 as a Mexican restaurant operated by Guillermo Orozco. In the aftermath of the Thomas Fire in early December, it switched to “temporary restructuring” hours that were limited to weeknight dinners and all-day service on Saturdays and Sundays. According to California Department of Alcoholic Beverage Control documents, Orozco applied for a full-bar license for the restaurant in early August. The application is still listed as pending, although the space does not appear to be in business as any restaurant. The “BBQ & Brews at Orozco’s will be closed … Sept. 1st and 2nd“ signs remain in place and the phone number used by both the barbecue restaurant and Orozco’s no longer receives calls.

Lisa McKinnon is a staff writer for The Star. To contact her, send email to [email protected] To have the VCS Eats newsletter delivered directly to your inbox, visit http://bit.ly/VCS_Eats and type in your email address.