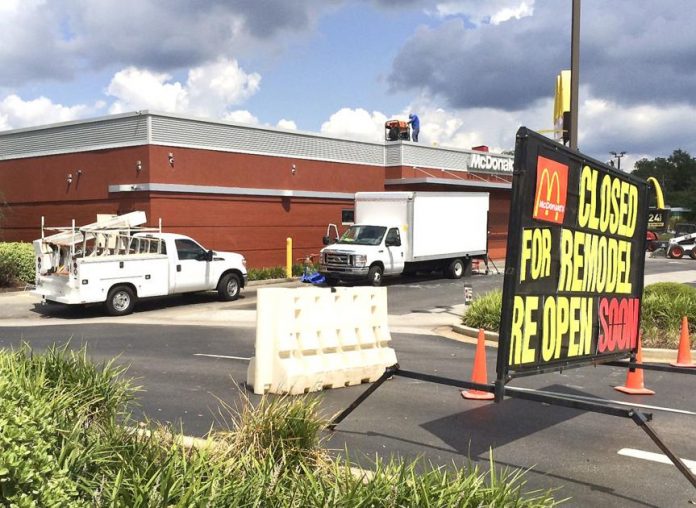 The McDonald’s on John C. Calhoun Drive/U.S. 301) has closed so that major renovations can be made to the fast food restaurant.

The eatery is being renovated as part of an effort by the national restaurant chain to modernize its locations across the country. Georgia-based Davie’s Construction Company is handling the remodeling.

The restaurant will reopen in early October.

“We are gutting the building, and when we finish, it will be like a brand new store,” said Emory Main, who owns Orangeburg’s three McDonald’s locations with his wife, Lisa.

“It is a cleaner, more modern look. I think everybody is going to love it,” he said.

The restaurant closed entirely on Sept. 4 after operating via its lobby and drive-thru for about a month as the work was getting underway.

The John C. Calhoun Drive McDonald’s will have new finishes, fixtures and decor as well as a different kitchen and dining room arrangement, Main said. The restaurant will have a side dining room, a front dining room and a new beverage and dessert hall, he said.

In addition, the McDonald’s will feature a self-ordering kiosk in the lobby, where customers will be able to order their food at their own pace and have the meal delivered to them at their table.

The restaurant will also have a new kitchen touted by McDonald’s as the ‘kitchen of the future, with a restyled prep line for improved food preparation.”

“It is a whole new prep line which saves steps and increases the efficiency of people working the grill,” Main said.

The new kitchen design is featured in about a dozen McDonald’s locations in the region and about 50 nationwide.

The Mains had their Chestnut Street McDonald’s next to Prince of Orange Mall torn down in January to make way for a new $3 million restaurant on the same property.

At the time of its opening in May, the Orangeburg Chestnut Street location was only the second store – the other being in Orlando, Florida – with the new decor.

Main said the reason the Chestnut Street store was completely torn down but the John C. Calhoun store was not was because of the structure and the size of the building.

The Chestnut Street McDonald’s was much smaller, making it more conducive to demolition, he said.

Overall, Main said McDonald’s is spending more than $105 million on renovations to its stores in the Carolinas. McDonald’s is helping to pay for about 25 percent of the cost, he said.

The Mains also own the McDonald’s on U.S. 601 off Interstate 26. That restaurant is also expected to be remodeled in January 2019.