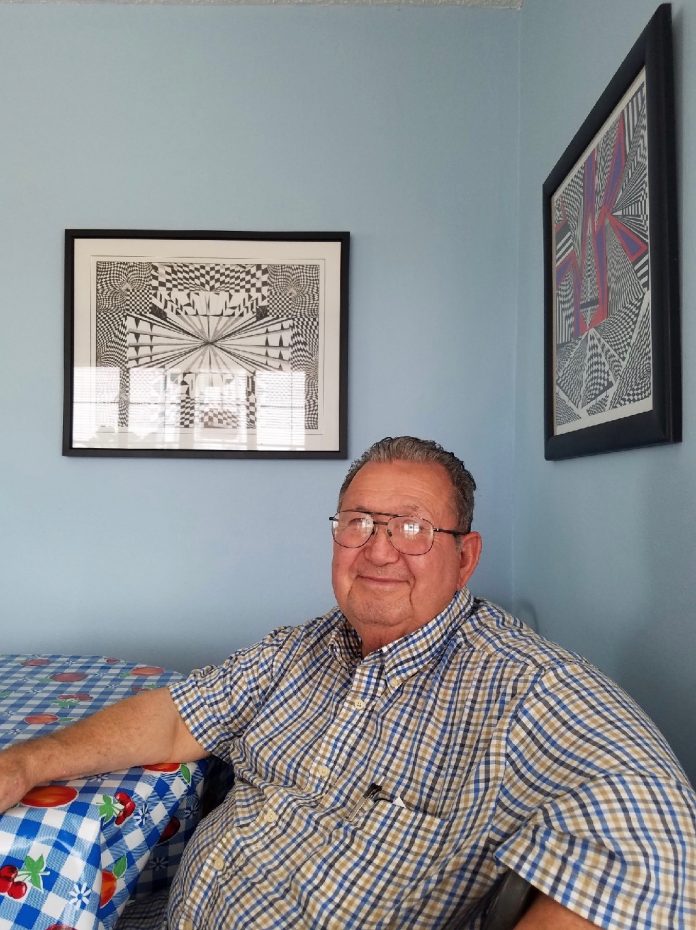 Formerly the longtime director of Chapel of Light Church’s Manna Kitchen in New Boston, Sladovnik is also attuned to another art, the art of cooking. Manna assists senior citizens and disabled citizens who are in need of food, so Sladovnik is well-versed in seeing the impact a good meal can make.

Gallery: Art of the kitchen

Now, after a few personally challenging years, Sladovnik is putting the experience he gained at Manna Kitchen to use at a place where he can practice the art of cooking—and even employ his own art as decor in the dining room.

Sladovnik is bringing some of that home-style cooking back to the table here, pairing Southern fare such as country fried steak, fried pork chops and chicken and dumplings with German fare. After all, one of his cooks is German, so they’re going to go with what the cook knows. For Pioneer Days this past week, they prepared German schnitzel sandwiches.

If a diner sits down at the blue checkerboard tablecloth to enjoy this food for breakfast or lunch, the two meals served here, chances are the walls beside said visitor will feature Sladovnik’s art, often Sharpie ink drawings that show a crafty attention to detail and the gift of patience.

The food shows the same tender care and appreciation, judging by the healthy crowd that shows up for lemon pepper chicken, chicken spaghetti and blueberry cobbler.

“We do, too. We try to keep it similar to hers. We’ve got a little German twist. We’ve got a German cook,” Sladovnik said. He’s never sure what she’ll cook for the German special, but they note it’s being served on the menu board. He says their pork chops are cooked the way it’s done in Germany. You might find geschnetzeltes on the menu. Or you might find chorizo breakfast tacos.

“Actually I’m half Czech, half Irish. I’m hoping to where I can make kolaches, the fruit kolaches, as one of the desserts,” Sladovnik said. He plans to work that in after getting more established.

For more than 17 years, Sladovnik ran the Manna Kitchen, which his church started in the mid-’90s. “We’re feeding around 60 people now,” he explained. He wishes they could feed more. He enjoyed buying supplies at the food bank for 19 cents per pound: bread, rolls, vegetables, meats.

The people served by Manna can’t cook for themselves, he said, recalling one woman who was blind (and easy to please with a meal) or a man who had experienced a stroke but refused to live in a nursing home. Because of their misfortunes, they appreciated a meal arriving at their doorsteps.

“We fed one lady that only had one arm and she said, ‘I appreciate your potato dishes. Did you ever try to peel a potato one-handed?'” Sladovnik said. “I bet that would be hard.”

He always told himself that if he didn’t have the Manna Kitchen, he might try to run his own restaurant, and now he is. His first job was actually in food service, working at a cafeteria-style “smorgasbord,” as he described it, with a 40-foot table stuffed with every food imaginable.

“I made 50 cents an hour and worked anywhere from 18 to 19 hours a day. No breaks. You just grabbed a bite on the run,” said Sladovnik, born and raised in Fort Worth. His late wife moved from this area to Fort Worth, where they met. Eventually they decided to move back here.

As Sladovnik reminisces about his time with Manna, all around him his art serves as a backdrop. It’s almost like a museum exhibit. He appreciates being different with art that seems to sometimes have an optical illusion to it. His work is intricate.

“I like to do stuff that maybe no one else has done,” Sladovnik said. He’s always made art, but while raising his children, he put it aside. For the past 15 years or so, he’s been more active again, exhibiting in venues like Texas A&M University-Texarkana and participating in the Four States Regional Art Club.

Here at Ronnie’s Southern Kitchen, diners will meet Slodovnik’s granddaughter Rebecca ringing orders and helping in the kitchen. His son and grandson helped with painting and drywall work before they opened toward the end of June. Ronnie himself works early, when he can, doing those potatoes from around 4:30 a.m. onward.

“Because that’s time consuming and I can sit down and do that,” Slodovnik said, adding, “It’s just a lot of work to do and a short time to do it.”

What does he like to cook for folks? Fish dishes, for one thing. Cajun dishes, too. “I’ve come up with a baked catfish that’s really good,” he said. Look for him to introduce it to the menu. Getting busy in the kitchen is what he enjoys doing, but he’s still physically recovering from the exhaustion he’s felt from getting the restaurant ready.

“For me to be able to be able to be here is a miracle, really, from what I went through,” Sladovnik said. In 2013, he suffered a broken neck and other serious injuries in a horrific car accident on I-30. Two people died in the accident, but he lived. He was cut badly, too.

“The doctor quit counting at 100 stitches,” Sladovnik recalled, quick to note you can just barely see the scar. He broke his hand, too. “The hardest thing to do was learning how to use a can opener again,” he said. But he’s done

it. He’s made it work. While recuperating, he switched over to his left hand to draw, too, and the result was even better than with the right hand. It was a self-portrait that he drew.

When his wife passed away this past December, he was further inspired to pursue that idea of starting his own restaurant. He needed to stay busy, he says. They’d been married 57 years. His youngest son died about four years ago, too.

“The more I sit around at home, the harder it was to get out and do stuff,” Sladovnik said.

He knows how to work through challenges, after all. About three years ago, he decided he’d like to garden. Physically, though, it was going to be tough. He couldn’t really bend over. He’d work five minutes at a time, then rest, then work five minutes, and gradually became able to work longer and longer before a break.

Ronnie couldn’t really stoop over very well to do the weeding, either. No worries. He bought a box on which he could recline to weed on his side. “It didn’t hurt me that way, so that’s the way I did it,” he said.

Sladovnik has persevered through much in his life, but he’s now found space where he can realize a longtime dream. When Shirley decided to sell, he said, she talked with him.

“I’ve always liked to cook, and always in the back of my mind I thought someday I might like to have a restaurant. But then there was always other things to do,” Sladovnik said.

Now he has time to do something that makes him happy, and he’s open for business, breakfast and lunch, ready to fix folks those chicken fried steaks.