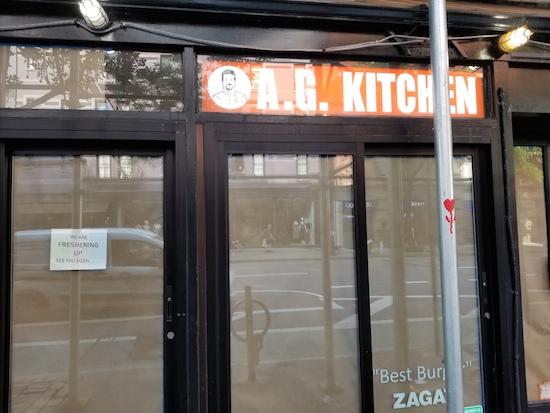 AG Kitchen, a Latin restaurant that was a mainstay on Columbus between 72nd and 73rd streets for six years, has closed. It will reopen “with a brand new concept” in a few weeks, the restaurant said on Facebook. Tipster Billy tells us employees said it will be a seafood spot, possibly with the name Upper West Seafood. The restaurant had a picture of a fish in its going-away message, so it sounds like seafood could indeed be the hook. Thanks to Ian, Billy and the anonymous eater for tips. The Fat Monk at 949 Columbus Avenue near 107th Street, a gastropub known for its meaty dishes like the duck burger, has also closed. It opened early in 2017 and even got a positive review in the New Yorker. The restaurant posted a video on Facebook showing a phone and playing a recording of a customer thanking the restaurant for letting her know they were closing. The video is accompanied by the text: “We would like to say what a pleasure it was to serve all of our guests since our opening. Perhaps we will see you all in the near future. THANK YOU!!” The restaurant struggled in part because of a gas issue in the building that forced it to close for six weeks during the spring, wrote David, a restaurant rep, in an email to West Side Rag. Then there was “a huge dip in sales” during the late spring and early summer, he said. “We tried to provide an elevated experience from the service , product, decor and atmosphere. An overwhelming majority praised us for opening up in their neighborhood, stating “There’s nothing else like you guys here.’” Thanks to Lauren for the tip. “Sad. I never got to try the burger,” she wrote. After months of “closed for renovation” signs, a for rent sign appeared on the door of Tiny Treats Cafe at the corner of Amsterdam and 90th street. Last we heard there was a falling out between the owners. Thanks to Yael and Johanna for the tips.