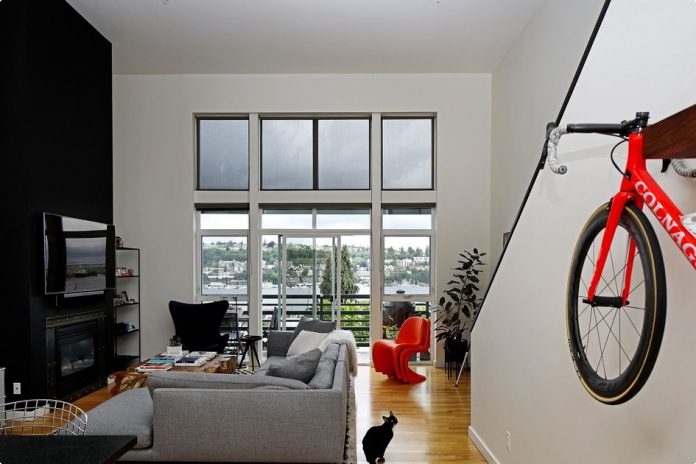 Max Lemmans industrial-cool Eastlake, Wash., condominium is decked out in striking black and white, on all three levels, including the rooftop deck. So are his three four-footed roomies.

Written by By Sandy Deneau Dunham

SEATTLE — Probably, this is just a happy coincidence. Possibly, we suppose, a subconscious leaning. Unlikely, we’re pretty sure, an official design directive.

Max Lemman’s industrial-cool Eastlake, Wash., condominium is decked out in striking black and white, on all three levels, including the rooftop deck.

So are his three four-footed roomies: puppy Navi, and kittens Victoria and Bandita.

“They’re my little entourage of tuxedos,” said Lemman, who lives there with his girlfriend, Ashley.

This is Lemman’s first home. He knew instantly it was The One.

“I’ve always liked higher ceilings, no walls, no doors,” he said. “I walked in here and said: I’m gonna go to the bank.”

Lemman also knew instantly whom to call for aesthetic assistance: interior designer Barbara Hyde Evans, who — more conveniently than coincidentally — is the mother of his former college roommate, Sam.

“We worked together,” he said. “Barbara did a lot of the legwork. She said: We want modern; we want cool. You’re young. You’re a dude.”

Step one, Hyde Evans said: They consulted a stylebook.

“That makes it so easy to get to the style that’s truly him,” Evans said.

Step two: “It also helped to refer to Sam,” Lemman said. “Would he like this? We have the same taste.”

“We painted all the walls white,” Lemman said. “They had been three shades of gray and green. The bathrooms were yellow and red.”

Elsewhere, Hyde Evans said: “It had great bones and industrial things, like that surround on the fireplace. We just painted the fireplace black.”

With black and white establishing the overall modern tone, design threads started to unspool: The chrome of the counter’s Bertoia bar stools also shows up upstairs in the master bedroom’s four-poster bed. Vibrant bursts of tangerine emerge in unexpected ways and places (an orange bike shifts into a work of operational art on a wall near the kitchen).

And, Lemman said: “There’s one iconic chair in each room.”

In the living room, at times, there actually are five: one navy, wool Arne Jacobsen Egg Chair, balanced symmetrically and colorfully by four purposefully portable and stackable orange Panton chairs, which are just as at home in the nearby, highly adaptable office.

“The office plays multiple roles,” Evans said. “Pull up the Panton chairs, adjust the extended arm of the Prouve lamp and the work desk acts as a dining table for intimate gatherings.”

Here, Hyde Evans retained the original wood ceiling but painted the corner black and installed shelves to give depth and architectural interest, she said.

When company comes to call, the daybed pulls away from the wall to act as an extra bed, and even the work desk/table turns portable.

“When we’re entertaining, we move the table to the living room to get the view,” Lemman said.