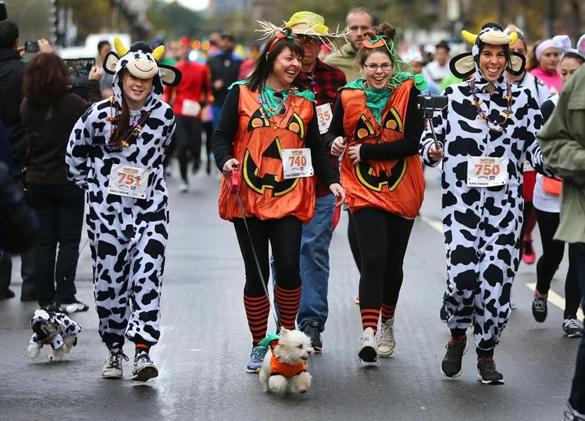 If you’ve never experienced the freedom of running wild through the Boston Children’s Museum sans kids at one of the museum’s Grown-Ups nights, its Halloween party this weekend may be the chance you’re looking for. This year’s party is themed “A Nightmare at the Museum” and will feature a costume contest, prizes from the nearby Yotel, a cash bar, and sweet treats from Montilio’s Baking Company. (Thursday, Oct. 25, from 7 to 11 p.m.; Boston Children’s Museum, Boston; $30; 21+)

There may not be a new season of “Stranger Things” debuting this Halloween like some had hoped, but you can still immerse yourself in the world of the fictional Hawkins, Ind., at the “Stranger Things” pop-up bar at Precinct Kitchen and Bar starting this Friday. Amid ’80s-themed decor, the bar will serve waffle sliders, Barb-themed cocktails, and TV dinners through Nov. 16. (Beginning Friday, Oct. 26, at 4 p.m.; Precinct Kitchen and Bar, Boston; free entry; 21+)

The Coolidge Corner Theatre will test the mettle of area horror movie fans with its 12-hour horror movie marathon starting just before midnight on Saturday. The film fest will begin with 1953’s “War of the Worlds” and 1979’s “Alien,” followed by five UFOs, or “Unidentified Film Offerings,” that will keep viewers on their toes. Be sure to get some sleep beforehand because 12 hours of movies will tire out even the hardiest viewer — and the movies may be scary enough to keep you awake for hours afterward. (Saturday, Oct. 27, from 11:59 p.m. to 11:59 a.m. Sunday, Oct. 28; Coolidge Corner Theatre, Brookline; $25 for a double feature, $30 for all 12 hours of films; all ages)

Get The Weekender in your inbox:

The Globe’s top picks for what to see and do each weekend, in Boston and beyond.

If you want to get a sneak peek of a film likely to contend at the Oscars this year while also contributing to a good cause, consider checking out the 34th Annual Joey O’Donnell Film Premiere. Over the course of more than three decades, the Joey Fund has raised more than $100 million for cystic fibrosis research, including funds raised by the Film Premiere. This year’s screening is “Green Book,” a likely Academy Awards nominee directed by New Englander Peter Farrelly and starring Viggo Mortensen (Aragorn in the “Lord of the Rings” films) and Mahershala Ali (“Moonlight”). Guests will attend a gala earlier in the evening at the Natick Mall, after which they will be taken by limousine to the screening at the AMC Framingham 16. (Sunday, Oct. 28, from 6:30 to 11:30 p.m.; Natick Mall, Natick; $125 donations and up; all ages)

Want more ways to get out of your home and not be bored in the city this weekend? Check out five additional things to do from now through Sunday at boston.com/BosTen.

Kevin Slane can be reached at [email protected]