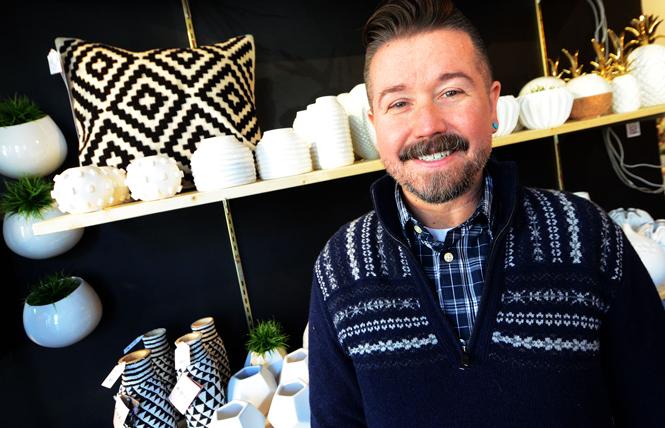 A new gay-owned home decor store is sprucing up the retail scene in San Francisco’s Castro district just in time to assist residents of the gayborhood with their holiday shopping needs.

Stag & Manor is now open at 2327 Market Street having reimagined the storefront that once housed a tax preparer’s office. Gone are the obtrusive awning that once hung on the façade and the red paint that hid the interior’s wood flooring.

In their place are a white palette outside and on the interior walls and a multi-level retail space displaying furnishings, tableware, vases, rugs, and special holiday decorations. Most of the merchandise is fair-trade and made with eco-friendly materials by artisans around the world.

The 1,200 square foot shop is the physical manifestation of Seth Morrison’s one-year-old online retailing site of the same name. The business’ name is derived from his great-grandmother’s family crest in Ireland, which featured a stag and a castle rook.
He had hoped to open the brick-and-mortar location first. But after searching in vain for an affordable storefront, Morrison went live with his website last November in order to launch ahead of the crucial holiday shopping season.

“My dream for a long time was to own a shop so I could come to work and be surrounded by beautiful, gorgeous things,” said Morrison, 44, who has lived in the Castro for a decade. “To be able to serve my own community is wonderful to me.”

He had been working on his business from home until quietly opening the doors to Stag & Manor Friday, November 30. He had an official opening celebration last Thursday, December 6.

“It’s been getting busier and busier now,” said Morrison, who graduated from the University of Illinois at Chicago with a fine art photography degree and relocated to San Francisco 16 years ago after a stint in London.

Next door is D&H Jewelers featuring reclaimed metals and conflict-free gemstones and diamonds, and two doors down is gay designer Kenneth Wingard’s eponymously named home decor boutique. In the other direction are florist Ixia and the Crystal Way shop. By locating amid those retailers Morrison believes he is adding to the retail synergy on that block of upper Market Street and helping to reduce the glut of vacant retail spaces in the area.

“I am hoping it adds value for customers to come here and shop,” he said. “I recommend people check out the other stores near us.”

When he first arrived in the Bay Area, “I had no plan at all,” recalled Morrison as for what he wanted to do professionally.

Friends connected him with a job at Whole Foods Market, which eventually led him to being named the company’s executive director for information technology for northern California. While employed by the national grocery chain, Morrison began to envision owning his own store and wrote up a business plan.

“I would look at these stores around town and think what a wonderful way to spend your day. It was a leap of faith,” said Morrison in venturing into the retail sector himself.

A key step was sourcing the products he would carry, so Morrison began attending trade shows where he met vendors of fair-trade and cruelty-free products. It sparked his idea to focus his business on carrying those kinds of goods.

“Part of the reason why I want to be in business is to make change in the world,” said Morrison, adding that, by carrying fair-trade products, he and his customers “are providing a better life standard for the artisans making the products.”

He carries a variety of throw pillows ($36-$99) made in India, Peru, and Guatemala and woven rugs of various sizes ($49-$899). According to his website, few of the pillows he sells use down feathers. Instead, they are filled with a recycled plastic fiber made from recycled plastic bottles.

A vegetarian himself, Morrison has also designed his own line of sofas using faux-leather fabrics ($1,800-$4,600) that he has manufactured in Los Angeles.

“I love the look and feel of leathers but I don’t like hurting the animals for the leathers,” he explained. “I want to move into organic materials — they are using grape leaves from winery vines to produce a leather-like material but it is not ready for use in upholstery just yet.”

The tableware and dishware he carries ranges in price from $8-$69, while the vases run $12 up to $159. Morrison is particularly fond of products made with two or more materials. For example, he carries a serving spoon ($39) made partly with marble and acacia wood.

Holiday collection
His special holiday collection includes handmade ornaments made by Navajo artisans in New Mexico. There are sand painted ones ($14) as well as ones made using a color banded horsehair pottery technique ($16).

The inventory, both in the store and online, is geared toward a modern, minimalist aesthetic and will change somewhat throughout the year.

“There will be some consistency, but also I will be keeping the store fresh,” said Morrison, whose mom, Sheila Morrison-Grum, flew in from her home in the Caribbean for a week to help with opening the store.

His online sales have been limited to North America as he has yet to line up reasonable international shipping rates. After noticing a customer who had started to place an order for an antelope skull but didn’t complete the purchase, Morrison emailed to see if he could be of help. The man replied that he lived in Scotland and the shipping charges were too high.

Since he was traveling to London in two months, Morrison offered to ship the wall decoration from there once he arrived. The customer took up the offer and added a few more items to his order, all of which Morrison took with him on his flight.

“It was in my carry-on bag,” he recalled, adding that he is “hoping to work that out soon” so that he can grow his business globally.

Stag & Manor is open Tuesdays through Saturdays from 11 a.m. to 7 p.m., though Morrison expects he will be open on Sundays this month due to the holidays.

Five percent of every purchase is donated to seven charities he has chosen, which currently includes Meals on Wheels, the San Francisco Society for the Prevention of Cruelty to Animals, the Black Jaguar/White Tiger Foundation, and Lava Mae. Morrison was unsure how much the philanthropy program has raised to date.

For more information about the store, its products, and the full list of benefiting nonprofits, visit its website at https://stagandmanor.com/.

Cliff’s collects toys, donates for the holidays
Over the Thanksgiving weekend shoppers at Cliff’s Variety donated $5,275 toward the Harvey Milk Civil Rights Academy. For 11 years the family-owned store in the heart of the Castro has taken 20 percent off the bill of those customers who give at least $5 to the local public school. The money raised last month was doubled due to a matching grant.

And the store also collected $2,275 on World AIDS Day toward the AIDS/LifeCycle annual fundraiser for the Los Angeles LGBT Center and the San Francisco AIDS Foundation. Terry Asten Bennett, whose family owns the store, will once again serve as a roadie for the June bicycle ride and her husband, Rich, will again be a rider.

This month through Friday, December 21, the store is collecting unwrapped toys to donate to the Mission Police Station Toy Drive. There is a barrel by the front entrance of the store, located at 479 Castro Street, where people can drop off the toys.