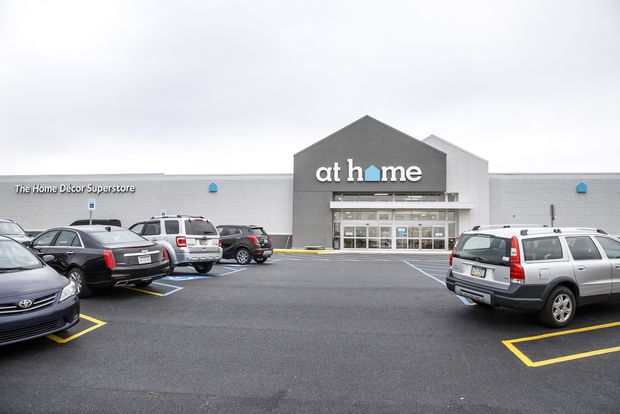 The treadmills and the weights from LA Fitness and the clothing and other items in Kmart have been replaced with Christmas trees, ornaments, wall décor items, rugs and everything and anything to decorate your house.

The former Kmart and LA Fitness locations on Jonestown Road have been replaced by a 125,000-square-foot home décor store. Texas-based At Home opened its first store on Friday in the Harrisburg area following a new store in the York area in 2016 and a new store in the Lancaster area earlier this year.

While the Blue Light Specials of Kmart are long gone, At Home has something called Flash Find sales. Customers are greeted with signs for the weekly “Flash Find” sales as they enter the doors of the store at 5070 Jonestown Road. A new sale starts every Wednesday and lasts for a week. The current sale includes Christmas trees and wreaths. And as shoppers look ahead from when they enter the front door, they will look ahead at the store’s “Main Street” which is a number of displays with the stores featured items which at this time of course include numerous holiday items.

And while the Blue Light Specials are long gone, At Home has numerous blue signs letting shoppers know where certain items are located – and there are tons of them. The retailer says the store has more than 50,000 items. At Home says it offers all the items one needs to decorate any room of the house from clocks and pillows to cushions, bar stools, solar lights, dressers, storage items, art and wall décor, ottomans, sofas and rugs, and everything in between. And the store also has tons of seasonal items which at the moment includes Christmas trees, wreaths, ornaments and other items.

The At Home replaces the Kmart store that closed earlier this year as well as an LA Fitness that closed last year. At Home is in an area with a plethora of stores that specialize in home décor and arts and crafts. The store is in an area that includes the Colonial Commons shopping center and the Paxton Towne Center.

The new At Home store employs around 40 to 50 people. The store’s current hours during the holiday season are 9 a.m. to 11 p.m. Monday through Thursday; 8 a.m. to 11 p.m. Friday and Saturday and 9 a.m. to 10 p.m. Sunday. A grand opening celebration will be held at 8 a.m. Nov. 17. The Texas-based company was founded in 1979 as Garden Ridge Pottery and later named Garden Ridge before transforming to At Home in 2014. The chain has 175 stores in 36 states and has grown immensely since the rebranding.