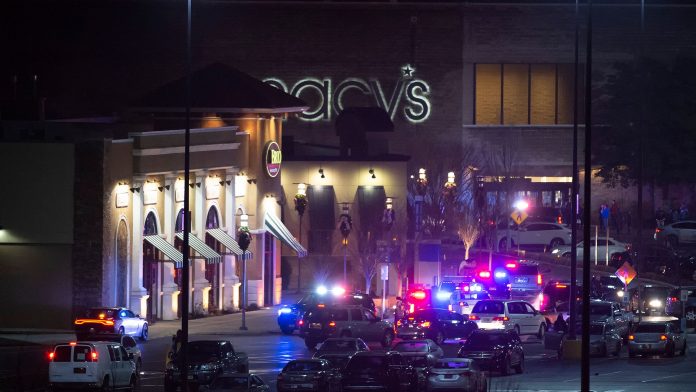 Delaware State Police are investigating multiple reports of shots fired at Christiana Mall on Friday at about 8:47 p.m. No gunfire injuries have been reported so far, police said.

“There is also no physical evidence that a shooting took place,” police said at a news conference.

Police said they were investigating a report of a fight, but they are unsure if it is related.

Many shoppers were on lockdown in stores while police investigated, but didn’t know why and assumed the worst. Others fled the mall on the last shopping weekend before Christmas.

A reunification location has been set up in the Costco parking lot at 900 Center Blvd., police said. The ramps leading to Costco have been reopened so people may reach the lot.

Drivers should expect delays in the area and seek alternate routes, police said.

Michael and Cheri Aumiller were doing their holiday shopping and spontaneously decided to stop by Macy’s. He said he heard what sounded like a gunshot and that people froze. Then twice more, and shoppers were running toward the exit. Abandoned phones, shoes and purchases were strewn across the ground as people rushed out.

Michael Aumiller said the most shocking thing was that no one knew anything. There was no loudspeaker announcement nor police directing crowds outside where go.

“There was a total lack of communication,” he said.

Michael Aumiller said he had just been in disbelief and confused, but when he saw police enter the mall with long rifles and some in military fatigues, that’s when the adrenaline kicked in.

Cheri Aumiller said she was just glad their kids weren’t with them.

“Our daughter would have just been wandering on her own,” she said. “And I don’t know what I would have done.”

Bud Trabbold and Tara Nelson were shopping at Macy’s. She headed upstairs to look at home decor, and he browsed through the men’s clothing on the first floor.

Trabbold said he suddenly saw about 200 people running through the department store from the mall entrance and shouting that there was a shooting.

He was shocked and refused to follow everyone else until he knew Nelson was OK. She and a handful of others on the second floor were ushered into a manager’s room, then to a back stairway.

Beverly Matthews was in the food court when a massive crowd emerged. Someone shouted someone was shooting, and she jumped over Chick-Fil-A’s food counter.

“Hiding back in that kitchen we felt safe,” she said.

Her granddaughter, Miriam Matthews, lost her glasses in the panicked crowd.

One group of shoppers, thinking the worst, huddled in the Bath and Body Works storage room. Many phoned loved ones and waited for any news. The shoppers were evacuated into the parking lot once police secured the building.

Trabbold and Nelson reconnected outside as police surrounded the mall. Several agencies’ vehicles blared sirens as emergency lights lit up the parking lot.

Melanie and Lizzy Braunecker were in a bathroom near JCPenney and heard an employee’s walkie-talkie.

“It said there was a fight and somebody had a gun,” Melanie Braunecker said.

Her husband, Andy Braunecker, was entering the mall near the food court when he saw hundreds of people streaming out.

“It’s distressing,” he said. “I had no idea where they were, and I didn’t know what was going on.”

After police arrived and searched the area, many of the entrances were locked and gated.

Police are unsure if the mall will be open Saturday for holiday shoppers.

The investigation is in its early stages, police said.

Anyone with information about this incident is asked to call Troop 2 at (302) 834-2620. Information also may be provided by contacting Delaware Crime Stoppers at (800) TIP-3333 or at www.delaware.crimestoppersweb.com.

I was evacuated from the Christiana Mall shooting. With a cluster of folks waiting to hear more. One guy calling his store inside to tell them police said to leave the building but they won’t, say they’re worried and staying inside. @delawareonlinepic.twitter.com/kzmpzNoTkm

Wrestling coach charged after being accused of brandishing gun at student

Man charged in hit-and-run death of pedestrian in Harrington