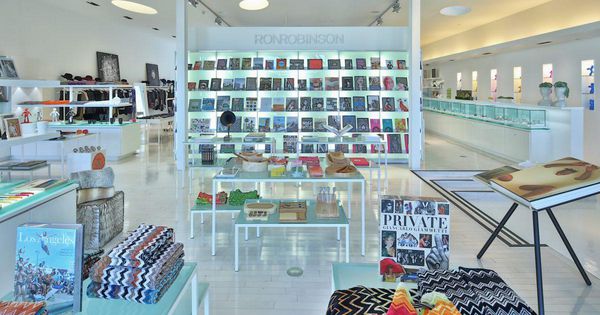 Operating and curating his eponymous boutique at Fred Segal in Los Angeles—Ron Robinson is one of the first names that comes to mind when you think of a California lifestyle brand. But perhaps his biggest accomplishment is staying in business for over 40 years despite the changing retail and economic climate, especially when so many once-thriving boutiques have sadly shuttered. So what’s Robinson’s secret? Perhaps it could be that he is still running his own business the old-fashioned way. Or that he believes good design withstands the test of time in a way the hottest and trendiest items do not. I recently sat down with Robinson to learn about the history of Fred Segal, how he buys items for the store and why a candle isn’t just a candle when it’s made by Missoni.

A Tale Of Three Rons

In 1968, Ron Robinson began working for Fred Segal. During that period, there were two other executives also named Ron (Herman and Ross). Ten years later, each Ron leased his own space from Segal within the landmark building on Melrose Avenue. Robinson focused his business on home decor, children’s clothing and men’s fashion. He also opened up a cosmetics and home fragrance boutique in the same space called Apothia, which is a portmanteau of the words apothecary and utopia.

Ron Robinson currently has two retail stores in Los Angeles, including the original on Melrose Avenue. The other is a freestanding boutique in Santa Monica. This replaced his location at Fred Segal’s location in the same neighborhood, which closed in 2016.

The Art Of Curation

While Los Angeles isn’t short on places to buy home decor—Robinson’s store is a go-to for items you won’t find in most of them. His priority is good design and talent above all else.

For example, he had been eying a furniture designer in Australia for over a year. However, the size of his store isn’t conducive to selling large pieces. So, Robinson had him create a “vessel for fruit,” which became a very popular item.

No matter where he is or what he is doing, Robinson is always on the hunt. He shared a story about his honeymoon in Italy 26 years ago with me. On the Island of Murano, Robinson came across an artisan who was blowing bright colored glass vases. “They were finished in a way that made them look like ancient Italian urns dug up from the soil. They had this combination of contemporary and modern colors, an interesting shape but with an old-world, antique finish,” he explained. Robinson brought back a dozen in his luggage. Then he ended up purchasing 600 units.

Changing With The Times

Sometimes, even Robinson is forced to evolve. While picture frames were always a staple, he confessed to me that those sales nearly came to a halt ten years ago. The innovation of smartphones, digital photography and social media meant people were taking more photos but printing them less often. So while he has always followed his own intuition over what’s trending—Robinson realized sometimes he just can’t stay in the past. He began to carry and even learned to appreciate digital frames.

For years, Robinson carried the Italian label’s textiles including pillows, throw blankets and towels. In 2011, Robinson worked directly with the matriarch of the family herself, Rosita Missoni, on a line of scented candles.

Robinson didn’t want to simply create a fragrance for each of the five candles. He wanted each note to have a story behind it. These scents ended up taking a year to develop.

Designing the beautiful packaging was equally meticulous. Each candle would feature Missoni’s signature chevron in different colors and variations. Robinson shared that this was really the difficult part. One pattern had over seventeen different colors. And like Robinson, Missoni does things their own way. Instead of using Pantone, they gave him a printout of the colors they wanted. Everything would have to be matched visually, which is nearly impossible to accomplish over email. But rather than being frustrated by this challenge, Robinson appreciated their extreme attention to detail, even down to the correct shade of chalk white.

The candles were released in 2014 and sold tens of thousands of units worldwide both through Apothia and Missoni retailers. But just two years later, Missoni signed a perfume and fragrance license deal with a far larger brand. Unfortunately, they believed the candles were an infringement on that license. Ultimately, the brands were forced to cease their collaboration. But Robinson doesn’t regret one moment of the effort and time that went into the project. His appreciation for style and craftsmanship is simply a reflection of Robinson’s approach to everything he does.