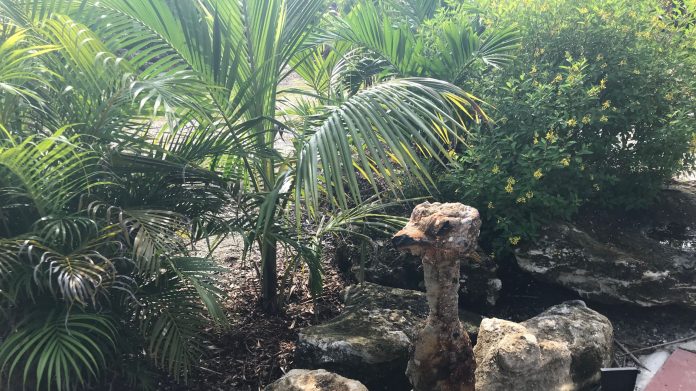 The device had been pulled from the ocean and displayed in the garden sometime in the past year, according to an Army Corps of Engineers contractor.
Mary Helen Moore, [email protected]

INDIAN RIVER COUNTY — An unexploded World War II-era rocket was found displayed in a garden in an Orchid Island neighborhood Thursday morning, prompting the Air Force to respond and dispose of the item.

Army Corps of Engineers contractors working in the area about 10 a.m. stumbled across a barrage rocket and the nonexplosive tail of another rocket, according to senior unexploded ordnance supervisor Greg Peterson.

Peterson said the fuse was gone from the approximately 2-foot-long rocket, but that doesn’t guarantee it’s not dangerous.

“We don’t know, so we assume it’s explosively loaded,” he said.

The items were seemingly being used as garden decorations in St. Christopher’s Harbor, a private lagoonside community in the 1400 block of South State Road A1A.

The small rocket was standing among plants and rocks, with its explosive side resting on gravel.

The nonexplosive base of a World War II-era rocket was found near a potentially live ordnance Oct. 11, 2018 in St. Christopher’s Harbor, a neighborhood south of Vero Beach. (Photo: MARY HELEN MOORE/TCPALM)

Patrick Air Force Base’s Explosive Ordnance Disposal team arrived at the scene about 12:30 p.m. They conducted X-rays and examined the rocket to determine if it was safe to move.

They cleared the area about 1:45 p.m. and headed north on S.R. A1A. They were going back to the base in Brevard County near Satellite Beach, an Indian River County  sheriff’s official said.

No road closures were in effect Thursday, although nearby residents had been advised to evacuate before the munitions searches began.

Indian River County sheriff’s deputies and fire rescue officials responded after the find was reported about 10:30 a.m. and remained on scene until the airmen left.

One unexploded barrage rocket and the non-explosive base of another were discovered about 10 a.m. Thursday.
Mary Helen Moore, [email protected]

Where did it come from?

The Corps has been systematically searching the Vero Beach area for remains left behind during World War II military training exercises, but this is the first discovery of an ordnance since January 2017.

Contractors with the firm Arcadis have mapped the 20,000-acre area stretching from Vero Beach to near Jensen Beach that was home to the Fort Pierce Naval Amphibious Training Base, said Amanda Parker, spokeswoman for the Corps.

The mapping, using what is essentially a high-tech metal detector, revealed a number of sites workers will carefully dig up this year. More work is likely in 2019, Parker said.

Thursday’s discoveries came between two sites at which contractors were digging, Peterson said.

“It all came from the ocean at some point in time,” Peterson said of the approximately 70-year-old debris they found.

Peterson said the rocket, which was caked with shells and barnacles, was not propped up in the garden until this year. He said crews visited the neighborhood in 2017 and did not see it.

During World War II, underwater demolition teams trained offshore and the Navy and Army experimented with beach fortifications expected to be encountered in Europe and Japan.

The post was abandoned in 1946, and the Corps now manages it, as it does all other formerly used defense sites.

Through the years, bombs, rockets and mines have been unearthed by construction, erosion and targeted searches offshore and on the barrier islands.

Most recently, a construction crew unearthed a large rocket, known as a Tiny Tim, in January 2017. It was towed far out in the ocean and detonated underwater.

The Florida Department of Environmental Protection and Florida Fish and Wildlife Conservation Commission are consulted to ensure vulnerable species in coastal ecosystems, like sea turtles and whales, are protected during digs and detonations