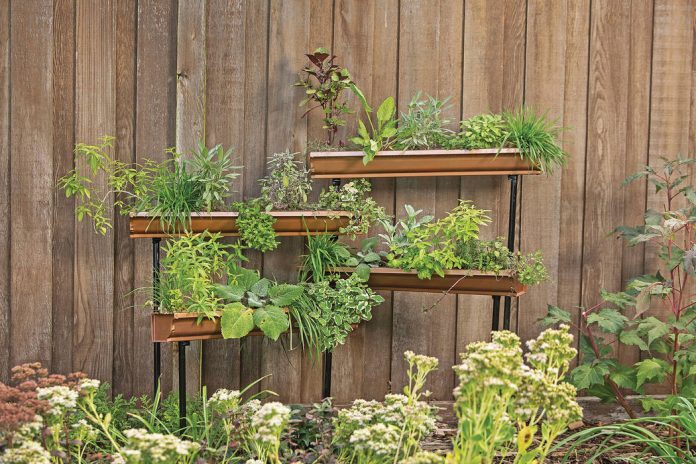 In “Vertical Vegetables: Simple Projects That Deliver More Yield in Less Space” (Quarto Publishing Group), the first-time book author demonstrates how to produce bigger and better fruits and veggies by growing them upward instead of outward in traditional planting beds.

“Pretty much anything can be grown vertically as long as you chose the correct structure for it,” said Andrychowicz, who a decade ago established Get Busy Gardening (getbusygardening.com), a popular DIY blog for beginners.

Vertical gardening has grown in popularity, she said, as more people (including aging baby boomers) have taken up residence in apartments and condominiums.

“So many people don’t have a lot of space, they don’t have big yards, they live in the city. Even in suburbia, they don’t want a huge, ugly garden that they have to take care of sitting in their backyard. They want something to … be small and easily maintainable, to be able to grow stuff right on their deck or patio.”

A longtime gardener, she first experimented with vertical gardening years ago while living in a duplex.

After moving into her first home and building a horizontal vegetable garden, Andrychowicz said, she noticed the larger vining plants crowding one another and decided to trellis them. The result was “one of the best growing seasons I’ve ever had,” she wrote.

Even weighty watermelons and sizeable squash can flourish while suspended vertically from a sturdy — and aesthetically pleasing — garden arch or trellis, she said.

“They’re hanging down, so they’re shaped nicer, they don’t have that ugly spot on them, you don’t have to worry about them sitting on the ground and rotting or getting eaten” by pests.

Visitors to her Minneapolis home are often surprised when they come into my garden and see pie pumpkins hanging from an arch crafted from PVC pipe and standard garden fencing, she said.

In the book, Andrychowicz details techniques for hammocking heavier plants but said she has“never had a problem with any of them ripping off the vine.”

Her yard is filled with a variety of vertical planting structures, many of which she fashioned herself using new, reclaimed and upcycled items, and stationed in unexpected spots.

An entire chapter — brimming with detailed material and tool lists, instructions and photos — is dedicated to building trellises and other structures including a tall, freestanding wooden arch.

There are also guides for constructing a long, wire-arch tunnel that stretches over a ground-level planting bed, creating additional growing space above it, as well as classic- and contemporary-style wooden obelisks, elegant pyramid-shaped structures that are often found in formal gardens.

Thrift-store and garage-sale finds can also be transformed into vertical planters, such as an industrial-style metal utility cart featured in the book. Even old picture frames can be altered to support herbs and other small edible plants while simultaneously decorating oft-overlooked spaces such as walls and fences.

In addition to being able to grow food in a smaller footprint, Andrychowicz contends that larger harvests result from vertical vegetable gardening. The practice also helps to conserve water while preventing fungus and other diseases as well as pests from infiltrating plants.

“If you have things growing vertically … you just have specific spots to water rather than watering your entire garden … which also helps control weeds because those weeds aren’t getting watered,” she said.

However, vertical gardening may not be as easy as Andrychowicz makes it look.

Brandi Eide is the botanical garden supervisor at Springs Preserve. She said the technique “comes with its own inherent challenges.”

For starters, because the soil’s substrate surface is restricted, “You don’t have as much space for roots to grow and develop.” Meanwhile, because soil tends to dry out very quickly in the Las Vegas Valley and throughout the Southwest, “Watering is also a challenge.”

Eide advises vertical vegetable gardeners to employ “a very high-organic content soil that’s going to retain moisture longer. That way, you’re not having to supplement with water as frequently.”

Springs Preserve staffers recently completed renovations on the facility’s own vertical garden wall, which featured succulent plants on one side; an assortment of tomatoes, beans and vegetables on the other; and a drip-irrigation system that kept everything adequately hydrated. (The structure is now used exclusively to grow succulents.)

“I don’t know that vertical gardening is easier than just gardening horizontally,” Eide said. “There are a lot more challenges and it’s probably a lot more time, labor and maintenance intensive from every situation that I’ve ever seen.”