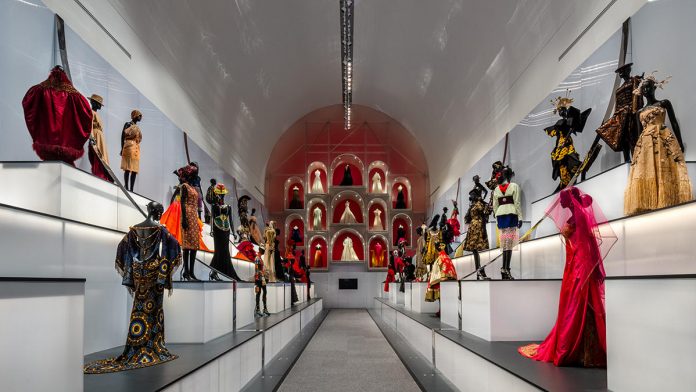 If angels wore haute couture gowns, their closet would be “Dior: From Paris to the World,” on view at the Dallas Museum of Art (DMA) from May 19 – September 1.

This heavenly exhibition embodying the history of the House of Dior and its legendary founder is the closest mere mortals will come to an exclusive Paris fashion show. The design of the exhibition, created by OMA New York, incorporates 178 haute couture looks in 11 sections.

DIOR exhibit at the Dallas Museum of Art.

“The scenography of the show is deeply inspired by the Edward Larrabee Barnes architecture of the DMA building. The structure of the Museum’s barrel vault and four quadrant galleries provided an opportunity for our design firm, OMA New York, to go more vertical in the presentation and create a unique flow pattern and drama in this space. We also drew upon the idea of the garden and the formal gardens that were so clearly connected to Christian Dior and how this theme continued to be mined by all of the Dior creative directors. The exhibition design creates an interplay between different spaces that connect through winding paths, making it a fun and exciting adventure for the visitor,” said Sarah Schleuning, The Margot B. Perot Senior Curator of Decorative Arts and Design. Schleuning is the Chief Interim Curator at the DMA and curator of the Dallas presentation.

Christian Dior’s Fall 1999 show at Versailles l’Orangerie inspired the barrel vault’s transformation, creating a sacred atmosphere with visitors walking a catwalk through elevated rows of the House of Dior’s creations.

“It’s a piece of art on its own,” Dr. Agustin Arteaga, the DMA’s Eugene McDermott Director, said. “You will be walking in what is the cathedral of fashion.”

“Dior: From Paris to the World” made its debut at the Denver Art Museum and the Dallas presentation is the exhibition’s only other US venue. Curated by Florence Müller, Denver Art Museum’s Avenir Foundation Curator of Textile Art and Fashion, the exhibition chronicles Christian Dior’s founding principles and the evolution of the fashion house.

Upon entering the exhibition, visitors are immediately introduced to Dior’s revolutionary “New Look.” Introduced in 1947 as part of Dior’s first collection, the silhouette highlighted the feminine form.

This exhibition features 39 looks by Christian Dior, 13 of which are new to the Dallas presentation.

Stanley Marcus admired Dior’s “New Look” and awarded him the Neiman Marcus Award for his distinguished contribution to fashion. Dior came to Dallas in 1947 to accept the award, becoming fast friends with Marcus. Because of that relationship, Dallas hosted the only American showing of Dior’s 1954 H line collection. Several pieces from that collection are included in this exhibition.

Dior died at the age of 52 in 1957, only ten years after debuting the “New Look” and establishing the House of Dior.

“He had such strong ideas that it really sets the style for decades to come,” Müller said. “One of the reasons why this house is still so important after more than 70 years of history is because they were able to reinvent themselves each decade and to hire artistic designers who were really embracing the moment, the l’air du temps, the zeitgeist of each decade.”

Six designers have led the House of Dior since its founder’s death: Yves Saint Laurent (1958-1960), Marc Bohan (1961-1989), Gianfranco Ferré (1989-1996), John Galliano (1997-2011), Raf Simons (2012-2015) and Maria Grazia Chiuri, who began her tenure in 2016. Pieces from their collections are grouped together in two galleries called “Creative Directors.” The groupings reflect the designer’s distinctive artistic sensibilities as well as their interpretation of Dior’s core ideas.

Each designer’s work mirrors society’s interests and social movements. Müller points out a long red coat created by Marc Bohan. “It is in the mood of the hippies. It’s chic, very well-cut and you have the idea, but it’s not too much, not too over-the-top,” Müller said.

Maria Grazia Chiuri is the first woman to lead the House of Dior, bringing a modern sensibility to haute couture. “She’s a woman. She understands the needs of the woman today. We want to be dressed beautifully, but we don’t want to look like dolls,” Müller said.

This exhibition reveals the House of Dior’s creative process, showcasing original sketches, photographs, runway videos and accessories. A gallery highlights Dior’s intention to create a “total look” for women, with hats, shoes and lipstick to perfectly complement a Dior ensemble. It was a forward-thinking ambition predating the current global branding of the fashion industry.

“This retrospective represents a remarkable occasion for us to showcase an incredible collection of works of contemporary fashion in conjunction with our global collection and objects from our own community. It underscores the importance of artistic inspiration and creativity and how that manifests itself into different media,” Schleuning said.

Based on the success of this exhibition in Denver, the DMA is anticipating crowds. The museum recommends purchasing timed tickets in advance online at www.dma.org.

“Dior: From Paris to the World” is sublime. Plan ahead to savor all of its glory.