Home Garden Take a tour around this light and bright Scandi-style new build in... 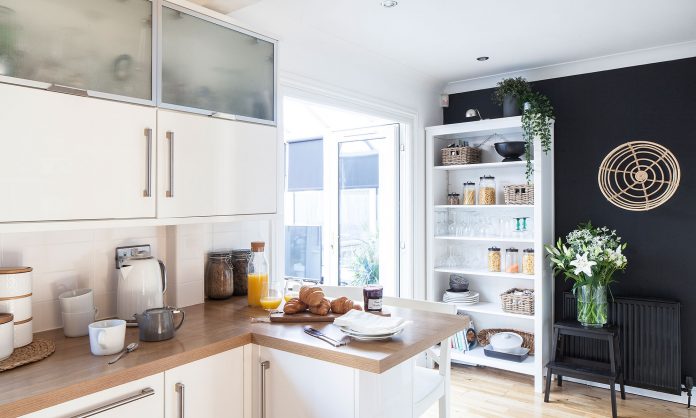 The owners of this new-build turned it from a uniform modern house into  a spacious home, bursting with clever design tricks

‘We had been living in  a small two-bedroom Victorian flat for years and there were always structural problems and damp,’ says the owner of this four-bed new build in Glasgow. ‘It felt like my husband and I were constantly fixing the place – no sooner was one problem resolved, another one came up.’

Our real homes are full of brilliant decorating ideas

With a growing family the couple decided that they wanted a bigger house with a garden. So, when they discovered a new housing development was being built in a good area near them,  they jumped at the chance to own a larger, brand new, low-maintenance house. ‘We chose our house off-plan, and moved  in six months later,’ the owner says.

The couple chose a corner plot as it had a drive, a big garden and didn’t overlook any neighbours. ‘My daughter and son finally had their own rooms, and it was wonderful having the extra space,’ says the owner. ‘Plus, not needing to fix something every five minutes was like a breath of fresh air.’ The only downside was that it was all painted magnolia inside, and lacked the charm and architectural features of their previous home. ‘But it was a blank canvas and I was excited  to add some personality to it,’ the owner says.

Within the year, they had added a conservatory to connect the kitchen with the garden and create a more functional space where they could spend time as a family. ‘The back garden got the sun until early evening every night, so it was a lovely space to be in,’ the owner says. ‘However, in the same year, we discovered I was expecting my third child, so despite all the space,  we knew we would soon outgrow it. We loved our new home and I really didn’t want to move again, so as daunting as it was, we decided to put all our decorating plans on hold and build  an extension. So much for our fuss-free, low maintenance new house!’

The family live in this four-bedroom, semi-detached house in Glasgow, bought in 2002. ‘We bought off-plan so the house was brand new. Every room was painted magnolia and lacked any character,’ says the owner. ‘We’ve extended the property over the years, added  an extra bedroom and built a conservatory. It’s now a spacious and bright home with a Scandi  feel and lots of boho touches.’

The couple decided to add a double-height extension to the side of the property to give them a fourth bedroom with an en suite and a garage/workshop from where they could run our business.  They also decided to create a bigger family kitchen by stealing some space from the open-plan dining area.

‘I was worried about the disruption the build would likely cause, especially having a new baby, but luckily most of the work was completed externally before they knocked through into the main house and, in the end, there wasn’t too much dust or mess,’ the owner says. They fitted the new kitchen with classic white units from Howdens and re-fitted the bathroom and a new en-suite.

‘By rethinking and changing the layout downstairs, we have created different zones where we can either get together as a family or enjoy our own space,’ says the owner.

The owner’s taste has changed a lot over the years and the whole house has been updated, several times. ‘I’ve been known to redesign and redecorate an entire room in a weekend!’ she says. ‘The key for me now is keeping the decoration simple. I love calm, Nordic tones and natural wood but I’m not afraid of a bright feature wall. I like to easily change the colour schemes of the rooms when I get bored.’

‘Our living room has to be my favourite room, as it’s so cosy and welcoming,’ the owner says.  ’I added a real slate feature wall to lend texture and I invested in classic neutral sofas, which always look great no matter how they are styled. I love  how the yellow cushions lift and freshen the room.’

The owner wanted the main bedroom to feel like a luxurious, boutique hotel room, but she couldn’t find the feature headboard she had in mind. ‘In the end, I watched a tutorial online and made it myself,’ she says. ‘Alongside the gorgeous wallpaper, sumptuous cushions and throws in different colours and textures, it really pulls the space together.’

The couple refitted the downstairs cloakroom last year, with a new white vanity unit  and grey subway tiles. ‘Small spaces like downstairs toilets can often look bland,  so I had lots of fun accessorising with yellow and grey towels and hanging planters,’ says the owner. ‘Finally, we fitted new oak floors throughout the downstairs to allow the spaces to flow into one another and changed the stairs from solid wood to oak with glass panelling to brighten  up the entryway.’

Ready for another house tour? Take a look inside this London Victorian semi with a modern edge

‘The house has served us well over the years, and I’m so proud of what we have achieved, and that we made the big changes when we did,’ the owner says. ‘We love our home just as much now as we did all those years ago. Thanks to all our hard work, it’s a modern, welcoming and spacious family home that we all enjoy living in and with my ever-evolving taste, it certainly never gets boring!’