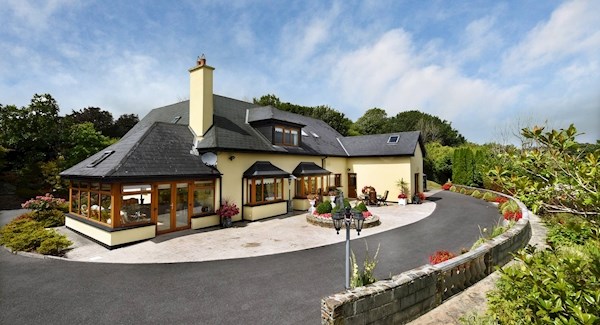 This one-off property in Ballinhassig is a garden paradise that teems with wonderful features, writes Tommy Barker

JUST how many times does one have to downsize, or “right” size?

The question comes to mind on a visit to Rock Lodge, and finding that it was built 14 years ago, for retirement years, by a gardening obsessed couple on the back section of very large grounds and manicured gardens of a previous home, (where they had reared their family), and which they had sold in the early 2000s.

Rock Lodge was to be their final move, and it was even built with the prospect of being able to pass on this exceptionally comfortable build to the next generation, and to live in an independent granny flat alongside, able to admire the fruits of their labours in the intensively landscaped grounds.

That was the plan. But, the reality is the next generation of this clan have work and family and now lives outside of Cork, in London and Dublin, grandchildren have arrived in both other city settings, and all are unlikely to be coming back to roost at Ballinhassig’s Rock Lodge — hence the family’s decision to sell.

Rock Lodge is set by the bottom of Goggins Hill, Ballinhassig, a 10-minute drive west of Cork City, off the N71, and was called after the Rock Lodge area across Cork City at Carrigrohane, where this house’s owners first lived,

The transposed name suits this new setting just fine — this brick-faced, low-slung and large home is close to a wooded valley, with a twinkle of stream turning to a virtual cataract in winter, well below and out of harm’s way, but adding hugely to the overall topography and even, microclimate.

Just shy of 3,500sq ft, very well finished inside, and immaculately presented outside across its lavishly landscaped and all greened-in acre, it also has a detached, lofted double garage, linked via wide car port to the main house. This was built to residential building standards — the granny flat in the wings — and is there now for any new occupants of Rock Lodge to do with as they see fit.

Handily too, the property has a drive right the way around, passing through the deep car port for all-weather decanting of shopping and children, so often there’s no need for drivers to hit the reverse gear thanks to the optional one-way system.

The one-off property’s just newly listed with estate agent Johnny O’Flynn, of Sherry FitzGerald, who guides at €750,000, and who says simply “it’s something special”.

The house is good and spacious, very well finished and kitted out, has that big garage as back-up, and the gardens lift it into another league, yet don’t take massive amounts of maintenance as planting is so dense and it is all pretty well colonised at this stage.

He stresses its proximity to Cork city and the western suburbs, just up and over the hill on the main N71 known as the Liberties (that Bishopstown easy access may well draw medic interest from the likes of the CUH, or from the new, anticipated acute hospital/dental hospital due at Curraheen), while Ballinhassig also has easy access to West Cork via Half Way, to Kinsale, and to Cork Harbour and airport also, via Five Mile Bridge.

Rock Lodge has privacy on its side, set down a sloping drive, with low stone walls and evergreen planting in the main, including slender conifers, deliberately planted to look like some Provencal hill lined with cypresses.

Also forming the mature boundaries (much planting was done ever before Rock Lodge was built, in anticipation), are an array of trees, acers for autumn russet displays, maples, magnolias, rhododendron, camellias and azaleas, a wedding cake tree, and the planting plan means a natural succession of colour through the year.

Spring bulbs including masses of daffs and crocus which typically burst out from from early February through to late March (though the Irish seasons seem to be undergoing a shake-up!), followed by a coloourful riot of shrubs right into June, say the owners, picking out as favourites some early and distinctive rhododendrons, and blazes of purple azalea, falling over stone walls.

Right now Crocosmia lucifer is in full flight, and sturdy summer performers include up to 1,000 summer plantings of bedding such as begonias (the one, main annual job, grown on from a glasshouse), around the patio centerpiece and borders, lasting from from June right through to the first frosts, often into November. And, when removing the dead bedding, the spring bulbs are already stirring…the circle and cycle of life, on the doorstep.

Set around the grounds are mown and surfaced pathways, several easily managed lawns, a polytunnel, glasshouse, raised and lowered beds and, the piece-de-resistance a large pond in a lower garden corner and sheltered sun trap, with sandstone paved surround.

It’s fed by a a natural spring or ground source: Rock Lodge’s own well was bored down about 400ft, and the resulting pressure was so strong that the pond was one way to use the overflow. The year’s summer drought didn’t knock a feather out of the garden’s horticultural demands here at Goggin’s Hill.

The ‘residence’ at Rock Lodge is no mean show either, largely stone faced, and built around a timer frame, by Premier Homes and finished out by a top building crew, including carpenters working with oak joinery, O’Halloran’s kitchens, and a celing plaster specialist also, working around corners and bends, most notably in the feature hall and overhead mezzanine/landing.

It was designed more or less by the couple themselves and laid out to be accommodating over its two, dormer levels, with an en suite ground floor master or guest bedroom, backed up by four first-floor bedrooms, with two rooms en suite.

One bedroom upstairs has been used as a games room, with a home office off, and because it’s a timber frame build, making changes/moving walls is a relatively easy task if new owners want to alter the existing, and pretty well-conceived, layout.

Example? One of the bedrooms adjoins a lofted room above a ground floor art studio, and joining/connecting would be as easy as pie, effectively creating a mini-apartment, with secondary stair access via the art studio by the utility wing, a move that would play well with an older teenage/adult child.

Across the ground floor, off the big hall, is a main, carpteted living room, with feature large open ornate marble fireplace, plus bay window, and the end wall opens to a sun room, set up for year-round use and garden viewing, with gas-insert fireplace in a chunky pine surround, solid roof (with Velux) and Sanderson blinds.

Off the other side of the living room is a formal, dining room with oak floor and double doors to the sun terrace.

The flow of rooms to this side of the house continues then to the kitchen, well-laid out with granite topped solid oak units, and an room-heating stove has been fitted, but the owners opted for an electric one, for ease, and is the first thing they turn on in the morning, even if just for the orange glow of light, to greet the day.

There’s yet more to come. Apart from a utility room, and guest WC, there’s a much used artist’s studio, with mosaic tiled floor and pull-down stair access to a lofted rooms/store, and, a real bit of ingenuity, a ground floor laundry room/walk-through hot press, open to the utility on one side, with radiator and lots of storage for bed linen and clothes airing, and a second door opens directly to the hall and the stairs on the other, for ease of access and bed-making.

As it stands, there’s reams of storage upstairs already, because of the decent space left under sloping eaves in and off several of the bedrooms, and one section alone stores as much Christmas display items and decoration as the average deparment store might need.

Christmas? They love it here. The double height hall, by the stairs, traditionally has allowed for super-sized Christmas trees, up to 16ft tall and that’s because ‘Mrs Claus’ loved the notion of their family seeing the top of the Christmas tree when they open their bedroom doors up on the first floor. And, to top it all, there’s lighting left up year-round on a large pine tree facing Rock Lodge’s front door and porch: Just flick a switch, and it’s Christmas, any day you want.

VERDICT: Just needs a new family to make the very most of it all.