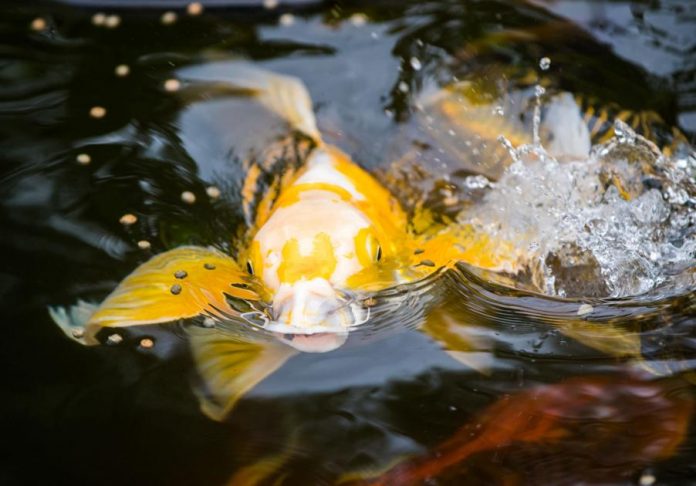 The transformation of Sandra and Peter Barsczeski’s backyard began with a painting by Covington artist Donna Duffy.

Depicting three koi fish swimming among lily pads, the 40-by-40-inch mixed media and acrylic piece hangs in the foyer of their Acadian-style home off Sharp Road in Mandeville.

“In my opinion, this is the best of the koi paintings that she’s done,” Peter Barsczeski said. “There’s just something about it.”

The Barsczeskis brought the painting to life in 2015, commissioning Duffy’s husband, Jed, owner of CJD Construction, to build an oversized koi pond.

“Peter said, ‘Make it look like Donna’s painting,’ ” Jed Duffy said. “I came expecting we’ll have a little koi pond. We got the ruler and started to lay it out in the dirt, and he said, ‘No, bigger.’ ”

Built like a swimming pool — it could be converted to one with a change in filtration and a good pressure washing —the pond’s grand 860-square-foot design measures 25 feet at its widest point by 40 feet long. Its 21,000 gallons of water and 3- to 5½-foot depths create the perfect environment for the 40 to 50 koi that live there.

Koi originated from the German gray carp, which were imported into Japan in 1900s as a food source but became domesticated when breeding resulted in an unusual yellow color, said Peter Barsczeski, who’s done lots of research on the species.

They can live up to 70 years in the right environment and “will get as big as the water volume allows, and based upon how many other fish in it,” he said.

Creating the right environment for koi means setting up a pond correctly and routinely maintaining it, said Jed Duffy, who still keeps up the Barsczeskis’ pond on weekly basis. Guidelines include:

“It helps tremendously in keeping the pond in balance,” Jed Duffy said. “An algae growth is not a problem, as long the water is clear. You don’t want stained water. It doesn’t kill them by any means; it’s just you can’t enjoy the fish.”

The Barsczeskis’ fish range in size from 7 to 30 inches. Their scales and fins are streaked with orange, gold, white, yellow, black and blue, creating a colorful pop against the rich green hues of the surrounding garden.

The painting’s colors also are picked up in the pond’s construction. The Diamond Brite plaster finish was custom tinted a deep green. The gray flagstone surrounding its edge and sitting area was chosen to match the painting’s black and gray tones.

The flagstone was repeated in portions of the cascading fountain at one end of the pond. Besides being a soothing water feature, the fountain also has practical purpose. It fills the pond with fresh water from a well dug specifically for the pond and for watering the gardens.

The fountain’s fresh water helps keep the pond’s temperature from getting too high during the summer months. By purchasing the adjacent empty lot, the couple was able to use it to install the large drainage pipe needed for the pond’s overflow and to plant a variety of fig bushes and trees.

Two nearby magnolia trees, as well as three floating islands filled with pond plants, give the fish some shade. And a faux alligator head keeps away predators that might see the koi as a tasty snack.

The soothing landscape is a perfect spot for the couple’s morning coffee. As their dogs, Mary Ann and Addy, play nearby, the Barsczeskis relax on the flagstone patio. “It’s just so relaxing to watch the fish swimming. It’s so calming,” Sandra Barsczeski said.

Yet, “it’s actually more pleasant in the afternoon because the sun is behind the house. Around 4 or 4:30 when it’s cocktail time, it’s nice to sit out there,” said Peter Barsczeski, who said he’s drawn to water because of his time in the Navy Reserves — he retired as a captain — and from growing up a half-mile from the Atlantic Ocean on Long Island, New York.

It’s during those times that the couple feeds the fish a mix of pellets that enhance their color and maximize their growth. “You don’t have to feed them at all. They eat the algae,” which grows as a result of the sunlight hitting the pond and the fish’s waste, Peter Barsczeski said.

Feeding the fish “is an outing. It’s entertainment,” Sandra Barsczeski said. Steps — built around the pond’s interior as a place to set plants and decorative stones — give visitors a perch to feed them or experience their splashing.

Or, “you can actually swim with them. Donna and I have done it,” Jed Duffy said.

A large, yellow-and-white female — purchased when it was just 8 inches — will eat out of Sandra Barsczeski’s hands. “You can’t name them because then they die,” she said. “If we lose one, we get another one.”

Her belief that comes from experience. About a year after the pond was constructed, there was catastrophe. The filtration system’s UV lights weren’t changed soon enough, and the resulting combination of overgrowth of algae, hot temperatures and too much chemicals added to the water killed nearly all the 35 fish the couple had at the time.

The couple now order from the online retailer Koi to the World, where a particular fish can be chosen from an image on the site. It’s then placed in a bag of cold, oxygenated water inside another bag of oxygen and a special box and arrives on their doorstep the next day.

“I like to buy butterfly (koi) because they’re so pretty,” Peter Barsczeski said.

Or the fish have babies. “The environment in the pond is so perfect that they’ve had little ones the past two years,” Jed Duffy said.