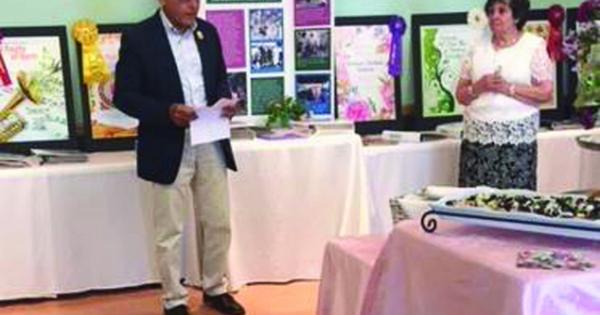 GERMANTOWN — The Germantown Garden Club just celebrated a milestone, a 90th Birthday. The celebration was held on July 21 at the Hover Room in the Germantown Library. On display were many albums of the club’s history that date back to the 1930s, previous flower show posters, award ribbons, and other historical documents.

The club was honored by the attendance of Monica Hanson, president of the Federated Garden Clubs of New York State Inc. and Gary Barrack, Director of the Third District clubs. Their presentation included awarding the club with a framed certificate commemorating this significant milestone.

Founded in 1928 to be an aesthetic, educational, and charitable presence, the club has strived to carry on the work and dedication to these same gardening principles. The first meeting was held in July, 1928.

As part of the club’s archives is a report written by Anne Jennison in 1935 chronicling the first seven years of the club’s history. In this report, we get a glimpse of a young but enthusiastic group of women who created the basis of what the Germantown Garden Club is today. Mentioned is a question as to the club living up to “the object of the organization-which shall be the advancement of gardening, development of home grounds, and furthering of town beautification, to stimulate an interest in co-operative gardening, to aid in the protection of forest, wildflowers birds, etc.” And so we continue to have these same objectives today.

In 1933, to have a formal gardening organization was considered a ‘Garden Club Movement.’

At a special meeting in November of that year, the members formally voted to become part of a new organization, the Federated Garden Clubs of New York State.

This move gave the club membership in the National Federation of Garden Clubs. It is from this seven-year report that we know that the club held “four spring shows and seven annual fall shows.”

The tradition of holding an annual flower show continues to this day. Chief among the archives are yearbooks and flower show schedules that date back to the 1930’s.

One of the club’s major accomplishments was the formation of what is now the Germantown Library.

With the support of town officials, town businesses, and volunteers, the library took shape. On Decoration Day in 1948, the library was dedicated to the town of Germantown.

Over the intervening years, the club has staged an annual Standard Flower Show, provided educational exhibits at both the Columbia and Dutchess County Fairs, taken field trips to interesting and historic gardens, studied horticulture, and have had programs on every imaginable subject related to gardening in any way.

A spring plant sale has been held for many years to raise money for various philanthropies including a scholarship to a graduating high school student, support for a number of local environmental groups, help with the operating expenses of the library, and maintaining a members’ garden and grounds at the town’s historic Palatine Parsonage.

If interested in learning more or joining the garden club, call President Fran Bufi at 518-537-4868.