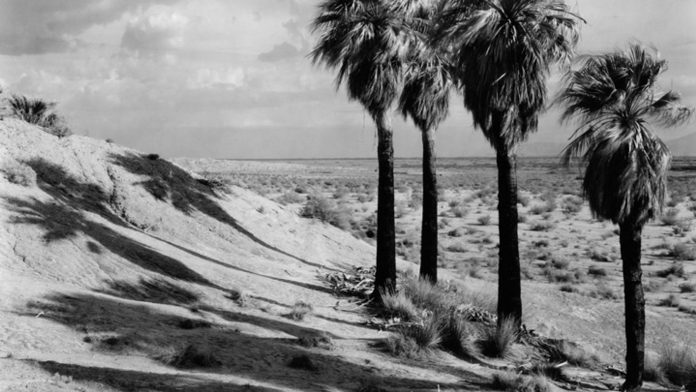 ,
Special to The Desert Sun

The historical use of plants is distinct from xeriscaping popular today. A look back at what was here, and what was planted by expert gardeners a century ago, provides insight on the developmental history of the desert and informs every neighborhood in the Coachella Valley.

Early settlers saw the similarity between the Southern California desert, North Africa and the Mediterranean (names given to Southern California cities and streets reflect this, plucked from the south of Spain or France in the same way that the East Coast of the United States features names reminiscent of Northern Europe, or outright copies preceded with “New”).

The similarity in climate and light caused early desert gardeners to try cultivars from the old world to see what might grow. With the addition of water, many things flourished, but the test was whether they would survive the harsh summer and a winter that is generally colder than near the Mediterranean Sea.

A McKinney family truck, with Eldon McKinney standing on a palm tree, before planting it at the O’Donnell House in 1924. (Photo: Palm Springs Historical Society/Special to The Desert Sun)

Citrus and other stone fruits are an early example of systematically imported plants. Judge McCallum and the Palm Valley Land Company businessmen planted orchards in a bid to supply the coastal markets with early ripening fruit at the end of the 19th century.

By the turn of the 20th century, different varieties of dates, imported from the Middle East, were tested in the sprawling desert of the eastern Coachella Valley to decide the best type of tree to farm.  In between the rows of stately date palms, citrus was planted to make use of the space.

In the aftermath of the Civil War, the Southern Pacific Railroad trudged through the Sonoran Desert given the incentive of owning every other square mile by the U.S. government. Along the tracks, they planted allees of tamarisk trees, imported from South Africa, as windbreaks. Disparaged as too thirsty now, tamarisk is admirably resilient in the harshest of environments having an insistent root system. There are many different varieties, but interestingly tamarisk was introduced in the United States as an ornamental shrub and shade tree in the early 19th century and was planted by the millions to fight soil erosion during the dust bowl of the Great Depression.

Industrial scale farming made use of plants valuable as crops, but pleasure gardeners were free to choose plants merely for aesthetics.

Arguably the mother of modern desert gardening was Melba Bennett. As founder of the Palm Springs Historical Society, Bennett was an avid gardener and encouraged the “sport” as she called it, because it didn’t cost too much, required no specialized outfit, and minimal equipment. She thought it good for the soul and for the body.

Bennett wrote her classic “Palm Springs Garden Book” to encourage newcomers to start digging and planting in order to understand the beauty and unique delicacy of the desert itself. Bennett wrote gardening articles for The Desert Sun and had a monthly feature in the Palm Springs Villager magazine.

In 1956 her collected wisdom was published under the aegis of the Garden Club she had started. In the dedication to her “Palm Springs Garden Book,” Bennett wrote that the little book would answer the inevitable questions of newcomers about what plants would thrive here and how to best grow them. And it would also serve as “An introduction to a ‘sport’ which demands no expensive costuming, which is easier on the temper than golf or tennis, which can be held to a minimum of expense and effort by the introduction of native, drought-resistant plants, or can develop into a purse-taxing luxury, and muscle-developing hobby. … “

Minerva Hamilton Hoyt was an early proponent of desert landscape and its unusual species. Tommy Thompson was establishing the gardening norms for Palm Desert. And Slim and Patricia Moorten expanded greatly the knowledge of desert plants.

They all understood the desert to be much more than a lifeless and barren landscape. The Cahuilla Indians understood the bounty of the desert, depending upon its offerings for everything from food and shelter to medicine and the stuff of religious ritual. A walk through any neighborhood these days finds a sprinkling of plants, with attendant fascinating histories, some native and some historically used imports.

Numerous species of agave, used as a food by the Indians, and as a balm for sunburn, and a natural sweetener were popular for their striking forms. The century plant, pictured in many a brochure of Southern California for its tall blooming stalk, was erroneously supposed to only flower once every hundred years. Gorgeously unlikely Poinciana, Mexican bird of paradise, with its tower of orange and yellow flowers, and riots of bougainvillea offering purple and deep pink decoration, were ubiquitous by the end of the 19th century due to their “oriental splendor.”

The Cahuilla harvested cactus fruits from the many varieties available. The flaming orange tips of ocotillo branches were used for tea, and also as fencing as the spines are menacing, like an organic barbed wire.

Planted hedges demarcated yards and defined property lines. Oleander, despite its toxicity, was commonly used in California, including in the desert. Pink, white and deep fuchsia varieties were found lining roads and imported for the center dividers of freeways as those first crisscrossed the state in the 1950s.

But our eponymous plant is the Washingtonia filifera, the fan palm. It is the ultimate native.The sweet fruit pulp could be eaten raw, cooked, or ground into flour for cakes and the leaves used to make sandals, thatch roofs, and baskets. Found widely in the cracks in the mountains where water can be found, from Joshua Tree to Indio Hills and the from the Santa Rosa mountains to the Anza-Borrego, these palms define the oases that made early life possible in the desert.