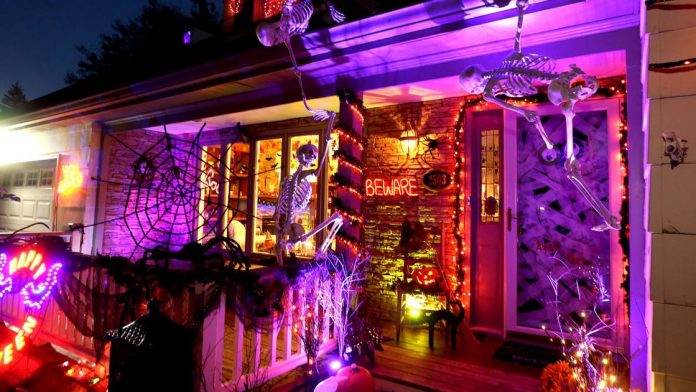 Halloween decorating for Lynda Mink began in earnest in 1978 when she painted a friendly looking ceramic ghost holding a pumpkin.

Where the madness will end is anybody’s guess.

In the intervening 40 years, Lynda and her husband, Bruce, have amassed a vast array of Halloween items, all tending toward the attractive. That is, shiny silver pumpkins and a black throw pillow with the word “BOO” written in jewels. No gore.

The collection once included a slightly creepy object, but “he hasn’t made another appearance since the girls were born,” Lynda said, referring to her two, 4-year old granddaughters, who are the apples of her eye.

Driving down the Minks’ Davenport street, you can quickly guess which home is their’s.

On one side of the house there’s a large blue-and-black inflatable spider, in the middle are three, life-sized plastic skeletons crawling along the gutters, and on the other side, a black witch silhouette stands over a steaming cauldron. A black spider web drapes over the front window and all kinds of accessories are tucked in between.

Up on the roof, a weather vane-like decoration with a witch on one side and a cat on the other twirls around in circles, powered by batteries. This is entirely Bruce’s creation, right down to the base it is attached to that looks like a small, faux dormer affixed to the roof peak.

Walk to the front door and you’ll find that it’s wrapped, mummy-like, with white bandage material that Lynda smudged with brown paint.

Step into the living room and, wow, where to look first?

“It’s everywhere,” Bruce said with a smile. “You have no idea. I think Halloween has taken over Christmas” in the amount of decorating.

“We over-do, then do more,” Lynda said. “All the downstairs gets decorated for the holidays.” (The couple, both retired from the United States Postal Service, even got married on Halloween.)

Perhaps the first thing your eyes will land on inside, though, is the white tipi, about six feet in height, because, really, how many people have tipis in their living rooms?

Lynda made this herself, sewing fabric and stretching it over PVC pipe, holding it taut with a clever, bunge cord-like arrangement of elastic and wooden spools. The tipi is decorated inside and out, providing a “snuggle area” for the granddaughters.

Another feature drawing your eye might be the smattering, here and there, of diamond-shaped, harlequin style patterns painted on various objects, such as candle holders or the risers of the stair steps to the second floor.

Actually, the risers alternate between diamonds and stripes, and neither look is permanent. The patterns are painted on foam board that is taped to the risers and can be removed when the season is over.

Overall, Lynda’s secret to keeping all her decorations in place consists of thin wire, paper clips and 3M Command Hooks. Another secret is that she has started taking pictures of her rooms so that she doesn’t have to rethink from year to year where everything goes.

A bed in a downstairs bedroom is covered with a quilt Lynda made in two shades of orange and a patterned fabric with a Halloween theme. Lamps are draped with spider webbing and a wall shelf is loaded with pumpkins, rats, crows and skulls.

A skeleton lounging in a chair in the TV room gets to stay all year, although Halloween “is his time to shine,” Lynda said.

Speaking of skeletons, Lynda also drives her car with a skeleton sitting next to her in the passenger seat. “We get a lot of looks,” Bruce said.

Then there is the couple’s Halloween wardrobe. Lynda wears a different Halloween-themed shirt just about every day in October.

And for the big day, she pulls out all the stops, wearing a curly, bright orange wig and a black outfit that includes large black boots (of the kind worn by character Abby Sciuto in the NBC-TV show “NCIS”) and black gloves with long, silver fingernails.

Bruce wears a T-shirt that says, “This IS my costume.”