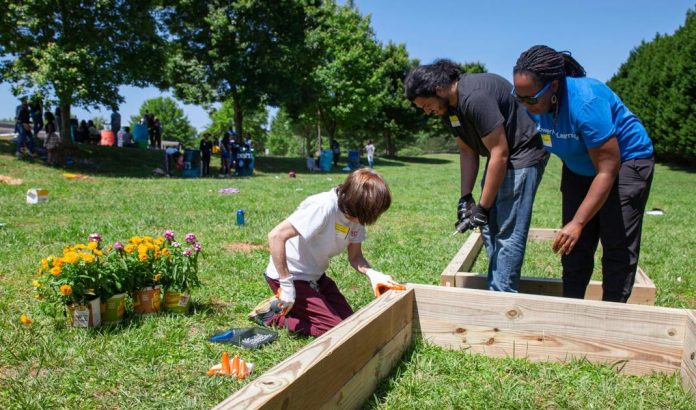 AUSTELL — Students, teachers and volunteers came together at Cooper Middle School on Tuesday to begin construction of a community garden at the school, thanks to a $2,800 grant from a local Home Depot.

Crystal Mast, a seventh grade math teacher and math coach, said the school has had small community gardens a few times over the years, but this one will be different. Mast said bringing the new, self-sustaining community garden will include a greenhouse made partly of recycled materials, high-top tables, benches, raised planting boxes and a rain collection system.

The idea was a collaborative effort between a small group of teachers and the Home Depot at 1062 Richard D. Sailors Parkway, Powder Springs.

“We just kind of started talking. We were all doing the teacher leadership academy through Cobb County, so in that we were to create a legacy project. And we decided that this would be our legacy,” she said.

Mast said the only barrier for the project was money. She said she began searching for donors and sponsors, then, during fall break, she visited the Home Depot and presented the idea to the employees.

“They told us they had some outreach project stuff that they do, and we just started from there,” Mast said, adding that store employees walked them through the grant process, as well as helped them identify the specific materials and plans they would need.

She said they also delivered the materials to the school and provided volunteers to help with safety measures and construction.

“It never could’ve been done without (Home Depot),” Mast said. “We cannot say thank you enough.”

Keenan Pratt, community captain for the Powder Springs Home Depot, said the company conducts a site survey and discusses specific plans with potential grant recipients before deciding whether to award the money.

“We try to do community-based projects, as well as veteran projects, so this is one of the community projects that we were able to do,” Pratt said. “This is a good project. They’re doing a lot of good things here at Cooper.”

Mast said the students are doing most of the construction work and are split into groups to tackle decoration, design, construction and other tasks. She said the school hopes to expand the garden with tilled land to support crops like corn.


Success! An email has been sent to with a link to confirm list signup.


Error! There was an error processing your request.

“We really wanted to also make it not just for our school and our students, but also for the community,” Mast said, adding that crops and plants from the garden will likely be used for projects in class.

Mast estimated that most, if not all the work, would be complete by the end of the day Wednesday.