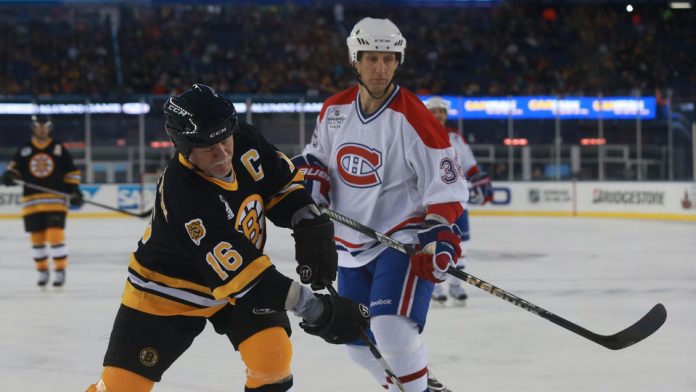 The crowded rafters at the TD Garden are about to get a bit more Nifty.

The Boston Bruins announced Tuesday that they will retire Rick Middleton’s No. 16 jersey in a pregame ceremony on November 29.

Middleton, a Toronto native who averaged more than a point per game for 12 years as a member of the Bruins, said Tuesday he was surprised by the news.

“When it hit me it was like a sledgehammer,” Middleton said. “I’m still in shock … it’s such a great day for me.”

“He didn’t let anything on, he just said, ‘Hey Nifty can you give me a buzz when you get a chance,’” Middleton said. “It could have knocked me off the chair, it was certainly not something I expected from the call, in July, to hear something like that.

“He just caught me so off-guard with it, I actually got emotional when he said it, because it was just a dream come true,” Middleton added.”

“It’s something that obviously you think about, especially over the past four or five years when nobody has worn the number 16, you think maybe, maybe it’ll happen,” Middleton said. “You never know for sure.”

“It was a great honor to call Rick today and let him know that he will join the group of retired numbers in the TD Garden rafters,” Neely said in a news release. “As a player and a person, Rick embodies what it means to be a Bruin, and we are excited to celebrate his career with his family, friends and our fans.”

Middleton was originally selected by the New York Rangers in the first round, 14th overall in the 1973 NHL Amateur Draft. He played two seasons with the Rangers, posting 46 goals and 44 assists for 90 points in 124 appearances, before being acquired by Boston in exchange for Ken Hodge in 1976.

He led the Bruins in scoring four straight seasons from 1978-82 and also led the team in goals six straight seasons from 1978-84. He enjoyed his best season in 1981-82, when he was named a second-team All-Star after scoring a career-high 51 goals. Middleton also earned the Lady Byng Memorial Trophy, awarded annually to the “player adjudged to have exhibited the best type of sportsmanship and gentlemanly conduct combined with a high standard of playing ability.”

“Mr. Middleton’s number 16 has long deserved to be raised to TD Garden’s rafters,” Bruins CEO Charlie Jacobs said in a news release. “I look forward to participating in the events on November 29 as it will be a very special evening for Mr. Middleton and the entire Bruins organization.”

Middleton said he isn’t so much worried about being in front of a large crowd again, as he is about remembering everyone who helped him get to where he is.

“My biggest worry is forgetting somebody I should thank,” Middleton admitted.

“Usually we go up to the alumni suite on the ninth floor, so (the banners are) about at eye level, I can’t miss them,” Middleton quipped. “You know where I really notice them is at Warrior Rink. They’re really the only thing hanging up there, and I can’t lie, sometimes I’ve looked up and between Milt Schmidt and Terry O’Reilly, there seemed to be a lot of room there and I hoped maybe someday my name would go up there, and today’s the day.”