Home Furniture Why move from fashion to the interior design world? 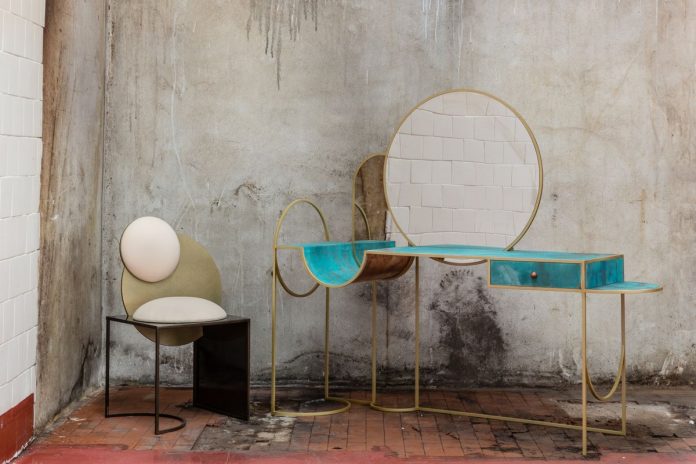 Belgian furniture and decor designer Michaël Verheyden is an avowed minimalist. “I prefer to stay subtle and humble when it comes to design,” he says. Many of his pieces are composed of a single, if exquisite, material – marble, brass or white oak. His shapes are simple – circles, squares – though proportioned in a way that make them pop. His succinctly titled Marble Vase, for example, is composed of two cylinders, the more massive of the two stretching incongruously up from the smaller one.

One of his early mentors was another famous minimalist, albeit in an another industry. To earn extra money as a design student in his hometown of Genk, Verheyden modelled for Belgian fashion designer Raf Simons. The two became friends and Simons encouraged him to launch a line of leather handbags and accessories. The collection was successful – Rick Owens became a customer, commissioning bags for his own collections.

But then Verheyden and his wife, design collaborator Saartje Vereecke, bought their first house. “There were few things that could please us,” he says. “And those few that did were way out of budget, so we decided to develop those products ourselves.” That was 11 years ago, yet he and Vereecke still work the same personal approach today. “We only make things we would want to own and use ourselves,” he says.

In the late 1990s, before Slovenia-born, Britain-based Lara Bohinc had even finished studying metalwork and jewellery at the Royal College of Art London, she had been discovered by British Vogue, when a series of her crisp, geometric headpieces were worn by super model Georgina Grenville and photographed by Maria Testino.

And that was only the start of her successes. She went on to design for many top brands, including Montblanc, Gucci and Cartier, before launching an eponymous collection that was a bestseller at famed department store Harrods.

“But I got bored by the limitations of jewellery,” Bonhinc says. “The weight that an earring can be, or the size of a ring. It’s all very restricting.”

So two years ago, she put her jewellery business on hold to try something new: furniture. Her aesthetic sensibilities have remained consistent. She’s often inspired by astronomical objects and loves compositions, as with her Celeste Chair, where circles and spheres appear mid-orbit, held up by bits of metal.

What’s changed, however, is the scale. “With furniture I find you can be a bit more playful.” she says. “You are only constrained by the space of a room, which can be huge.”

Britain’s Lee Broom designs furniture and interiors. He is particularly famous for his lighting, custom building his own LEDs to create the perfect hue and temperature. With his new Lens Flair pendant, a soft, warm light refracts through the squares of an Art Deco-inspired sphere.

Referencing historical eras is a lesson Broom learned at a very young age, from a very famous mentor. At 18, he entered a country-wide, British fashion competition judged by Vivienne Westwood, whose work often reinterprets the past for contemporary tastes.

After Broom won, Westwood offered him a 10-month internship. “It was an amazing experience,” Broom says. “She taught me to honour the masters of art, architecture and fashion. She took me to Paris. I was only just a teenager, dressing Kate Moss and Naomi Campbell.”

Broom’s plan was to study fashion at Central St. Martens then one day launch his own label. “But living in London is expensive,” he says. So to make extra money he offered decor and styling advice to independent bars and clubs.

“I started by picking upholstery fabrics and mirror frames,” Broom says, “then my commissions got bigger. I started to get accolades and I found myself having a business. I didn’t plan it, but it’s perfect for me.”

In her early 20s, Toronto’s Jaclyn Genovese launched her own fashion boutique, Jacflash, and her own fashion line, Jac & Gill, which she ran with cousin Gillian Young. For almost 10 years, both were among Toronto’s trendiest, with regular customers including film stars (Jessica Alba, Rachel McAdams) and TV personalities (George Stroumboulopoulos, Matte Babel).

But after eight years, Genovese felt her passion had fizzled, so she closed her shop before stumbling into a career in interiors. “I lived above the store,” she says, “so when I shut the business I also needed a new apartment.” She ended up in a dingy fixer-upper. “My friends couldn’t believe I wanted to live in it,” she says. “Two weeks later, I invited them all over and they couldn’t believe their eyes. Many of them asked me to do their places, as well, including NBA player Patrick Patterson.”

Although Genovese doesn’t have an interiors degree, many of the lessons she learned in fashion have carried over. “With both fashion and interiors I often mix textures, fabrics and styles,” she says. “Plus, accessories are the perfect finishing touch for a desired look and there’s no space I design or outfit I put together that is complete without them.”

Montreal’s Richard Ouellette always thought he’d be a fashion designer. A natural stylist, he grew up picking out clothes for his mom and got his first big fashion job at 18, when he was hired to head BRP’s recreational clothing division (think motorcycle and marine wear). But young success – after BRP, he become head designer of outdoor clothing company Orage where he won prizes for his sportwear – doesn’t always lead to a long, happy career.

By the time Ouellette was 30, he was feeling burnt out. “I needed a change,” he says. “I needed to get my passion back. So I left the big job, the big car, the big apartment – everything. I sort of became a kid again.”

Ouellette found his passion again by studying environmental design at the Université du Québec à Montréal. He is now the co-founder of one of Canada’s best interior design and construction firms, Les Ensembliers, a studio that creates the kind of art-filled, timeless interiors that frequently grace the pages of high-end shelter magazines.

“We juggle 30 jobs at one time,” Ouellette says. “It’s high paced, which is something that I learned how to handle in fashion – balancing teams and demands. But when you are designing all the things you love, the work becomes so easy,”

Sebastian Herkner is a young German furniture designer with a talent for balancing technical finesse and playful aesthetics. His Bell Table precisely perches a heavy brass disc on top of a richly hued, narrow glass base (a base that has to be perfectly flat and flush so the whole thing doesn’t topple over and smash).

His technical skills can be traced to his industrial design degree at Germany’s Offenbach University of Art and Design. But mid-degree, he took a break to intern for Stella McCartney; it was a fast-paced place to learn style not to mention society – he once made a gin and tonic for Tom Ford at an office cocktail party.

“In fashion the process of designing is different,” Herkner says of the experience. “The work with colour and the eye on details is more focused. I still work like this; my sketches as very colourful.”

Ultimately furniture won out over fashion, though, and now Herkner’s eponymous studio has won numerous awards and is sold throughout the world. The Bell Table, for instance, is a top seller at chic Canadian furniture store Avenue Road. “Fashion is created in seasons, and is more related to trends,” she says “I don’t like trends. I want to create products which becomes companions for our lives.”

Visit tgam.ca/newsletters to sign up for the Globe Style e-newsletter, your weekly digital guide to the players and trends influencing fashion, design and entertaining, plus shopping tips and inspiration for living well. And follow Globe Style on Instagram @globestyle.