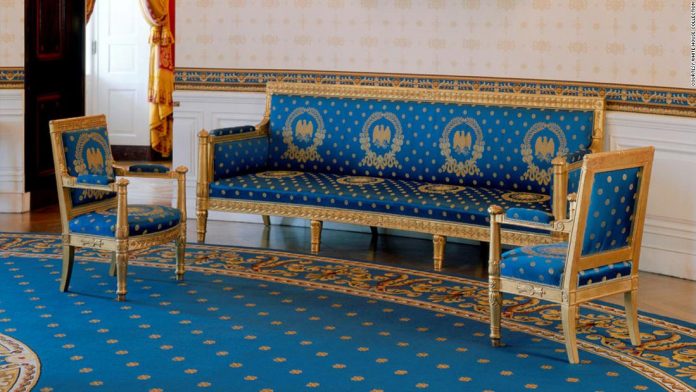 “While some members of Congress and the American public questioned the President’s spending of public funds, Monroe’s reputation as a national hero quieted most of these critics,” according to the association. Monroe had previously served as a diplomat in France and had taken a shine to French décor.

This fall, that same suite of furniture is returning to the Blue Room after a painstaking restoration that took more than 10 years, a team of curators and experts and nearly half a million dollars.

“It is my honor to announce the completion of the first phase of this important and historic project,” first lady Melania Trump said in a statement. “Thank you to the many experts, curators, and White House staff who helped repair the beautiful Bellangé suite. I look forward to placing the restored pieces back in the Blue Room so people on the public tour of the White House will be able to enjoy them.”

The Bellangé suite has had a long and storied history.

The Monroe administration commissioned Parisian cabinetmaker Pierre-Antoine Bellangé to create the furniture in 1817, three years after the White House fire.
But in 1860, President James Buchanan sold the Bellangé furniture at auction to make room for a “Victorian Rococo Revival suite,” according to the historical association.

A century later, first lady Jacqueline Kennedy, who sought to preserve and restore the history of the White House, began the process of reacquiring pieces of the Bellangé suite.

Congress passed a law that deemed that White House furniture, fixtures and decorative objects are considered “inalienable and property of the White House” and cannot be sold. Eight pieces of the original collection were recovered and purchased by the historical association for use in the Blue Room, and additional replicas have been made.

Over the years, the aging, historic furniture was approaching “deteriorating condition.” The restoration process began during the George W. Bush administration in 2005 when White House curators “began to study how to restore the suite to its original appearance,” according to the association, which paid for the restoration.

Before the project could proceed, plans were submitted to the Committee for the Preservation of the White House, which was created by an executive order in 1964 and works with the historical association and Executive Residence staff, for approval.

The team consulted with “experts on early 19th century French upholstery and gilding” and drew from receipts from the original 1817 purchase, the White House said in a news release.

The White House Historical Association said it has “invested more than $450,000 in the restoration of the Bellangé suite since 2013,” or a little more than the cost, adjusted for inflation, of the original purchase two centuries ago.

The furniture has also played an important role in American diplomacy more recently; first lady Melania Trump presented French President Emmanuel Macron and his wife, Brigitte, with a framed section of upholstery from one of the chairs during their state visit earlier this year.