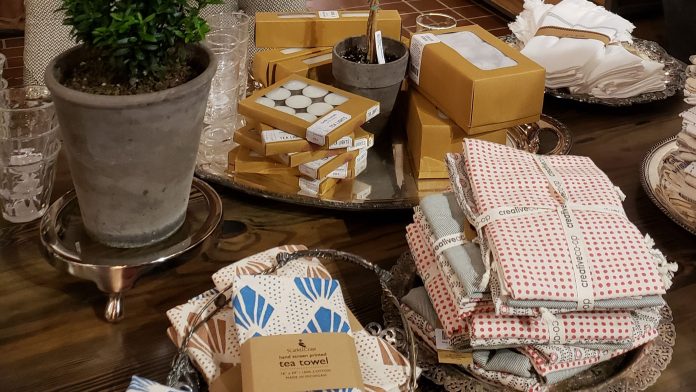 Growing up, Brigid Beaubien was more interested in where her dolls lived and their decor than what they wore. Now Beaubien is channeling that love of home decor with her own store in Midtown called Urbanum. Located at 6545 Woodward in Midtown, the store will feature a mix of furniture, textiles, lighting and more. The 1,800-square-foot shop will also be a dealer for Regina Andrew Design.  “Creating a sense of home is one of the most important feelings in the world,” said Beaubien, who, with her husband, also co-owns 8 Degrees Plato Beer Company. “We want our customers to have the ability to express themselves in their own homes, in their own way, to create a feeling of comfort and hospitality.” To celebrate its opening, Urbanum will host a Housewarming Party from 5:30-8:30 p.m. to benefit Humble Design. It’s open to the public. Urban is open Tuesday through Saturday and 12-5 on Sundays.

Appraiser Gary Piattoni talks with Eric of Wayne County with a foot locker believed to be owned by the Temptations during filming for the “Antiques Roadshow” on the grounds of Meadowbrook Hall. Filming for the “Antiques Roadshow” comes to the grounds of Meadow Brook Hall, in Rochester, Michigan on June 14, 2018. (Photo: Daniel Mears, The Detroit News)

“Antiques Roadshow” fans, set your DVRs for Jan. 7, 14 and 21: That’s when the episodes filmed in June at Meadow Brook Hall will air on Detroit Public Television. In a press release issued Tuesday, “Antiques Roadshow” producers said the segments filmed at Rochester’s Meadow Brook Hall, a National Historic Landmark, will actually kick off Season 23 for the beloved show. More than 2,500 people won free tickets to have their antiques, family heirlooms and other goodies appraised on June 14 by experts in a whole host variety of categories and possibly have their chance to be on TV. Approximately 6,000 items were appraised. The new season for “Antiques Roadshow” will showcase a different format for the popular show with the entire season filmed at historic venues in Sarasota, Florida; San Diego; Tulsa; and Louisville. The Meadow Brook episodes will air at 8 p.m. on Detroit Public Television (Channel 56).

The Michigan Regional Lily Society will host its annual bulb sale on Saturday at the Birmingham Unitarian Church, 38651 Woodward, where gardeners can purchase a variety of bulbs and also tap society members for their expertise. The sale will run from 10 a.m. to 2 p.m. Pictured is a type of bulb called the Double Sensation.To learn more, go to mrls.org, where you’ll also find a list of the varieties that will be available.

The Grosse Pointe Garden Center, a nonprofit that maintains various gardens at the Grosse Pointe War Memorial and hosts lectures and workshops throughout the year, will hold its annual fundraiser — “365 The Joy of Flowers” — from 11:30 a.m. to 2:30 Thursday. Several super fun items will be raffled off, including a Chanel lamp, a two-day stay at a house on Mackinac Island and services such as holiday decorating. Michelle Hodges, president of the Belle Isle Conservancy, is the guest speaker. Tickets are $50. Go to www.gpgardencenter.org or call (313) 499-0743.

Consider it one of the newest wonders of the world: watching a mattress bought in a box come to life. My family bought one earlier this year and we were dazzled. Now, Art Van Furniture has launched its own bed in a box line called Adrenaline. Adrenaline, available in three styles, features all eco-friendly mattresses made from copper-infused gel foam. Available in every size from twin to California king with 10, 12 or 13 inches of support, they’re covered in breathable moisture-wicking fabric dissipates heat better than cotton to keep skin cool and dry. Prices start $599 for a Core twin. Go to www.adrenalinesleep.com/home.