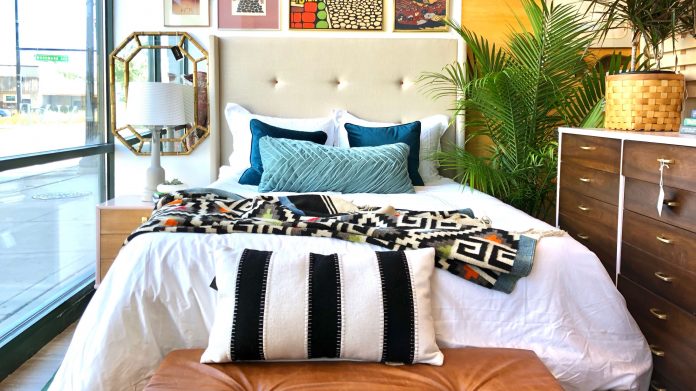 In a former guitar store at the corner of Nine Mile and Woodward, NINE Furniture & Design is making its own music with affordable home décor and interior design services.

Owners Keith Bynum and Evan Thomas, who moved from Colorado a year ago and opened NINE in September, specialize in repurposing and custom making furniture.

“We love turning old forgotten pieces into fashionably functional items,” Thomas said. “In addition to refurbishing, we also love to build new furniture pieces that have a strong sense of style. We are constantly inspired by the Mid-century modern and Art Deco history of the Detroit area.”

They’ll take those custom pieces and design a room with the new furniture as the stars, said store manager Maisha Drew.

“We have a lot of knickknacks that are reasonably priced, too,” she said.

Nearby, Kyle Krzeszak is living his dream. He opened Lucky Star Salon, his own hair studio, in late August after coming up with the name for it several years ago.

“I saw a clip of a movie and the song in the background from it was Madonna’s ‘Lucky Star’,” Krzeszak said. “As a present to me a couple of years ago, my wife registered the name for me.”

Lucky Star Salon has four chairs set up so that the clients and the stylists may chit chat. (Photo: Kyle Krzeszak)

The salon has four chairs and they’re set up so that clients and stylists may chit-chat.

“I wanted it to be comfortable and feel like a happy place,” he said.

Lucky Star is open Tuesday through Saturday in the former Detroit Comics building at 23333 Woodward Ave.

Looking for a statement piece of jewelry or a handbag? Check out Bags ‘n Beads.

Owner Metari Harris Johnson is passionate about finding bold, unusual pieces to put in her 650-square-foot shop at 22750 Woodward Ave., Suite 200, in a former hair salon.

While Bags ‘n Beads has been open more than a year, it was previously open by appointment only. Now guests may wander in Wednesday-Saturday 12:30-7 p.m. or by appointment. (Photo: Metari Harris Johnson)

“I love for people to look fabulous,” she said.

The shop also carries bags from Mary Frances, an award-winning accessories designer whose whimsical pieces include a watering can-shaped purse and a Cinderella-esque princess carriage.

While the store has been open more than a year, it was previously open by appointment only. Now guests may wander in Wednesday-Saturday 12:30-7 p.m. or by appointment. Purchases can also be made online.

Color & Ink Studio, an art studio and gallery, has relocated from Berkley to 20919 John R in Hazel Park, more than tripling its space to 5,800 square feet, said Eric Law, a commercial photographer who co-owns the business with wife Candace Law, a mixed-media artist.

The extra real estate allows the Laws to have a dedicated gallery, classroom and gathering space to host art-related meetings and educational talks. It was completely re-designed and renovated over the past year by Five / Eighths Architecture in Ferndale.

“We have a working studio for photography and visual art, as well as space for workshops in encaustic (hot wax), mixed media and photography,” Eric Law said.

Not only did the bigger building speak to the duo, but they were attracted to the Hazel Park community as a whole.

“Hazel Park is getting a bit of a reputation as a place for young, creative people to move in,” Eric Law said. “They also have an active arts council and that was part of the attraction.”

The barber and menswear boutique, which opened in July, boasts its cheeky tagline — “cuts and stitches.”

Housed in the former Phoenix Café, barber Lyle Hayman Jr. and wife Angie Yaldoo renovated the building themselves to give it an edgy, sophisticated vibe with masculine touches that include a leather couch and dark chocolate-colored walls.

A set of French doors separate the four-chair barber area from the boutique, said Yaldoo, who once managed the now-closed Incognito clothing store in Royal Oak. They carry everything from leather jackets to Levis, much of it with a rock star feel, she said.

“There is something for everyone, even a businessman,” said Yaldoo.

Want more news about stores coming and going near you? Join the Woodward 248 Facebook group page.