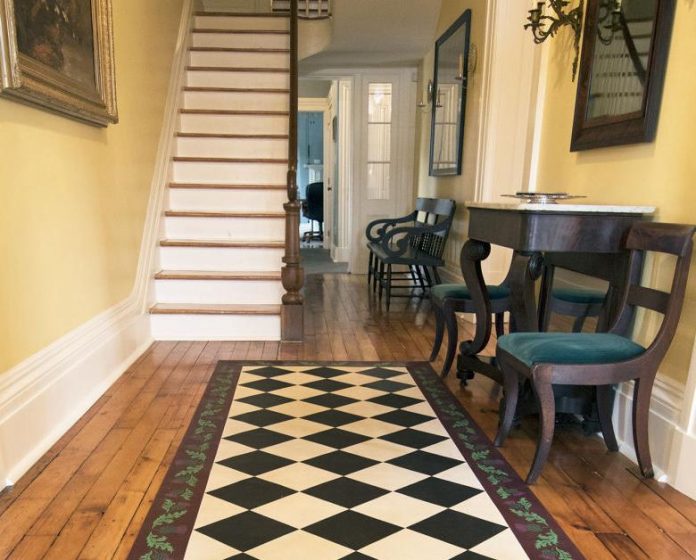 If Samuel and Catherine Brownlee walked into the residence they had built 170 years ago, they would likely feel right at home. The furniture and decor introduced to the grand North Strabane structure by William “Tripp” Kline did not belong to the Brownlees, but every fixture, fabric and color was selected for its authenticity.

“We’re trying to interpret the Western Pennsylvania front, and the way wealthy people might have lived,” said Kline, an antiques expert and Washington County Community Foundation (WCCF) board member.

The Samuel Brownlee House is headquarters to WCCF, having been donated by previous owners William and Saundra Stout in 2013. The nonprofit, which strives to improve the quality of life in Washington County by promoting and facilitating philanthropy, relocated to the property in April 2015 once work on the second floor offices was complete.

Refurbishment of the first-floor Heritage Rooms was the next step in WCCF’s plans for the 7,700-square-foot space. While every room is meticulously appointed, the rooms are not intended to be a museum.

Added Kline, “My grandmother was an antiques dealer, and she always said that antiques are meant to be used.”

Trew said that every square foot of the grand property will eventually be used, including a three-car garage that will be transformed into the Carriage Barn Education Center.

The foundation has put about $1 million – all donations – into the Brownlee House. In addition to Kline acting as volunteer curator of the Heritage Rooms, board member Alex Paris, a contractor, worked as volunteer project manager.

“I lost count of the hours they have put in,” said Trew, who said it was important to protect the house’s history.

And the pre-Civil War house has quite a history to preserve.

Commissioned by Samuel Brownlee when he was 21-years-old for his new wife, Catherine H. Clark, the home was completed in 1848. The Brownlee family, wealthy sheep farmers, had emigrated from Scotland to Washington County in the 1780s. Paintings of the Scottish countryside pay homage to the family’s roots in the home’s main hall.

Subsequent owner Charles M. Miller, who put on an addition in 1967, had the original home placed on the National Register of Historic Places.

The house was sold to the Stouts in 1986, and it served as headquarters for the Atlas Railroad Construction Company until William Stout retired in 2010. WCCF took ownership in 2013.

“We had a nice space before, but this house has really elevated our status in the community,” said Trew.

In addition to providing a workspace for the foundation’s seven employees and many volunteers, the home will provide a meeting or training space for groups. Trew said it will also be open for educational purposes, especially to students.

Each of the restored Heritage Rooms reflects a period of American decor, from 1790 to 1870.

Much of the furniture and decor was donated, and some was purchased or borrowed from the Washington County Historical Society. Trew said that as many local contractors were used in the rehabilitation as possible.

“(Alex) Paris said anything worth doing is worth doing right,” said Trew, “and we’ve done this right.”