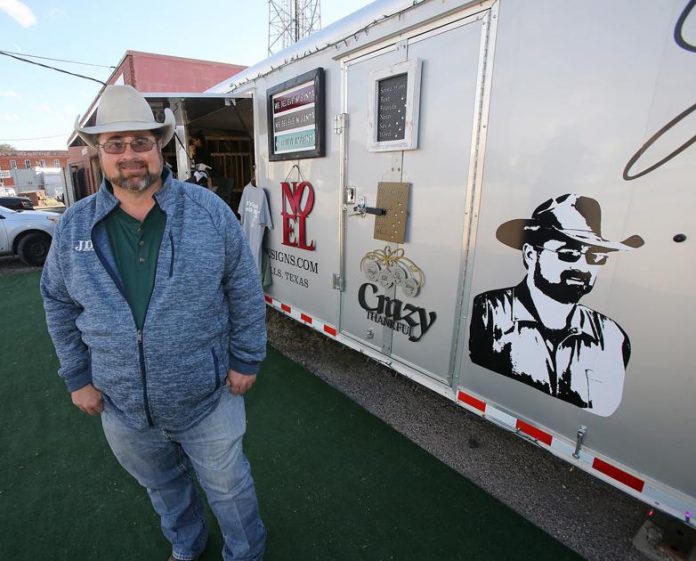 Big as Texas with a drawl and western hat to match, Jimmy Don Holmes stood next to his 36-foot-long trailer parked near Magnolia Market at the Silos.

A train rumbled nearby, but it could not silence the squeals emanating from a Waco Tours bus and Magnolia-branded cart that swept almost simultaneously into the parking lot on a gloriously sunny Saturday.

“Excuse me,” Holmes said, politely breaking away from a conversation about commerce fueled by Magnolia’s popularity. “Let me speak to these folks.”

“Oh, my God, I want to see Jimmy Don,” said a breathless new arrival, bordering on a swoon.

Several couples from the Dallas suburb of Flower Mound joined others from Baton Rouge, Louisiana, in pouring from the vehicles as Holmes approached. He smiled and extended his hand.

That greeting was not enough for Dallas-area resident Becki Johnson, 58. She rounded up a half-dozen people, strategically placed Holmes in the middle, and asked one of Holmes’ JDH Iron Designs staffers to take their picture.

The scene played out almost constantly the visit Saturday. Holmes has become a celebrity, all while selling his metal-crafted products priced from $40 to $150 apiece. He said easily 400 people a day stop by his trailer parked next to the Brake and Clutch Supply building on South Eighth Street, directly across the street from Magnolia Market’s gravel parking lot.

Holmes said he hopes to occupy the building by mid-March. Until then, he will welcome the masses at his rolling retail establishment, built by Continental Cargo and priced at almost $20,000, where he offers signs crafted of steel 14-gauge or thicker and bearing homey and inspirational messages. One saying “I love you to the moon and back” generated several sales Saturday.

“I love it,” Holmes said of his near-celebrity status, the requests for autographs, the attention his business receives. “Joanna (Gaines) made me famous. I tried to deny that for a couple of years, but now I admit it.”

Holmes said he and his father for years operated a metal-crafting enterprise in Crawford called Stars Over Texas. In 2007, he took over the business with help from his wife, Lori, and created a loyal following making wall-hung name badges, business signs, ranch-entrance signs, wall decor and other personalized items. Clients included the Department of Public Safety, country singer Hank Williams Jr., and President George W. Bush and his wife, Laura.

His world changed when a mutual friend suggested Joanna Gaines look him up to make decorative items for the homes she and Chip transformed during episodes of their hit show “Fixer Upper” on HGTV.

“The rest, as they say, is history,” Holmes said.

The budding downtown Waco location, near the spreading influence of Magnolia, would well complement his operations on Texas Star Parkway in Valley Mills, he said.

Holmes said his merchandise sold from the trailer does not duplicate that at Magnolia Market, Sixth Street and Webster Avenue, though fans occasionally stop by his place to have him autograph purchases made elsewhere.

“The Gaineses have been good to me, and I love them to death,” Holmes said. “I would not do anything to jeopardize that relationship.”

Baylor University alumni Sara and Jonathan Martin understand the magic the Magnolia name wields. They opened a shop called Gather at 719 Washington Ave. last year. It represented a combining of Jonathan’s pottery line, Black Oak Art, and Sara’s Kindred Event Studio. Both have blossomed with exposure they received from Magnolia Market, “Fixer Upper” and the Gaineses.

Black Oak Art has been around since 2008, but in recent years has seen employment double to 40 as its wholesale relationship with Magnolia has grown. Depending on the season, the company produces 2,000 to 2,800 pieces for Magnolia weekly, including coffee mugs, vases and pitchers.

The relationship had a modest beginning, Sara Martin said. Joanna Gaines approached her about having coffee cups made as gifts for homeowners featured on “Fixer Upper.” As the Gaineses and their ventures took off, bringing an estimated 30,000 visitors weekly to downtown, orders grew from 50 mugs a week to 250, then 1,000. The lineup expanded, as did the Martins’ capital investment. A bank loan kept business running smoothly, as did securing lease space on Woodway Drive.

The couple recently bought a building at 17th Street and Franklin Avenue once occupied by a dry-cleaning establishment, and planning has started on cleaning and renovating the building for use as a pottery studio within six months.

“I just can’t say no,” Jonathan Martin said with a laugh, commenting on his willingness to do whatever it took to meet Magnolia’s growing demand for merchandise.

Originally from Thousand Oaks, California, he moved to Waco to attend Baylor University at the urging of an aunt living in Texas. He taught several years in local schools and launched Black Oak Art in 2003 as a sidelight.

He recruits new staffers by word-of-mouth, social media and through contacts in the arts departments at Baylor and McLennan Community College. Magnolia’s popularity has allowed him to devote himself full-time to his pottery studio, which counts among its past or current clients the Bear Mountain outdoors store, the Common Grounds coffee shop and the Milo All Day restaurant on Franklin Avenue.

Asked about annual revenues, Jonathan Martin confirmed they are well into six figures, and acknowledged they are crowing seven.

“We’re doing pretty well, growing, keeping busy,” he said. “But what I’ve realized is that in this process, when sales go up, growth becomes expensive. You have to deal with training, turnover, buying more equipment, realizing that when production increases, things wear out and have to be replaced.

“When you’re working out of your garage, everything lasts forever,” he said.

Sara Martin said her shop, Gather, is not going anywhere. It will continue to occupy space in the 700 block of Washington Avenue.

“We liked downtown prior to Chip and Joanna, but now it’s awesome — all these tourists, the creative energy, creation of the cultural arts district,” she said.

Sara Martin, who with her husband met the Gaineses at Antioch Community Church, said she has sold her event-planning, hosting and entertaining emporium, Kindred Event Studio, and is focused on raising her three children and overseeing Gather.

“The Gaineses are friends of ours, and we do not sell anything in our store that can be found in their retail operations,” Sara Martin said. “I can’t overstate how being a Magnolia ‘spinoff’ has benefited us. They have been loyal to us and have believed in us every step of the way.”

She said her shop and the pottery studio are a reflection of Magnolia’s impact, “though probably not as much as Harp.”

Harp Design Co., as most Magnolia fans know, has become a cottage industry, so to speak, for Clint and Kelly Harp. They specialize in custom, handmade furniture and housewares, filling orders online and in-person at a shop on North 15th Street, near downtown. “Fixer Upper” showcased their work.

Harp has created a broadcast niche with the “Wood Work” show on the DIY Network.