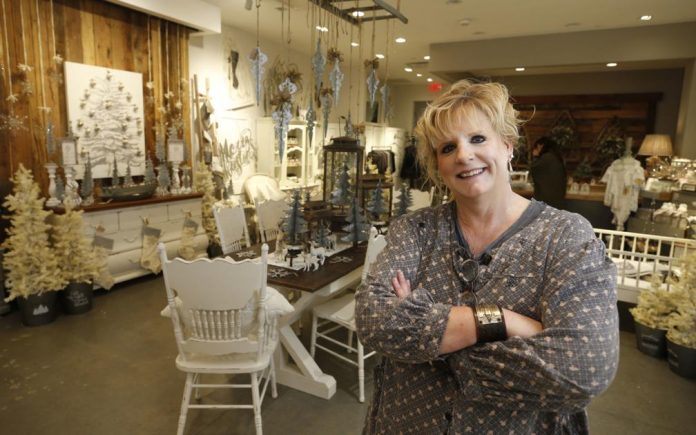 The shabbier an item, the greater the chance that Pam Robbins will see its possibilities.

Robbins and her husband, Ronald, have been acquiring and reselling what she calls “all things vintage, chippy, shabby and covered in rust” for more than a decade.

Their store, Through The Garden Gate vintage home goods shop at 10351 Chamberlayne Road in Hanover County, is filled with home décor, jewelry, clothing, furniture and more.

The couple are taking Through The Garden Gate on the road, opening a holiday-inspired pop-up shop in Short Pump Town Center on Nov. 5. The store will be in the former Collared Greens space in the mall, near the main plaza on the lower level. It will be open at least through the end of the year, she said.

“I think they really like small business out there,” said Pam Robbins, who found out about the available space through a business contact.

She has spent the past few weeks filling the 1,600-square-foot space with items she thinks Short Pump shoppers will like.

“Mostly I want to do home décor, handmade furniture that my husband makes, everyday stuff, some jewelry, soaps, candles, not as many clothes,” she said.

Pam Robbins said she will be splitting her time between the two locations and will have managers at both.

“I actually hired the manager from Collared Greens,” she said. “We will keep both locations in full swing.”

The 40,000-square-foot Conn’s HomePlus store opened Oct. 19 in the Spring Rock Green shopping center at Midlothian Turnpike just west of Chippenham Parkway. The center is across Midlothian Turnpike from the Stonebridge development, where Kroger is an anchor tenant.

Conn’s opened its first Richmond-area store in May 2017 in the Walmart-anchored Eastgate Town Center in eastern Henrico County.

J. Sargeant Reynolds Community College has given a name to the college’s plan to relocate its culinary arts program to a new building in Richmond’s East End.

The 25,000-square-foot cooking school building will be called The Kitchens at Reynolds, the college announced last week.

Construction is underway for the cooking school that is part of a proposed development in Church Hill North at North 25th Street and Nine Mile Road that will include restaurants, apartments and retail space — including a full-service The Market at 25th grocery store in the supermarket-deprived East End.

Reynolds partnered with students at the VCU Brandcenter on a semester-long project to develop the name and brand for the new facility.

The building is expected to open for college programs and services in late 2019, with the first culinary classes offered in the spring 2020 semester.

The Binns of Williamsburg shop was in Merchants Square on Duke of Gloucester Street in Williamsburg for more than 85 years. But no longer.

The family-owned retailer has moved to the WindsorMeade Marketplace on Monticello Avenue off state Route 199 in James City County. The store relocated in September and held a grand opening this month.

Binns lost the lease it had with the Colonial Williamsburg Foundation, which owns Merchants Square.

“You can imagine how heartbroken I was when I was notified through a letter that Colonial Williamsburg was not renewing our lease after having been in downtown Williamsburg for 93 years,” wrote Kimberly S. Jones, president of Binns of Williamsburg.

“I went through many emotions of disbelief, sadness and anger and then finally determination set in to make Binns an even better place in a new location,” she said.