Home Bedroom With 700 Santas collected, Indy man says this year’s display might be... 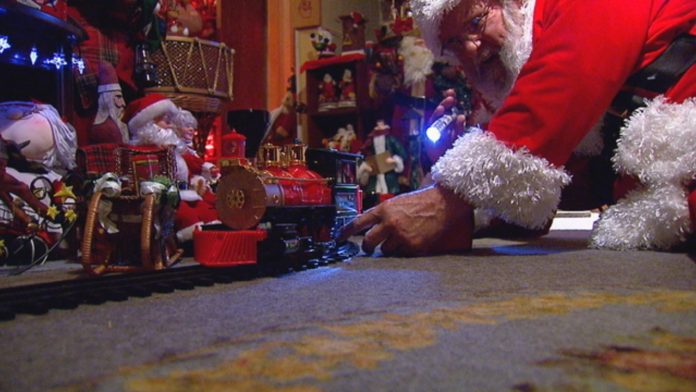 INDIANAPOLIS (WISH) — Chuck Reinking has lived seven decades and collected more than 700 Santa Clauses, some as small as a salt shaker and others larger than life.

“They call me ‘Fat Cat.’ My grandson named me that when he was 3 or 4 years old. And that’s what I’ve been going by for about 15, 18 years,” he said, walking into a room bursting with familiar faces: Santas along the walls, around the fireplace, lining shelves and windows.

“I’ve got just about 720 Santa Clauses here in my house. I enjoy putting them up and buying them. I have people come help me bring them out of the basement. Takes me about a week to 10 days to get them set up,” Weinking said.

The density of Santa memorabilia varies room to room, with a dozen or so pieces in the kitchen and bathroom. One room, dark at first, lights up slowly as Weinking presses buttons, and soon cookie jars, Coca-Cola Christmas decor and a bed-sized toy train track fill the room.

“I take pictures of all of this and I duplicate it by trying to put everything back right where it was, then after I get things all set up, I rearrange them a little bit so they’re not all exactly the same way as they were,” Weinking said.

Weinking doesn’t just collect Santas; he’s also dressed up as Santa, both in Indianapolis and when he lived out of state.

When he was, in his words, “doing Santa’s work” at the Indianapolis Yacht Club in Fishers one year, Weinking said a boy came with his parents and sat on his lap: “And this young kid was dressed to a T, shoes, hair in place, everything was perfect. I asked him what he wanted for Christmas and he said, ‘Santa, I’ve got everything I need. Would you please bring my mom and dad some clothes and some things because they don’t have very much?’ And it just tore me up. And it’s one of the reasons I do this.”

Weinking has people come see the display in his north side home if he knows them or if they call ahead and arrange, but he got his start with Santa by visiting others’ home with gifts.

“Back in 1972, I started playing Santa Claus in Phoenix, Arizona. I was helping Santa, I should say, and we would go over to people’s house and take them toys and things on Christmas Eve. This one on top of my clock there is the only one I brought back from Arizona. He’s the oldest,” Weinking said.

The one sitting beside that 46-year-old Santa might be the last figure Weinking buys: “The oldest and the newest on top of the clock. And I will not be purchasing anymore I don’t think. I really ran out of room in this bedroom and living room and dining room and kitchen.”

“But, I enjoy doing this for the kids that come in. And their eyes just glow like diamonds when they come in. They don’t want too much to do with them when they first come in, but the time they get into this living room, you can just see the joy coming out of them, of watching all of these things turn on,” Weinking said.

One of his favorites is a Santa figure whose red fur coat opens at the belt buckle to reveal a revolving Christmas scene: tree, presents, children in bed, and Santa with a bag of gifts slung over his shoulder, as a reading of “Twas the Night Before Christmas” plays.

Weinking tries to have all of the mechanized Santas prepared for when kids come to see them: “I tear them apart myself and redo them if they’re broken or the batteries are bad.”

It helps to have 50 years of experience as a mechanic with Mercedes-Benz. His skill shows in the way the figures are arranged, the wiring condensed into a few switches in each room. And he knows which button brings each Santa to life.

“I’m 75 years old, but, yes, it does help me a lot to try and be a little bit younger, especially for the kids. The kids enjoy it and I enjoy it.”

Weinking said he’s gotten many of his Santa Claus collectibles from thrift stores and CVS, while others were given to him as gifts.

One of his favorites he can’t remember where he got, but it’s special to him because he considers himself an outdoorsman – he rides motorcycles and camps – and he said he’d never seen a figure of a Santa Claus riding a bear.

And a moving, light-up Santa hat from a yard sale reminds him of a story. He found it on a motorcycle trip for $5 but didn’t have any money with him. The seller told him to take it and bring the money if he ever came through again. So Weinking drove the 20 miles home and 20 miles back the same day to pay for the hat.

While he has enjoyed people giving him Santas in the past, Weinking said he doesn’t have the room anymore, and because of heart problems, this year was probably the last time he would arrange the Santa Claus display. He said he might pass the figures on to somebody else.

A Santa singing “Feliz Navidad”; a snoring, supine Santa; a trio of rock ’n’ roll Santas; a hollowed, painted egg with Santa’s face; and one endlessly climbing a ladder above Weinking’s toy train tracks: They’re all from different times and places, and Weinking can tell you a little bit about each of them.

But the memories of his times “helping Santa” and of kids experiencing his vast collection seem most important to Weinking: “My dad raised me good and I try to be a good person and help people and take care of people. I try to do that. Yes, I do. I hope everyone has a merry Christmas.”