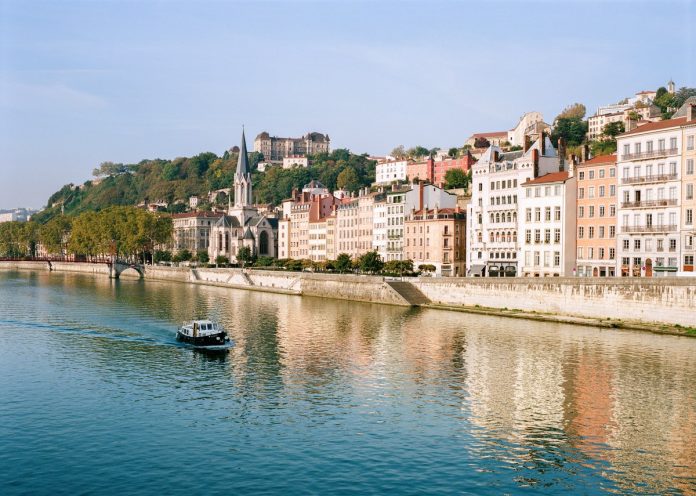 All French roads pass through Lyon, a thriving metropolis halfway between Paris and the Mediterranean sea. Those who stay fall hard for its food and culture—the ancient Romans were so smitten with its strategic location and agricultural promise that they made it one of the empire’s biggest cities. And now there’s another reason to travel to Lyon: a palatial historic landmark has been transformed into a new hospitality hub.

For centuries, the Grand Hôtel-Dieu functioned as a hospital for pilgrims and the poor, with a prominent location at the confluence of the Rhône and Saône rivers. Its foundations date from the 12th century, while the majestic 18th-century facade was created by Jacques-Germain Soufflot, the architect who masterminded the Panthéon in Paris. This is where Rabelais practiced medicine, and major technological advancements were made in the field (the first X-rays, innovative cancer-fighting treatments). But in 2010, the decision was made to move the public hospital to a more modern facility.

Nearly a decade later, the Grand Hôtel-Dieu has been given a new lease on life after a no-holds-barred restoration. The complex houses boutiques, a food market, and the five-star InterContinental hotel and conference center. To follow in the fall: the debut of the Cité Internationale de la Gastronomie, a museum celebrating the important role of gastronomy in French culture.

“We’ve returned to the building’s original purpose: as a place of hospitality,” said General Manager Madelijn Vervoord at a preview of the InterContinental Hotel, which opened on June 4. Locals have a deep attachment to the site—there are 50,000 Lyonnais alive today who were born at the hospital—and now there’s a reason to return. In a first for the brand, InterContinental is creating audio guides to share the stories behind the property.

The four-year hotel project represents the largest private renovation of a historic monument to take place in France. Designer Jean-Philippe Nuel was tapped to oversee the interior decoration. The history of Lyon is reflected in contemporary design accents that pay homage to the silk-weaving industry, along with careful attention to lighting. The city is famous for its annual Fête des Lumières in December, and Nuel described light as the “common thread” unifying the project. His goal was to respect history and avoid showy ostentation, since the site itself is already imbued with such “richesse.”

“The challenge here was that the interiors are classified as a heritage site along with the exterior,” says Nuel, who was also behind the metamorphosis of the legendary Molitor pool in Paris. The designer worked with screens to protect the walls, play with scale, and create a warm, convivial vibe.

The pièce de résistance is Le Dôme Bar, in the former chapel under a soaring 105-foot ceiling. Where the altar once stood in the center of the room, a grand flower display takes pride of place. In the Epona restaurant—named for the Gallic goddess who was said to protect travelers—chef Mathieu Charrois riffs on classic dishes from Lyon. For example, his version of quenelles, poached pike dumplings, has a crispy shell. He sources many of the kitchen ingredients from Les Halles-Grand Hôtel-Dieu, a gourmet market, next door.

Flanking the InterContinental on the other side of the quay are shops like Brochier Soieries, a silk company dating from 1890. The supplier to haute couture houses like Dior, Brochier Soieries is also known for its exclusive reprints of famous artwork. Here you can take part in silk painting workshops, surrounded by a rainbow of framed scarves including ones printed with Yoko Ono’s X-rated vintage photos. There’s also an outpost of the trendy Paris spa and yoga studio called Tigre.

The Grand Hôtel-Dieu complex is connected by a series of landscaped courtyards and vaulted arcades that reflect the traboules, or atmospheric passageways linking Renaissance buildings in Vieux Lyon. While the luxury hotel occupies half the site, the other will soon be home to the Cité Internationale de la Gastronomie.

“To really understand Lyon, you need to come here,” says Damien Blanchard, the museum’s opening manager. After all, Lyon is hailed as the gastronomic capital of France, “if not the world,” says Blanchard. It was none other than Paul Bocuse, the so-called “Pope of Gastronomy,” who helped secure Lyon’s gourmet reputation, so it’s only fitting that the first of France’s four planned Cité venues should open in Lyon. (The others will be in Dijon, Tours, and Rungis, the sprawling wholesale market that feeds Paris.) Bocuse’s cooking “piano,” where he worked for 25 years, will be one of the centerpieces of the Lyon permanent collection.

Lyon’s museum will occupy the oldest part of the Grand Hôtel-Dieu, and historic features—like the wood-paneled apothecary—have been meticulously restored. The Cité Internationale de la Gastronomie won’t just celebrate good eating, but also the importance of nutrition and health. It’s only fitting that it’s in a former hospital reputed for its high rate of healing, and the city where Bocuse pioneered nouvelle cuisine.