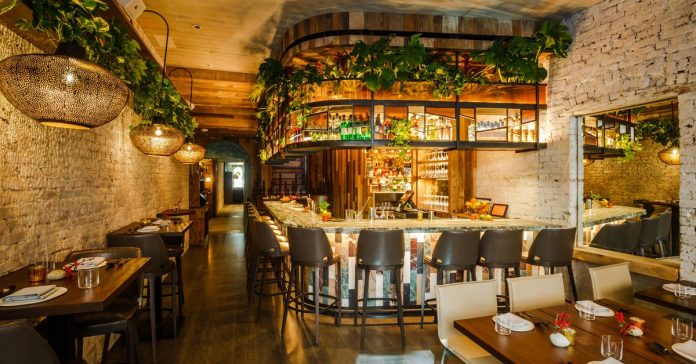 After opening two restaurants in Jakarta last year, Cedric Vongerichten of celebrated West Village restaurant Perry Street and his wife Ochi have brought their attention back to New York. But the time they spent in Indonesia will be clearly present at their newest restaurant Wayan, opening in Nolita this week.

Wayan will be a French-Indonesian restaurant where Cedric — the son of famed French chef Jean-Georges Vongerichten — will play with dishes he tried on a number of visits to the Southeast Asian nation where Ochi is originally from. Opening Friday, February 8, at 20 Spring St., between Mott and Elizabeth Streets, the restaurant will serve food laced with lemongrass, ginger, sambal chile, and other ingredients traditionally present in Indonesian cuisine.

It’s his first solo-venture in NYC. He’s best known for being executive chef at his father’s restaurant Perry Street, where he’ll still reign over the kitchen.

Here, options like satays, yellow chicken curry, sea bass cooked in banana leaves, and Balinese-style suckling pig will be served family-style and meant for sharing, mirroring the meals Cedric enjoyed most while traveling abroad. Last year, the duo traveled to the country to open a hamburger joint called Le Burger and French-American restaurant Vong Kitchen in Jakarta; they also went to places like Bali and Komodo Island while there, cherry-picking what they liked most from each region’s cuisine.

As for the French part of the restaurant, it arrives in “use of technique,” Cedric says. Certain flavors — like that of fermented shrimp paste — will be mellowed for the Western palate, he says. And dishes like the gado gado salad, traditionally a mixture of potato, vegetables, and egg in a peanut sauce dressing, will get a spin. Here, it will instead come with avocado and a peanut relish. Local, seasonal ingredients will also appear from time to time, which he’ll “tweak” with Asian flavors, he says.

“In Indonesia you may not find asparagus, but when it’s asparagus season here, we will have that on the menu,” Cedric says.

Ochi — who also attended the Culinary Institute of America, where the couple met — acts as Wayan’s ultimate taste-tester, a way to ensure it doesn’t stray too far from the original Indonesian-French combo. “She’s a very important part of the [taste]-testing, not only because she is Indonesian, but because I trust her opinion,” Cedric says.

Drinks will include Indonesia’s Batavia-Arak run and Bintang beer, plus cocktails infused with black sesame seeds, ginger, and tamarind. Cedric and Ochi hope that diners will be receptive to Indonesian fare, which she says is rarely found in full-service format in Manhattan. A tiny fast-casual spot called Bali Kitchen exists nearby and Kopi Kopi in Greenwich Village sells Indonesian small plates, but otherwise, most of New York’s small number of dedicated Indonesian restaurants are in Elmhurst.

Nearly every piece of the restaurant pulls inspiration from Ochi’s home country, from the restaurant name — Wayan is a name given to first-born children in Bali — to the warm and green decor. It’s also casual, equipping each table with a spoon and fork, the utensils of choice in Indonesia.

Designed by the Rockwell Group, the interior emulates the bohemian feel of Balinese restaurants, with lots of wood, warm lighting, and greenery throughout, plus artisanal, hand-carved pieces that were made specifically for the restaurant. A bar sits at the front, and an open kitchen fills the center of the space. In the back, the main dining room is surrounded by exposed brick and golden accents, the idea being to make it feel “welcoming and warm,” Cedric says.

“We’re not looking at all to do fine-dining here,” he says.

At Wayan, there’ll be enough room for about 80 diners, including a 10-seat bar. The restaurant will open for dinner only from 5:30 to 11 p.m. starting February 8, with breakfast and lunch arriving later this year.